Scientists Are Using Satellite Technology to Track Whales from Space

A group of U.K. scientists have used high-resolution satellite technology to identify species of whales from space.

Using images taken from 385 miles above the Earth’s surface, researchers from the British Antarctic Survey (BAS) have begun plotting the migratory patterns of four different species of whales, hoping to better understand the giant mammals.

The pictures are captured by the WorldView-3 spacecraft, which can identify objects as small as 12 inches wide. So far the technology has already been used to detect southern rights whales around the Península Valdés, Argentina; fin whales in parts of the northern Mediterranean; humpbacks near Hawaii; and Pacific gray whales in Laguna San Ignacio, Mexico.

“This is the most detailed imagery of whales captured by satellites to date. It’s exciting that the improved resolution reveals characteristic features, such as flippers and flukes, which can be seen in the images for the first time,” said Hannah Cubaynes, lead author of the study and a whale ecologist at British Antarctic Survey (BAS) and the University of Cambridge. “The ability to track whales without traveling to remote and inaccessible areas, in a cost-effective way, will be of great benefit to conservation efforts for whales.”

Some species, like fin and gray whales, are easier to identify because their color contrasts with the water. Meanwhile, the energetic behavior of humpback whales makes them harder to capture in satellite imagery. 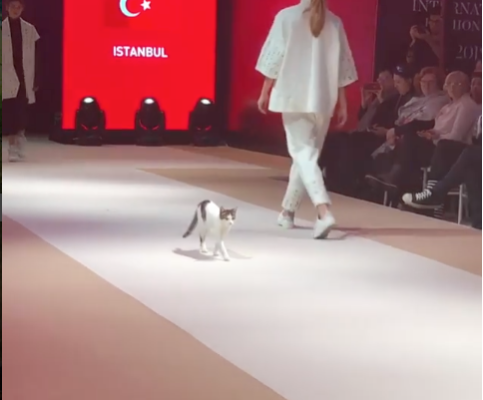 Uninvited Cat Nonchalantly Struts Stuff on the Catwalk As Fashion Show Goes On
Next Up: Editor's Pick