Diddy Is a Dancing, Terrifying Clown for Halloween and You Might Want to Take Notes

Stephen King’s creation Pennywise is scary — just ask the audiences who watched the thriller It this year. But for Sean “Diddy” Combs, dressing up as Pennywise for Halloween is just another chance to show off some very slick dancing.

In an Instagram shared with his 12 million followers on Thursday, the music legend and entrepreneur — unrecognizable behind the iconic white mask, red hair and white outfit of the clown character — got to show off his moves while dancing down a hallway, joined by his family. (Bill Skarsgard, you might want to take notes on this approach.) A clown has never looked quite this comfortable on the dance floor.

This isn’t the first time Diddy and clowns have been a thing. Just last week, Ellen DeGeneres proved he might actually be a bit afraid of them, when she had a clown pop up out of a piece of furniture while he was appearing on her show, sitting on the couch and thinking he was safe. “I’m a black man. I have so many other things to be fearful of — a clown is not going to scare me,” he told her then.

He was wrong. It was a good fright — for Diddy and everyone else — but now it looks like he’s getting the last laugh, with his Halloween look set and ready to scare anyone who comes down his path. Joke’s on you now, Ellen. Hopefully he didn’t give too many kids nightmares when he went out trick-or-treating on Halloween night. 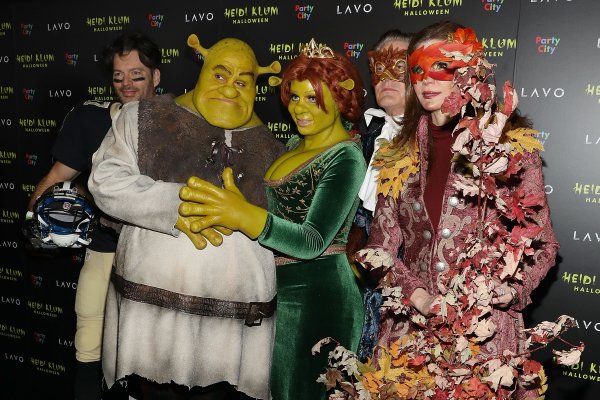 The Most Over-the-Top Costumes From Heidi Klum's Crazy Halloween Party
Next Up: Editor's Pick