The Pittsburgh Attack Inspired Calls for Tikkun Olam. What to Know About the Evolution of an Influential Jewish Idea

In the wake of the mass shooting at the Tree of Life Synagogue in Pittsburgh, many in the Jewish community have invoked the language of tikkun olam in their response to this tragedy. These Hebrew words are typically translated as “repair the world,” or “mend the world,” — or as those who knew one of the victims that day put it when describing his work with refugees, “heal the world.” The phrase tikkun olam, as it has been used especially by American Jews who identify as socially and politically progressive, expresses the conviction that the world is in urgent need of being set right.

The notion that the world is in need of being “fixed” is often regarded as a central teaching of Jewish religious tradition. But what are the origins of this expression, and what has it come to mean to different people and groups in the Jewish community and even beyond?

Variations on the expression tikkun olam have a long and complex history in Jewish tradition. One of the best known and most important of these variations is found in an ancient Hebrew prayer known as Aleynu, in which we find the phrase le-taken olam be-malchut shaddai, typically translated as “when the world shall be perfected under the reign of the Almighty.” In its original setting this prayer intended the eradication of idolatry, but its language, as noted below, has become grist for the contemporary concept of tikkun olam.

Another highly significant traditional source for this concept originates in Jewish mystical tradition. Isaac Luria, the leading figure in the great Kabbalistic community in the Galilee, in the village of Safed in the 16th century, taught his disciples not only to perfect their souls by way of moral purification, but also to perfect the cosmos as a whole, a cosmos believed to have become shattered, especially by way of human transgression. Even though many today invoke Lurianic ideas of tikkun as the basis for a commitment to perfecting the world, Luria’s conception is actually far more esoteric than it is political or social. Still, the two have something critically important in common: the conviction that it is the responsibility of human beings to act in such a way as to fix a broken world.

Whatever its origins, tikkun olam has taken powerful hold in many quarters of the Jewish community over the past several decades. Indeed, it is a ubiquitous expression to the extent that it has come to be regarded as a central feature of what it means to be a Jew in our times — even though that ubiquity is a product of only the last half-century. Shlomo Bardin, a highly influential Jewish educator and founder of the Brandeis Camp Institute in California, was among the first to invoke the language of tikkun olam in the United States, as early as the 1950s. Bardin radically re-interpreted the Aleynu prayer, mentioned above, to refer to the obligation of Jews to work for a more perfect world.

The American Jewish World Service, the leading American Jewish organization dedicated to doing the work of social justice, speaks of its own history in terms of “thirty years of tikkun olam,” and as the core value that has inspired its extraordinary work “to realize human rights and end poverty in the developing world.” Mazon, the most important Jewish organization working to alleviate hunger in this country and elsewhere, was likewise inspired by this conception.

These and numerous other Jewish organizations seek to relieve the suffering of all people in need, regardless of religion, ethnicity or nationality. That is to say, they are universalistic in their humanitarian commitments. We know that the accused perpetrator of the violence at the Tree of Life Synagogue was furious at HIAS, an organization whose early mission was to rescue and protect Jewish refugees in Europe — hence its original name, Hebrew Immigrant Aid Society. But for a long time now HIAS has sought to aid and protect refugees wherever and whoever they are. As Mark Hetfield, president of HIAS, has said: “HIAS was founded in 1881 to welcome refugees because they were Jewish. Today, HIAS welcome refugees because we are Jewish.”

Ironically, this very universal posture, oriented towards all those in need, has been a source of some controversy within the Jewish community. Some believe that the primary obligation of Jews is to fellow Jews, and, even more, that the notion of tikkun olam as a universal concept is actually a distortion of Jewish values. On the other hand, those who advocate an approach to social, economic, political and environmental justice that does not limit its concerns to fellow Jews, argue that it is precisely the centuries-old ethical values of Jewish religious tradition that make concern for all people imperative. In this view, tikkun olam is ultimately a stand-in for a rich tradition of concern for the vulnerable, the powerless and the marginalized. Such a view, according to this perspective, is as old as Israelite religion. Thus, according to the Torah, it is our obligation not only to love our neighbor, that is, a fellow Israelite, but “the stranger who resides with you shall be to you as one of your citizens; you shall love him as yourself, for you were strangers in the land of Egypt.”

The mantra of tikkun olam has not only permeated a vast portion of Jewry, but a measure of its wider cultural influence can be seen in its use by so many others as well. In a Passover greeting to American Jews, President Barack Obama wrote, “together, we can continue the hard but awesome work of tikkun olam, and do our part to repair the world.” And Pittsburgh’s own Mr. Rogers, in the aftermath of 9/11, likewise turned to the phrase.

There may be different opinions about invoking the language of tikkun olam, some of whose greatest proponents themselves believe that it has been overused, and employed in so many different ways and for so many different agendas, as to render its use less meaningful and powerful than it once was. But in light of the current American moment, rife with dangerous social and political hostilities, it seems hard to argue with a resolve to take personal responsibility for creating a more just world, for alleviating human suffering, and for fixing a world in need of so much healing.

Lawrence Fine is Professor Emeritus of Religion and Jewish Studies at Mount Holyoke College. His books include Physician of the Soul, Healer of the Cosmos: Isaac Luria and His Kabbalistic Fellowship. 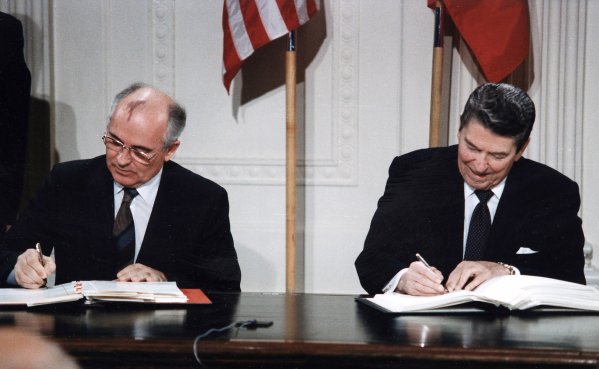 Trump Wants to Leave a Nuclear-Weapons Treaty. Here’s What Happened When Arms Control Failed in the 1930s
Next Up: Editor's Pick