The billionaire who donated over $10 million to a campaign urging the U.K. to vote to leave the European Union is now the subject of a criminal investigation into the “true source” of the funds, raising questions of whether foreign money could have swayed the Brexit referendum.

On Thursday, Arron Banks was referred to Britain’s National Crime Agency (NCA), the body that investigates serious and organized crime, by Britain’s Electoral Commission. Banks is the biggest donor in British political history and a co-founder of Leave.EU, a campaign group for Brexit that was fronted by Nigel Farage during the 2016 referendum campaign. (There is no suggestion that Farage is under investigation or suspected of any wrongdoing.)

Banks said in a statement that he welcomes the investigation and is confident it will debunk the “ludicrous allegations” against him.

At the center of the investigation are $10.3m in loans made by Banks and his campaign to another anti-E.U. campaign group, Better for the Country, $3.8m of which were spent on campaigning during the referendum. “Following its investigation, the Commission has reasonable grounds to suspect that Mr. Banks was not the true source of the $10.3m loans made to Better for the Country,” the Electoral Commission said in a statement.

The investigation into suspected breaches of electoral spending regulations, which began in November 2017, could bring the legitimacy of the leave result into question. It also raises questions of whether foreign money was used to urge the British electorate to vote to leave the European Union in June 2016.

The Electoral Commission’s referral of Banks to the NCA arose out of questions about the role played by a company based in the Isle of Man, an island off the coast of Great Britain outside of the Commission’s authority, in the flow of money between Banks, Leave.EU and Better for the Country.

“They raised this prospect of a company in the Isle of Man which could be the true source of the donations,” Damian Collins, the lawmaker leading the U.K. government’s inquiry into online misinformation, told TIME on Thursday. “What should be investigated is, where did the money come from that was placed in that company’s account? Did the money originate from that company? The concern will be — we raised concerns in our report of the nature of Banks’ dealings with the Russians.”

Reporting by the New York Times and the Observer of London has showed Banks had previously undisclosed meetings with the Russian ambassador to the U.K. during the Brexit and Trump campaigns, during which he was allegedly offered favourable deals to invest in gold and diamonds. Banks acknowledges the meetings but says he did not take up any offers.

Collins said in a separate statement: “We have evidence of Mr. Banks’ discussions with Russian Embassy contacts, including the Russian Ambassador, over potential gold and diamond deals, and the passing of confidential information by Mr Banks. The Electoral Commission should pursue investigations into donations that Arron Banks made to the Leave campaign, to verify that the money was not sourced from abroad.”

Arron Banks blamed “intense political pressure from anti-Brexit supporters” for the decision by the National Crime Agency to open an investigation. “I am pleased that the Electoral Commission has referred me to the National Crime Agency,” he said. “I am confident that a full and frank investigation will finally put an end to the ludicrous allegations levelled against me and my colleagues.”

“There is no evidence of any wrongdoing from the companies I own. I am a U.K. taxpayer and I have never received any foreign donations. The Electoral Commission has produced no evidence to the contrary.”

Banks also mentioned George Soros, a leading funder of liberal democratic movements around the world and frequent figure of hate among right-wing groups. “Isn’t it funny that none of the financial contributions made by George Soros to British political campaigns are ever subject to any level of scrutiny by the Electoral Commission despite his being a foreign national,” Banks said.

Soros reportedly gave $647,000 to Best for Britain, a group that advocates for a second referendum, but not until long after the June 2016 vote. As it was not made during a political campaign, the donation would not have been subject to the same regulations.

“He is the biggest donor in British political history,” Collins told TIME, referring to Banks. “It is a pointless distraction for him to try and bring in other things.” 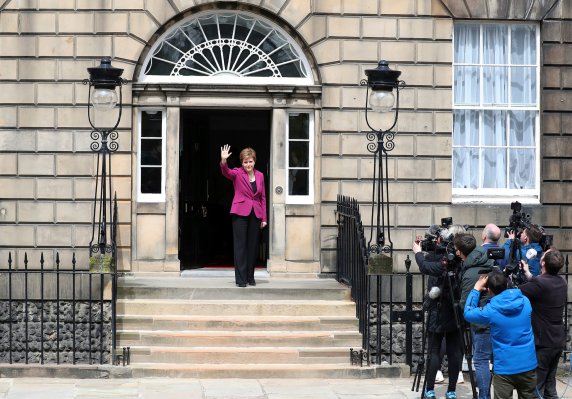 Why Scotland's Move Towards Independence May Prove More Difficult Than Brexit
Next Up: Editor's Pick