A red spray painted number 11, an apparent reference to the individuals slain in Pittsburgh, is seen on the "Guns in America" mural created by TIME and the artist JR on the Houston Bowery Wall in New York City.
Andres Kudacki for TIME
By Abigail Abrams

We asked participants in TIME and JR’s “Guns in America” project to react to the Pittsburgh shooting and to the spray painted “11” on the “Guns in America” mural in New York City. Here’s some of what they had to say:

“As a Marine officer, I fought around the world to stop violent hate. The easy access to guns in this country has made already vile hate deadly. Every time an American kills another American we do the enemy’s job for them. With a week to the election it is incumbent on all of us to elect candidates that make gun violence prevention a priority. “ 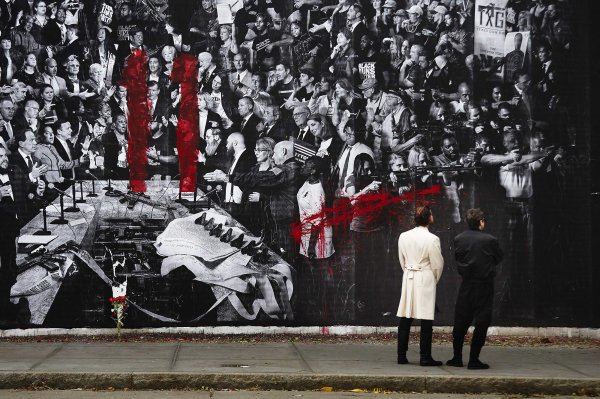 Tolerance and the Gun Debate
Next Up: Editor's Pick