A little girl’s love of the portrait of Michelle Obama went viral earlier this year, and she may repeat the feat with her Halloween costume.

Parker Curry was just a two-year-old visitor to the National Portrait Gallery in Washington, D.C., when she was struck by the official portrait of Michelle Obama by Baltimore artist Amy Sherald. She was captured in a photo absolutely rapt by the portrait.

The image of the little girl staring in awe at the former First Lady quickly went viral, winning over many online. Eventually, the photo of Curry made it to Obama herself and she arranged to meet her biggest fan for a little dance party.

Dancing to Taylor Swift wasn’t the end of Curry’s Obama fandom, though. Buzzfeed reports that Curry went as her role model for Halloween. Curry’s mother, Jessica, told the outlet that when she asked her now three-year old daughter what she wanted to be for Halloween, she didn’t hesitate: “Half of a second later. ‘I want to be Michelle Obama,’ and I was like Whoa,” Jessica said. According to BuzzFeed, the replica dress was made by Alisha Welsh, who runs a small children’s clothing company in New York, who had offered to make the little girl her own version of the dress Obama wore in the portrait when she first went viral.

The pint-sized replica arrived just in time for Halloween. Curry’s mother shared the results on Instagram and it is completely adorable and fit for a politician in training. 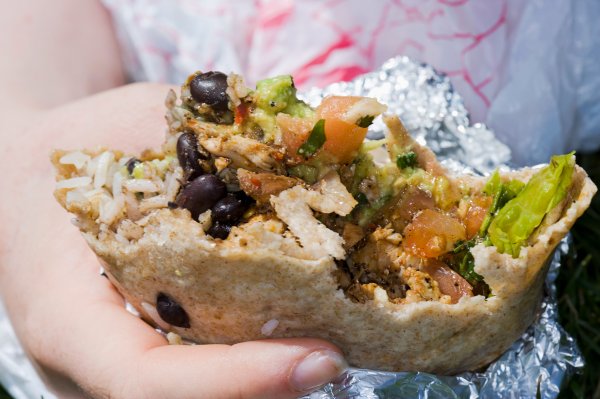 Great News, Internet. It Looks Like Justin Bieber Knows How to Eat a Burrito After All
Next Up: Editor's Pick