Politicians Can't Stop Hate — We Must Change America Ourselves

A memorial tribute outside the Tree of Life synagogue in Pittsburgh on Oct. 30
Brendan Smialowski—AFP/Getty Images
Ideas

America reached a kind of consensus around race after the street fights and legal battles of the 1960s. The naked racism of the previous generation was banished. The likes of the John Birch Society were made outcasts in our politics. But that didn’t mean that prejudice was stripped from the national discourse. The guardrails were simply shifted.”Niggers” were replaced by “welfare queens,” and defenses of segregation gave way to concerns about crime and affirmative action.

Such coded speech and racial dog whistles allowed Janus-faced politicians to decry bigotry in one moment while exploiting hatred and fear in another. Their softened tone obscured what still lurked beneath: the belief that the country belonged, and always will belong, to white people.

Donald Trump has done away with that politesse. Just as he threw away the post–World War II Western order for his “America first” foreign policy, he has snubbed the post–civil rights consensus with explicit appeals to the darker angels and deepest fears of white people. Unashamedly, he exploits gnawing cultural insecurities as the country faces profound demographic shifts.

We know now the true danger of the serpent lurking beneath our politics. The terror of the pipe bombs, the brutality of Jeffersontown, Ky., and the carnage in Pittsburgh have made it tragically clear. A hospital administrator reported that when Robert Bowers arrived at the emergency room after his rampage at the Tree of Life synagogue, he shouted, “I want to kill all the Jews.” He believed Jews were supporting the caravan of “illegal immigrants” threatening to infest the country and to destroy white people. Eleven beautiful human beings were left dead in the wake of his delusion. Alleged mail bomber Cesar Sayoc was obsessed with George Soros, the 88-year-old billionaire Democratic donor and Holocaust survivor. And after failing to enter a black church in Jeffersontown, police said, Gregory Bush wantonly killed two black people at a supermarket nearby. Bush reportedly spared one man because “whites don’t kill whites.”

The belief that white people matter more than others connects these three horrible events. This belief has distorted our democratic principles and disfigured the souls of so many Americans. Each of these men acted cruelly in defense of it. Trump didn’t invent this belief, of course, but he exploits it daily.

The illusion of innocence no longer holds. Thirteen people died senselessly in the span of a week. We must confront the abject ugliness that lurks beneath our cherished way of life, because it’s now in the open for all to see. What is clear, at least to me, is that appeals to the tone of our politics will do little. In fact, such appeals will only lead us, once again, to lie to ourselves or to bury our heads in the sand. These are dark times. And more than ever, we must be the light.

Glaude, the James S. McDonnell Distinguished University Professor at Princeton University, is the author of Democracy in Black: How Race Still Enslaves the American Soul 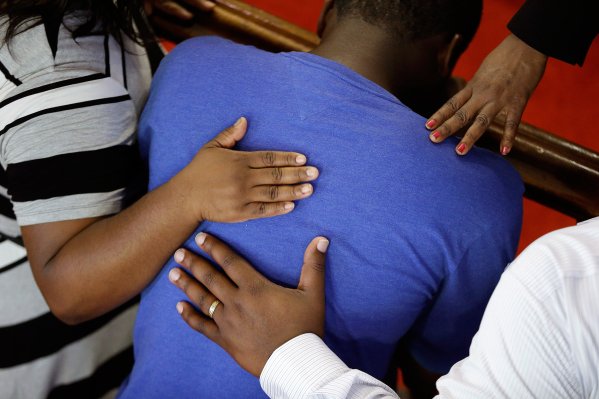 My Sister Was Killed in Emanuel Church. Now I Know Our Hate Problem Is Bigger Than Our Gun Problem
Next Up: Editor's Pick