This should not come as a complete surprise. Brown, 52, a research professor at the University of Houston, has built a mini-empire around the academic study of courage, vulnerability, shame and empathy, at least two of which are required to get on the swings in New York City’s Central Park in broad daylight as an adult and enjoy it. Her realm, the Brené Brown Education and Research Group, includes five best-selling books (the fifth joined the pack in October) and two dozen speaking engagements a year ($100,000 a pop) at outfits as varied as the Air Force and Pixar. A nonprofit, Daring Education, spreads her teaching even wider. Since 2010, when she gave her spectacularly viral TED talk about the power of vulnerability (35 million views and counting), Brown has become one of America’s leading brainiacs on feelings: she’s Oprah with an endowed chair instead of a TV network.

It’s telling that the place Brown gets recognized most often is Whole Foods, the upscale grocery chain that caters to the socially conscious. Brown bursts out laughing upon realizing this, even though most of the stories she hears amid the vegan mac-and-cheese are sad, about people’s divorces and sick children. That’s O.K. with her. “My mom had this really incredible rule when we were growing up, which was we never look away from pain,” she says. “So, if something hard happened, we’d always be the first to go to that house. She said, ‘Look people in the eye when they’re in pain, because when people look away, it makes you feel alone.'” She pauses a moment. “My mom came from hard stuff.”

Given all this, and Brown’s self-proclaimed job description as a storyteller, the subject of her new book seems to come out of left field. Dare to Lead, already the second best-selling nonfiction title on Amazon within a week of its release, is a manual on leadership and management, a subject more popular among the denizens of airport lounges than book clubs. “I want to live in a world with braver, bolder leaders,” she writes, “and I want to pass that world on to my children.” She even adopts business gurus’ passion for pithy phrases, coining “turn and learn,” explaining the difference between “power over” and “power with,” and conveying the necessity of not just discussing difficult issues but “rumbling” on them.

Brown argues that what some see as a move into Tony Robbins’ turf is a perfectly natural progression. “Courage is a prerequisite for all leadership,” she says. And it can be taught. It’s made up of four skills: being vulnerable is the most important, followed by sticking to values, trusting others and persistence. There can be no courage without vulnerability and no vulnerability without the risk of failure. “One of the things that we learned in the research,” she says, “is that people who have the skills to get back up from a fall will engage in smarter risks and more courageous behaviors than people who don’t.”

There are thousands of books on leadership, plenty of which are by people with more experience in leading than Brown has. Indeed, for all her research on the subject, some of her hardest lessons were learned as she attempted to launch her online institute, also called Dare to Lead, after closing her first, COURAGEworks, and rebranding another effort, Brave Leaders Inc. “I’d rather study leadership than lead,” says Brown as we pass a literal pecking order of geese beside one of Central Park’s ponds. But what Brown offers that others don’t is a nerd’s capacity for qualitative data and grounded theory coupled with enough warmth and humor that she moves people rather than merely training them.

Casandra Brené Brown was born in Texas and raised partly in New Orleans. Her path to academic success was unconventional. She bounced around between colleges until landing at the University of Texas at Austin, from which she got her first social-work degree, 12 years after leaving high school. (She also worked at an AT&T call center.) While doing an assignment for her master’s, she noticed a lot of alcoholics in her family tree. Concerned about her own proclivities, she enrolled in A.A.–and gave up drinking, smoking and caffeine the day after she finished her second degree at the University of Houston. “Best thing I ever did,” she says. It’s not just the sobriety. In many ways, Brown’s areas of expertise–about embracing imperfection and being authentic–overlap with her education in the 12-step program.

It’s hard to imagine Brown ever needing much in the way of social lubricants; she claims to be an introvert but has always been a connector. Her mantra before she goes onstage to speak is “People. People. People.” She keeps the lights at 50% so she can see who she’s talking to and describes connecting with an audience as “experiencing the surge.” She can’t walk 20 steps in Central Park without telling the subject of a photo shoot that she looks beautiful or saying “Hellooo Momma!” to a passing toddler. She is as likely to get invited to speak at churches as at universities, to be asked to explain the value of vulnerability to engineers and corporate executives as to social workers like herself. She trains multitudes.

Perhaps because of this, the current era of sharp divisions—of Brexit and a very polarizing President—is not a shock to her. “When I heard the very specific stuff that [Donald Trump] said about political correctness [during his campaign], I thought, Every person who heard that and thinks of themselves as a good and fair person, and does not understand the nature of systemic oppression, feels seen and unashamed for the first time in a long time.” When people are in pain, she says, “they say, ‘Give me an enemy, someone to hate, someone to blame for my pain, and I’ll let you do anything you want.'”

Brown has experienced these divisions firsthand, as when her support of the Black Lives Matter movement led to her getting death threats. “The hardest thing for me is when people say, ‘You changed my life; stop talking about political issues,'” she says. “If people read my work and don’t understand why I’m speaking up on behalf of sexual-assault survivors, then they didn’t understand the work.”

But even in agitated times, Brown is optimistic about the future. “I think we are seeing the last stand of ‘power over,'” she says. “‘Power over’ is about believing that power is finite, like pizza–you have to hoard it and you don’t want people who are different from you to have it.” Outside politics, she sees a desire for a different form of leadership emerging in the thousands of speaking requests she gets every year. “Even in my work with the military, leaders say, ‘There has to be a form of leadership where, when we say turn right, everyone turns right because it’s life or death,'” she notes. “But they’re also questioning any kind of leadership that doesn’t empower and strengthen people and build trust in teams.”

Brown’s move from helping folks with personal change to trying to effect wholesale cultural transformation is ambitious. But she’s energized by it. After all, it’s not so unlike swinging: both require throwing yourself in with abandon and aiming for the sky. 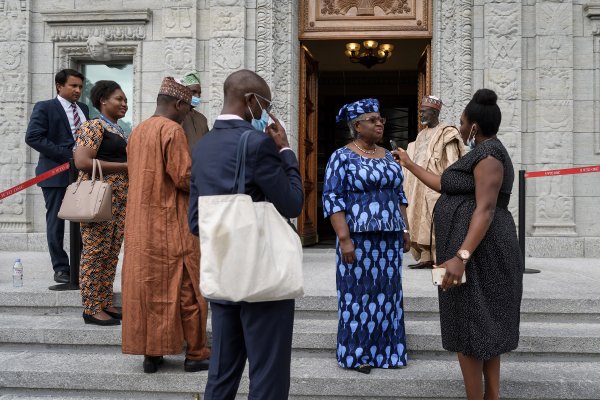 Ngozi Okonjo-Iweala Plans to Reform the WTO
Next Up: Editor's Pick