How Vietnam's New Leader Could Strengthen Ties to China

U.S. Defense Secretary Jim Mattis talks to Vietnamese military officials as he visits Bien Hoa airbase, where the US army stored the defoliant Agent Orange during the Vietnam War, in Bien Hoa city, on the outskirts of Ho Chi Minh city, on October 17, 2018.
KHAM—AFP/Getty Images
By Charlie Campbell/Hanoi

Nestled in Hanoi’s leafy French Quarter, under the shadow of its neoclassical Opera House, is a tiny gallery that exclusively stocks Vietnamese propaganda art. The interior is piled high with posters—all square jaws, oversize clenched fists and primary colors—supporting the revolutionary hero Ho Chi Minh, who founded the Communist Party and led the resistance to French and American forces during the 1950s and ’60s. Slogans rouse patriots to “Remember Uncle Ho on this victorious day” and “Crush the Yankee imperialists.”

“Today Vietnam has a new President,” says Phan Duk, who opened the gallery five years ago. “But I forget his name.” That’s not unusual. Unlike Ho, Vietnam’s recent leaders have shied from the limelight. For almost half a century, they have jettisoned the cult of personality in favor of ruling from the shadows, with power shared between several top government roles.

That changed on Oct. 23 when Communist Party General Secretary Nguyen Phu Trong also assumed the role of President, after the incumbent died in September. In a televised ceremony, the silver-haired Trong, 74, vowed to be “absolutely loyal to the nation, people and the constitution.” His ascent—-confirmed by 99.8% of lawmakers, with just one token dissenter—makes him the first person to hold both titles since Ho in the 1960s. Of Vietnam’s traditional “four-pillar” top positions designed to diffuse power, Trong, a Hanoi native who became General Secretary in 2011, now holds half.

Trong, a party ideologue, has close ties with communist leaders in China, whose regional influence has grown as its $1 trillion Belt and Road Initiative has helped fund infra-structure projects in countries across Asia and beyond. Washington’s influence on the region, by contrast, has waned under President Donald Trump, especially after he withdrew the U.S. from the Trans-Pacific Partnership (TPP) intended to reduce regional reliance on Beijing.

Vietnam is playing a growing role in the U.S. Indo-Pacific strategy to counter Chinese leader Xi Jinping’s attempt to recapture “center stage in the world.” In October, en route to Vietnam for his second visit this year, Defense Secretary Jim Mattis condemned Beijing’s “predatory economic behavior” against smaller nations. But Trump’s “America first” approach to foreign policy has weakened regional alliances. “Standing up to China is even more difficult for Vietnam under Trump than it has been,” says Carlyle Thayer, emeritus professor at the University of New South Wales in Australia.

Although Vietnam’s economy is among the best performing in Asia, with GDP up 6.8% year on year in the second quarter of 2018, it relies heavily on trade with China. Bilateral trade is predicted to reach $100 billion, according to Vietnamese state media. Last year it had a $22.76 billion trade deficit with China, one that the TPP would have helped offset. Yet after thousands of years of subjugation, a virulent Sinophobia grips most of Vietnamese society. The two nations last fought a border war in 1979. Animosity has swelled alongside China’s growing assertiveness, especially over competing claims in the South China Sea.

With that in mind, whether Washington can recruit Hanoi to its cause is a bellwether for other countries in the region seeking to balance China’s rise by reinforcing ties with the world’s pre-eminent superpower.

Back in 2016, former U.S. President Barack Obama achieved a public relations coup when he sat down at a humble Hanoi restaurant with late celebrity chef Anthony Bourdain for bun cha, a fragrant noodle dish of grilled pork belly. Today the backroom table where they ate is enshrined in a glass cube, and “Combo Obama”—including a Hanoi beer—is the top choice on the menu.

The paradox of Vietnam is that its leaders see Beijing’s authoritarianism as a governance model to replicate while its people remain pathologically wary of China’s ambitions, preferring better relations with the West. Obama’s visit and lifting of a ban on selling American weaponry to Hanoi in May 2016 helped boost rapprochement between the former foes. On March 5, Vietnam welcomed the first U.S. aircraft carrier, the U.S.S. Carl Vinson, to dock since the end of the Vietnam War. Washington is also spending hundreds of millions of dollars on cleanup programs for contamination caused by Agent Orange.

Vietnam is also rebranding itself as a Western-friendly tech hub. At a co-working space in central Hanoi, dozens of tech and media workers hammer at laptops, flanked by dwarf papaya and French windows. Here, in what some call the “Silicon Valley of Southeast Asia,” programmers can be hired for a fifth of the cost of the U.S. or Singapore. According to government figures, the country attracted $35.88 billion in foreign direct investment capital last year, up 44% from 2016.

This outside investment is at risk, however, as a new cybersecurity law next year will tighten control of tech companies, requiring firms like Facebook and Google to store customers’ personal data locally, sparking privacy concerns. It mirrors a law already introduced in China, showing that Vietnamese policymakers are often happy to follow Beijing’s authoritarian path. Trong in particular values better ties with China. He has sent young cadres to China for exchange programs, and has emulated Xi by pursuing a sweeping anti-corruption campaign, which has netted top figures from business, the military and within the Communist Party.

Vietnam’s human-rights record also echoes China’s approach to dissent. According to Human Rights Watch, Vietnam was jailing at least 119 prisoners of conscience as of January. In October, dissident blogger Nguyen Ngoc Nhu Quynh, known as Mother Mushroom, was forced into exile in the U.S. after being incarcerated for two years.“How can I think the new President will give us more freedom?” asks dissident singer Mai Khoi, who has been harassed and evicted because of her antigovernment lyrics. “If we get more freedom, it’s only because we fight for it.”

Yet the issue that seems to bring people onto the street is still perceived encroachment on sovereignty by China. William Nguyen, 33, a Yale graduate from Texas, was arrested June 10 in Ho Chi Minh City at a protest against 99-year leases in special economic zones likely to be dominated by Chinese firms. For five weeks, he was held in the infamous Chi Hoa Prison, consisting of eight cellblocks circling a central courtyard with a single 20-m-high watchtower. “It was a seven-hour rotation of angry men screaming,” Nguyen tells TIME of his initial two-day interrogation, arms and feet shackled to a metal bar, during which he was allowed up only for toilet breaks and meals.

Vietnam has never rolled over when its sovereignty has been challenged. It has been particularly outspoken when it comes to Beijing’s militarization of rocks and reefs in the strategic South China Sea, through which passes almost a third of all maritime trade. Violent demonstrations swept Vietnam in 2014 following China’s deployment of an oil rig in the disputed waters, with at least 21 deaths as some 100,000 protesters targeted Chinese-owned businesses. These disputed waters are an area where Hanoi’s priority aligns clearly with Washington’s. “We remain highly concerned with continued militarization of features in the South China Sea,” Mattis told reporters on his flight to Ho Chi Minh City.

Elsewhere in Vietnam’s foreign policy, however, there are hurdles to rapprochement with the U.S. Vietnam is governed by the “three no’s” policy: no military alliances, no foreign bases in Vietnam and no reliance on another country for its defense. It has also mainly purchased Russian arms since the Cold War and in September placed a $1 billion order for assorted weaponry.

This puts Vietnam in contravention of the 2017 Countering America’s Adversaries Through Sanctions Act, which is aimed chiefly at penalizing the Kremlin over the Ukraine and Syria conflicts and the 2016 U.S. election. But in line with its growing strategic importance, Hanoi was granted a waiver (as were other U.S.-friendly nations, like Indonesia and India). Still, Vietnam nixed joint exercises between its navy and the U.S. Marine Corps, ostensibly in reaction to Washington’s criticism of the deal.

“Vietnam welcomes the U.S. taking a stronger line with China but can’t stand shoulder to shoulder with us,” says a senior U.S. diplomat, speaking to TIME on condition of anonymity. “Vietnam can never be an American ally.”

That doesn’t resonate with gallery owner Duk, who only sees young Vietnamese who loathe China and want to study in the West. “Only foreigners buy these posters now,” he says with a shrug. “Not even old people want to remember this history.” But for the Communist Party, the key strategy articulated in the posters remains constant: self-reliance, keeping both friend and foe at arm’s length. That is unlikely to change under Trong. The system stays in place even as its art fades away. 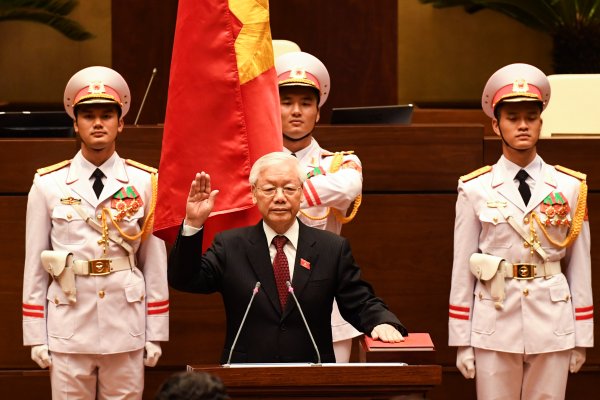