How to Sound Smart About the End of Angela Merkel's Reign

German Chancellor Angela Merkel looks on during a press conference at the CDU headquarters on Oct. 29, 2018 one day after the regional state elections in Hesse
Markus Heine—AFP/Getty Images
By Ian Bremmer

The countdown clock on the Merkel era has officially begun. Here’s how to sound smart about it:

Germany held state elections in Hesse last weekend, resulting in the latest drubbing of German establishment parties. Both the center-right CDU and the center-left SPD saw their vote shares drop by double digits. On the back of the vote, German Chancellor Angela Merkel announced she won’t run for the CDU’s party leadership in 2019 and that she intends to step down as Chancellor in 2021, after sixteen years in power.

Whatever you may think of her politics, there is no arguing that Merkel has been the single most critical (and powerful) European leader for the last decade, an unyielding force for pro-integration across the bloc that has kept European countries on the “periphery” lashed together with “core” Europe. With her departure, the two-track nature of the European Union becomes ever clearer.

The EU needs a strong leader in Berlin setting the agenda. But Merkel’s declaration effectively makes her a lame-duck at a time when anti-E.U. forces are ascendant across the European continent. Given its built-in structural advantages, Germany will be just fine without Merkel; Europe is the one that we need to be worried about.

Merkel has always been a deft politician, one who understands political power dynamics better than almost anyone else playing the game today. Even given all that, it’s much more likely Merkel leaves office closer to 2019 than 2021. The CDU’s leadership contest has already begun, and whoever wins it is the odds-on favorite to be Germany’s next chancellor.

General Secretary Annegret Kramp-Karrenbauer is Merkel’s preferred successor, former MP and MEP Friedrich Merz has spent the last 10 years in the private sector, and Health Minister Jens Spahn is a frequent Merkel critic—all three have announced plans to run. Spahn’s calling card will be a tougher migration policy, Merz will frame himself as the business-friendly candidate, and Kramp-Karrenbauer will position herself as a natural continuation of Merkel. That may be enough of a distinction within the CDU, but not within the broader context of German politics. Which means that despite the new face, the CDU will have the same old problems.

Meanwhile the CDU’s junior coalition partner (the SPD) will be watching the leadership race closely. If the CDU tacks right in their leadership selection to stave off the rise of the far-right Alternative fur Deutschland (AfD), it imperils the current grand coalition and may even trigger early elections. Expect the SPD — which suffered its worst performance in the last election since World War II — to grow more aggressive over Merkel’s remaining term as it tries to gin up some much-needed policy wins for itself.

80 — the percentage of respondents in a June 2018 survey who said they were “somewhat, or completely, dissatisfied” with Merkel’s CSU-led coalition. Only one in five said they were happy with Germany’s leadership.

The One Thing You Should Read About It:

“The Quiet German: The Astonishing Rise of Angela Merkel, the Most Powerful Woman in the World” by George Packer. One of the all-time great New Yorker profiles that should not be missed, even if Merkel is on her way out.

Whoever replaces Merkel will likely not be the same champion of the EU that she was. That means the nationalists have just notched up their most high-profile international victory to date, by effectively sidelining a politician often described as the “leader of the free world” — and who happens to be Donald Trump’s least favorite European leader.

That Merkel leaving means the “end of Europe.” No other countries are looking to leave a la Brexit; this is just one more crisis Brussels will have to deal with. At least Brussels has plenty of experience dealing with those lately. 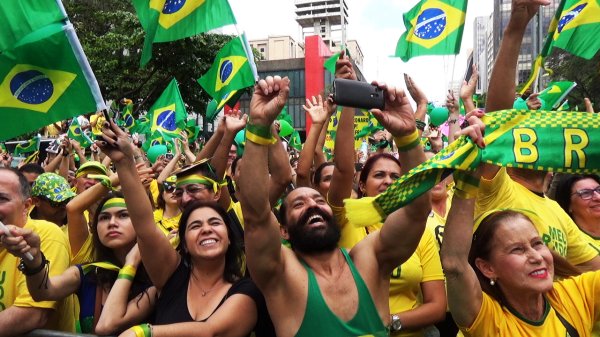 How to Sound Smart About... Brazil's Presidential Election
Next Up: Editor's Pick