What made Freddie Mercury such a captivating public figure is the same thing that makes him such a difficult subject to capture fully on film: his multitudes. Examine his sexuality alone and you have contractions twisting and knotting within one rather petite man. He never formally came out, yet his queerness was imprinted on the very band he fronted and named, Queen. He is said to have had an insatiable appetite for sex with men, yet his most enduring relationship seems to have been with a woman to whom he was once engaged (and who inherited the majority of his fortune when he died of AIDS in 1991), Mary Austen. He fluidly presented along the femme-butch spectrum, equally convincing in glam drag, in drag drag, and in the cartoonishly masculine “Castro clone” uniform (tight jeans, tank top, an imposing mustache, muscles) that originated in San Francisco in the early ’70s.

Compressing this one aspect of Mercury’s life into the Hollywood biopic template would be a difficult task in itself. Anthony McCarten’s screenplay for director Bryan Singer’s new movie Bohemian Rhapsody, though, attempts to do that and then some as a rock musical that spans the early ’70s origins of Queen through the band’s triumphant turn at the 1985 charity concert Live Aid. Complicating matters further is the tameness imposed upon this movie, which was either devised with its eventual PG-13 rating in mind (which is somewhat baffling, considering that today’s tweens were decades from being born during the band’s heyday) or has been edited to secure the rating. By all accounts, Mercury (and his bandmates) did not live a PG-13 lifestyle.

What we are presented in Bohemian Rhapsody then is, in fact, a little silhouette of a man. The questions that open Queen’s signature song, for which this movie was named—the mad-scientist-esque creation of which provides a thoroughly exhilarating extended sequence in the film—haunt the movie throughout: Is this the real life? Is this just fantasy?

Probably more the latter than the former, although the depiction of Mercury’s gay life isn’t the disaster some internet thinkers predicted earlier this year when the film’s first trailer left out Mercury’s battle with the disease to which he would succumb. His AIDS is in there, albeit via inventive tinkering: Bohemian Rhapsody portrays his diagnosis as occurring in 1985, in the days leading up to Live Aid, though Mercury reportedly was actually diagnosed in 1987. In an attempt to cover all the bases, Bohemian Rhapsody sometimes drops the ball.

And yet, there is the distinct feeling that you are watching LGBTQ history here and for underfed queer audiences, that alone may be moving. This is a movie that will, at the very least, make it impossible for its viewers to conveniently ignore the real, queer life behind “We Will Rock You” as it blares on the speakers in sports arenas. Mercury cruises a beefy dad at a truck stop during the band’s first American tour. Later, as “Another One Bites the Dust” resonates in all of its 1980 disco-fondling glory, Mercury visits a gay bar that’s probably supposed to represent the Mineshaft with its red lighting and leather-clad hunks. (Mercury’s time at the spot, which was eventually shuttered in 1985 in New York City’s feeble response to the mounting AIDS crisis, was reportedly transformative.)

Are you hanging on the edge of your seat? Well, get used to it. Whether Mercury is indulging or merely a looky-loo is never fully explored. Queer audiences know the answer, but straight viewers who still find gay sex icky are never forced to encounter it.

Bohemian Rhapsody doesn’t mince around Mercury’s identity any more than he did, but by focusing on the pain resulting from an intense hobby of casual anonymous sex (the loneliness, the life-threatening diseases) and not the pleasure, the depiction here is unfortunately warped.

Still, looking for nuance in this kind of big-budget biopic is like looking for love on Grindr; it happens, but rarely. Though its direction is credited to a gay man—Singer, who was fired and replaced by Dexter Fletcher during filming—this movie was made to speak to the masses. Its attempt to make Mercury’s story universal isn’t entirely unreasonable, either: He was, after all, a superstar. We’re given enough to piece together how the otherness he felt as a queer and Parsi man positioned him as a champion for outcasts. Bohemian Rhapsody dazzles most consistently during its musical numbers, in which Malek channels the real Mercury with drool-inducing accuracy. Mercury’s charisma was a force of nature, his appeal so widespread as to be an objective truth. That the movie really sings when Mercury does makes Bohemian Rhapsody ultimately shallow but that’s exactly the point. A pivotal scene features Malek’s Mercury explaining to Mary (Lucy Boynton) that onstage, “I’m exactly the person I was always meant to be.” 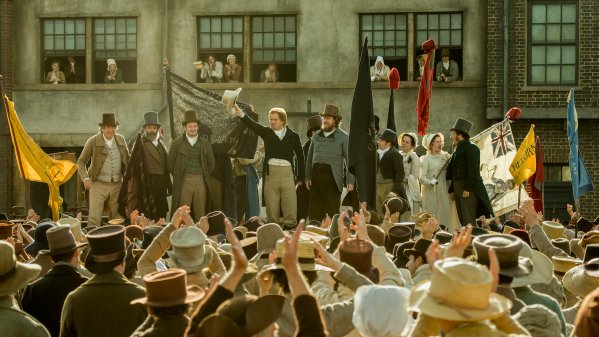 The Movie 'Peterloo' Is Based on a Real Massacre. Here's What to Know About the True Story
Next Up: Editor's Pick