A little girl wearing a Halloween costume where she appeared to be carrying her own head has captured the hearts of the Internet, thanks to the sweet and spooky spectacle.

In a now-viral Facebook video posted by her mother Krystel Hwang, 2-year-old Maya is seen running around a playground in Manila’s Parañaque City, attired in a floral dress while seemingly carrying her own head on a platter.

In an interview with Coconuts Manila, Hwang said that she made the costume herself, along with input from her kids, and that it was constructed out of “materials you can find at home.” While little Maya’s creepy costume might have scared a few observers, Hwang said that because she involves her daughters in creating the costumes, there’s no fear in their household.

“They’re not scared because we made the costume together and my kids have watched Halloween makeup tutorials on YouTube and so they know it’s fake and it’s all makeup,” she said.

See Maya strut her stuff in her scene-stealing costume below. 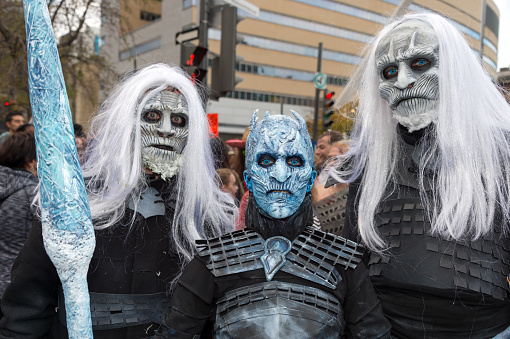 These Are the Game of Thrones Halloween Costumes That Should Rule the Realm
Next Up: Editor's Pick