Apple unveiled a host of new products and gadgets during a Tuesday event in Brooklyn, New York. The event came just weeks after Apple announced its latest iPhone models, including the iPhone XS, iPhone XS Max, and iPhone XR.

Here’s a closer look at the Cupertino, Calif. company’s latest offerings, including a new MacBook Air with Retina display, a revamped Mac Mini, and an upgraded pair of iPad Pro tablets:

After years of going without a major update, the MacBook Air got a refreshed 13.3-inch design complete with high-res Retina display. The borders around the screen are 50% thinner, Apple says.

The MacBook Air also has Touch ID, Apple’s fingerprint-scanning unlocking-and-Apple-Paying mechanism. Unlike on the MacBook Pro Touch Bar models, the new MacBook Air’s fingerprint sensor is located in the lower right-hand corner of the keyboard. The MacBook Air appears to have the same keyboard as the latest MacBook Pro models, which is controversial with some users but preferred by others. A new Force Touch trackpad is 20% larger than on the previous Air.

Port-wise, the new MacBook Air has only two Thunderbolt 3 / USB-C ports, meaning you’ll need an adapter for everything from HDMI to SD cards and beyond.

The new MacBook Air is packing an 8th generation Intel dual-core CPU, with up to 16GB of RAM and up to 1.5TB of SSD storage. Meanwhile, the physical design is 17% less volume than the last MacBook Air, Apple says — and with a chassis made from 100% recycled aluminum.

Overall, Apple’s new MacBook Air looks like a slimmed-down version of its non-Touch Bar MacBook Pro. It also appears to be more versatile than Apple’s 12-inch MacBook, leaving that device as a question mark in Apple’s laptop lineup.

Speaking of Macs badly in need of an update, Apple refreshed the diminutive Mac Mini, which hasn’t gotten a notable upgrade since 2014.

The new Mac Mini comes in 4- and 6-core options, making it up to five times faster than the previous model, Apple says. It’ll have up to 2TB of SSD storage. It’ll have four Thunderbolt 3 / USB-C ports, two USB-A ports, and one HDMI and one ethernet.

The new Mac Mini starts at $799. It’ll be available Nov. 7. Like the new MacBook Air, the body is made from 100% recycled aluminum.

Moving from Macs to tablets, Apple introduced a new iPad Pro. It’s got a “Liquid Retina” display that stretches farther to the sides of the device. It’ll be available in 11-inch and 12.9-inch options, with the latter measuring in at 25% thinner, Apple says — the bigger option is also notably physically smaller than the previous larger iPad Pro option, too, with Apple stuffing more screen space into the available real estate.

Both models are equipped with Apple’s A12X Bionic chip, an upgrade from the processors inside the latest, A12-powered iPhones.

The new iPad Pro will have up to 1TB of storage, and has a USB-C port. That port supports “charging out,” meaning you can use the new iPad Pro to charge an iPhone or other device.

A new Apple Pencil connects magnetically to the iPad Pro and charges wirelessly while attached. There’s a redesigned Smart Folio Keyboard as well. 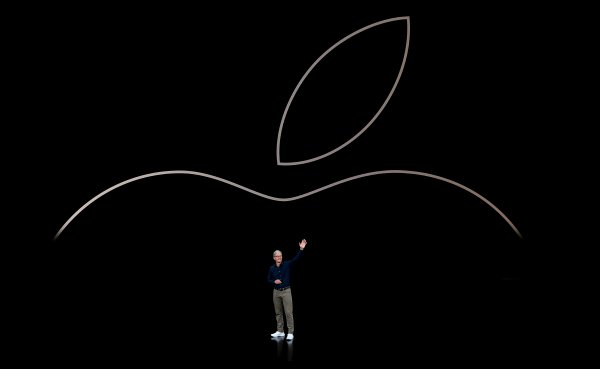 How to Watch Apple's Big iPad and Mac Event Today
Next Up: Editor's Pick