Pharrell Williams is demanding that President Donald Trump stop playing his song “Happy” following its use at a rally on Saturday hours after a mass shooting at Pittsburgh Synagogue left 11 peopled dead.

“Pharrell has not, and will not, grant you permission to publicly perform or otherwise broadcast or disseminate any of his music,” the singer’s lawyer, Howard King, wrote in a cease and desist letter sent to Trump on Monday.

“On the day of the mass murder of 11 human beings at the hands of a deranged ‘nationalist’, you played his song Happy to a crowd at a political event in Indiana,” the letter reads. “There was nothing ‘happy’ about the tragedy inflicted upon our country on Saturday and no permission was granted for your use of this song for this purpose.”

Trump defended his decision to go ahead with Saturday’s rally, arguing that allowing the synagogue attack to “change all our lives” would be a victory for the gunman.

Pharrell is not the first artist to oppose Trump’s use of their music at his events. In August, Aerosmith frontman Steven Tyler sent the President a cease and desist letter ordering him to stop playing the band’s song “Livin’ on the Edge”, saying it was “falsely implying that our client … endorses his campaign and/or his presidency.”

Adele, the Rolling Stones and Queen have also demanded Trump keep their songs out of his rallies. 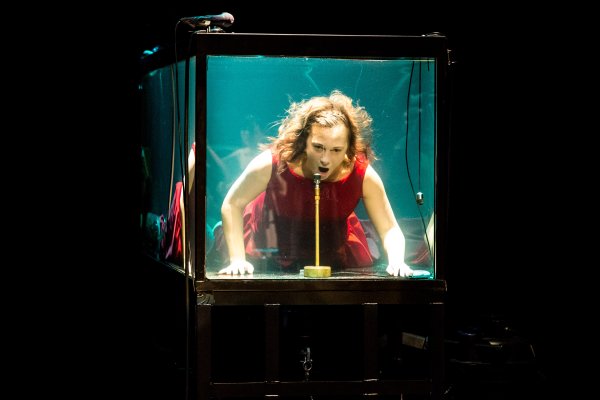 Underwater Concert 'AquaSonic' Is Eerily Spectacular
Next Up: Editor's Pick