On Oct. 24 in a New York courtroom, two kingpins of Kenya’s illegal wildlife trade pleaded guilty to crimes that carry a maximum sentence of life imprisonment. Baktash and Ibrahim Akasha had been connected to seizures of over 30 metric tons of illegal ivory in Mombasa.

The illegal wildlife trade is worth as much as $23 billion each year, and has led to the deaths of 7,000 rhinos and 200,000 elephants over the last decade. The guilty pleas of the Akasha brothers, however, had nothing to do with their role in the trade. Instead, they were in court on charges of conspiring to traffic massive quantities of heroin and methamphetamine into the U.S., as well as bribing officials, and possessing heavy weaponry.

Although not convicted or even charged for the ivory trafficking that made them infamous in conservationist circles, the guilty pleas of the Akashas were welcomed among environmentalists as a rare bit of good news. On Monday, China announced it would revoke its longstanding ban on the trade of rhino and tiger parts, threatening to further fuel demand for poaching. (Earlier this year, in March, the world’s last male northern white rhino died, effectively bringing the subspecies to extinction.) And on Tuesday, a major study commissioned by the WWF showed that humans have wiped out 60% of the world’s mammals, birds, fish and reptiles since 1970, a level of annihilation scientists are beginning to call Earth’s sixth mass extinction—comparable to the asteroid that wiped out the dinosaurs.

Back in New York, the case of the Akashas illustrates the overlap between the ivory trade and criminal groups involved in illegal drugs, weapons and even terrorism. Groups like Al Shabaab and the Lord’s Resistance Army (militant groups in Central and Eastern Africa) partially fund their operations through poaching, according to environmentalists—although by precisely how much is up for debate. “The criminal networks moving these illicit commodities do business with terrorist, rebel and extremist groups,” says Kate Brooks, a photojournalist and the director of a new documentary film, The Last Animals, a trailer for which exclusively premieres on Tuesday in partnership with TIME. (Watch above.)

The Last Animals, which will release in the U.S. in spring 2019, follows the activists battling for the fortunes of the last elephants and rhinos on the planet. From a squad of park rangers risking their lives to protect elephants in the Democratic Republic of Congo (DRC), to conservationists linking DNA from animal dung to ivory seized in raids of organized criminal shipments, the documentary paints a picture of a noble but ultimately losing battle to end poaching and stop the eradication of the world’s dwindling populations of elephants and rhinos.

“Governments are increasingly acknowledging that there is a convergence between the criminal networks involved in wildlife trafficking, human trafficking, and drugs and weapons smuggling,” Brooks tells TIME. The problem is that for every step forward, there’s a step back elsewhere. On Oct. 26, U.S. Attorney General Jeff Sessions told a forum on the illegal wildlife trade in Washington, D.C. that the U.S. “views the poaching and trafficking of protected wildlife as a threat to good governance, a threat to the rule of law, and a challenge to our stewardship responsibilities to this good earth,” and would take renewed steps to combat the problem overseas. Three days later, China reversed its ban on rhino horn and tiger bones, citing potential uses in “medical research or in healing.”

On the ground, that back and forth can seem very far away. In one scene in The Last Animals, the park rangers in the DRC capture three wounded poachers. Bundled into a helicopter, the bleeding men appear vulnerable and empty-handed. We later learn one dies, and see his body lowered into a rudimentary grave. “The poachers themselves are disposable foot soldiers. It’s hard not to feel compassion for them too, knowing they are being exploited,” says Brooks, who as a photojournalist has reported from war zones for international media, including from Afghanistan for TIME. “But they are going armed into protected spaces and killing people, as well as animals.”

For the most part, multifaceted criminals like the Akashas are really driving the trade. “I see poaching as primarily an issue of organized crime,” says Brooks. The U.S. government agrees. In total, 17 government departments and agencies are working on combating trafficking. The Department of Homeland Security has its own special agent, John Brown, stationed in Nairobi to combat not just poaching but the trade in all illegal goods derived from animals. “The Akasha brothers were a criminal element that were willing to get into anything they could make money off of,” he tells TIME. But, he says, the links between drugs and the illegal wildlife trade can sometimes be overblown. “I think the wildlife traffickers are making enough money on the wildlife trade with little exposure to prosecution,” he says. “Why would they risk co-mingling with drug traffickers?”

That question will have prickly repercussions for the U.S. Department of Justice if it hopes that drug trafficking charges, with their long prison sentences, can be reliably used to put wildlife traffickers in the dock. Undercover in Southeast Asia, Brooks picks up a bracelet made of rhino horn that costs $4,800. That’s “more than the street value of cocaine,” she says. When the rewards are that high, the risks of drug trafficking begin to look out of step with the rewards.

With a minimum sentence of 10 years for their crimes, the Akashas’ time heading up the Mombasa criminal underworld appears to be over. But Gretchen Peters, the Executive Director of the Center on Illicit Networks and Transnational Organized Crime, who worked on the Akasha case, says that alone won’t end the ivory trade. “There are still members of this network out there,” she says. “They are literally right now trying to reconstitute themselves, and it’s important that authorities don’t lose focus of the wider network. Just plucking two guys out of Kenya is not going to be the end of the story.”

Brooks hopes that The Last Animals can help tell that unfinished story. In October, the film won the “impact award” at Wildscreen, the world’s leading natural film festival. It beat to the prize the BBC’s Blue Planet II, which was widely celebrated for increasing awareness of humanity’s impact on the oceans. Brooks says her greatest hopes are that the film will raise awareness of the plight elephants and rhinos face, make people think twice about buying ivory, and force governments to act faster to outlaw the illegal wildlife trade around the world. On those lofty goals, the clock is ticking.

The film is released in the U.S. in spring 2019, and is available in the U.K., Canada and Australia on all major video on demand platforms from Nov. 5, 2018. 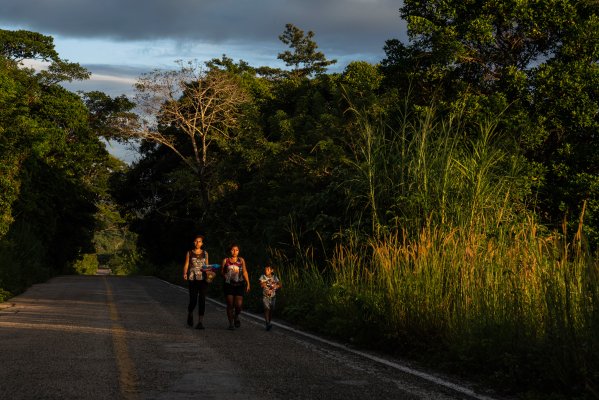 Caravans Help Migrants Travel Safely. But Recent Attention from Trump Might Change That
Next Up: Editor's Pick