How Big a Role Does Social Media Play in Homegrown Terrorism?

A man takes a moment at each of the Star of David memorials with the names of the 11 people who were killed at the Tree of Life synagogue two days after a mass shooting in Pittsburgh, Pennsylvania, on Oct. 29, 2018.
JARED WICKERHAM—EPA-EFE/REX/Shutterstock
By W.J. Hennigan

In the 17 years since the 9/11 attacks, America’s tendency has been to look outside of its borders for the looming threat of violent extremism. Yet a sense of guilty introspection swept over the country when it was discovered that enemies from within had carried out two hate-fueled plots in the span of less than a week.

The deadly rampage on a synagogue in Pittsburgh, Pa., and the letter bombing campaign that targeted prominent Democrats cast a spotlight on the vicious political environment, the mounting threat posed by homegrown terrorism and the rise of far-right extremism in the social media age.

As details about the suspects, Robert Bowers and Cesar Sayoc, came into public view, the similarities were difficult to ignore. Both were single, middle-aged, working-class men without social standing. Both were driven by political motivations to carry out their plots. And both sought out — and disseminated — spurious hate-tinged information on social media websites.

While neither Sayoc, nor Bowers, has been officially linked with any particular right-wing extremist organizations, both seized upon talking points espoused by such groups which is defined by online trolls, racist activists and hate-filled misogynists. Such connections may come to light in the days and weeks to come, as more is learned about these men and their involvement online.

Neo-Nazis, white supremacists, anti-government militants, and other like-minded organizations have long been a source of anxiety to terrorism analysts who have watched the groups step up violence inside United States in recent years. The Anti-Defamation League, the left-leaning nonprofit that tracks anti-Semitism, found in its annual report that the number of murders conducted by white supremacists in the U.S. more than doubled last year to 20 people, compared to 2016. The report documented how right-wing extremist sentiments shared online often spill into real world, including the march on Charlottesville, Va., which resulted in the vehicle ramming attack that killed 32-year-old Heather Heyer.

Since the 9/11 terrorist attacks, far-right extremists were responsible for almost three times as many attacks as Islamist extremists: 62, as compared to 23, according to a 2017 Government Accountability Office report. Over that time, the report said far-right attacks killed 106 people in the United States, while Islamist-inspired extremists killed 119.

Around the world, the number of terrorist attacks dropped last year, according to the University of Maryland’s Global Terrorism Database. However, terrorism in the United States is on the rise. The reason, at least in part, is due to the spate of attacks motivated by far-right extremists.

“The data suggests we’re potentially seeing a new wave of violence by these groups,” said Seth Jones, a former U.S. counter-terrorism official now with Center for Strategic and International Studies, a Washington think tank. “After years of focusing on the international violent extremism, we’re starting to see an increase in resources on the threat here at home.”

The Trump Administration acknowledged “domestic terrorism in the United States is on the rise” in its new “National Strategy for Counterterrorism” that was published earlier this month. The 34-page document said there was “a persistent security threat from domestic terrorists who are not motivated by a radical Islamist ideology but are instead motivated by other forms of violent extremism, such as racially motivated extremism, animal rights extremism, environmental extremism, sovereign citizen extremism, and militia extremism.”

A large part of combating the threat hinges on stopping the spread of terrorist ideology online, the document said.

Since the dawn of the Internet, hate-seekers have been able to find chat rooms or websites in the dark corners of the Web. But the emergence of social media sites, such as Facebook, YouTube and Twitter, has since made hate speech and misinformation far more accessible to anyone with a smart device. The troubling question in the wake of this last surge of violence is whether social media makes attacks by extremists more likely.

“Social media has connected those who would otherwise be unable to connect, been used to inspire those who would otherwise not be reached, driven viral ideas that would previously have been limited to the margins, and mainstreamed political leaders who have given legitimacy to the conspiracy theories and hate that extremist groups and individuals thrive on,” said Peter W. Singer, author of “Like War,” a book on the weaponization of social media.

As more misinformation pinballs around the internet, experts in terrorism and information warfare point out that a deadly pattern has emerged.

While the world’s attention was on the letter bomb threats last week, another attack occurred. Gregory Bush, a 69-year old white man who also shared racist imagery through social media, shot and killed a black woman and man in a grocery store parking lot in Louisville, Ky. Earlier he tried to break into a black Baptist church, but failed. Federal investigators are examining whether the attacks can be classified as “hate crimes.”

The FBI recently reported that hate crimes reached their highest mark since 2012. The bureau recorded 6,121 criminal incidents in 2016 motivated by bias against race, religion, sexual orientation, disability or gender, according to the most recent data. Most incidents were motivated by race or ethnicity, the FBI said.

Earlier this month, FBI Director Christopher A. Wray told a Senate committee that the bureau was investigating 5,000 terrorism cases in every U.S. state. About 1,000 of those cases involved domestic terrorism, a category that includes both far-right and far-left extremists. “We have assessed that that’s a steady, very serious threat,” Wray said, adding: “It’s something we take very seriously.”

Sayoc, who is suspected of mailing 14 pipe bombs to Democrats and critics of President Donald Trump, posted right-wing conspiracy theories on Facebook and Twitter. He was Facebook friends with an account called “Killgeorge Soros,” a reference to the liberal billionaire who was sent one of the packages.

Bowers, who stands accused of killing 11 people inside a synagogue, also spread misinformation on a social media site called Gab, which has become a haven for right-wing extremists as an alternative to the more restrictive Twitter.

Two hours before the attack, Bowers took to Gab to lambast HIAS, a Jewish-American organization that helps international refugees resettle in the United States and elsewhere. He wrote: “HIAS likes to bring invaders that kill our people. I can’t sit by and watch my people get slaughtered. Screw your optics. I’m going in.”

Free speech advocates and some who work at social media platforms say trying to suppress hate speech is more dangerous than allowing it to be aired and defeated.

Gab was established two years ago after Facebook and Twitter were pressured by the federal government to be more proactive in policing racist and anti-Semitic posts. Gab’s commitment to unfettered “free speech” has made it popular with many fringe right-wing groups, including the so-called alt-right.

“We’re very worried about people’s rights,” Utsav Sanduja, Gab’s then-Chief Operating Officer, told Vice earlier this year. “A lot of political speech is being labelled as hate speech and is simply being wiped off the map.”

The former employee told TIME he thought it was important for sites like Gab to exist.

“Frankly, I would rather have that sort of content above ground as opposed to being underground,” Sanduja said. “When you censor people and deprive their rights to speak freely, unfortunately, some of them go criminal, and they go underground.”

Gab was temporarily shut down after GoDaddy, the site’s webservice provider, pulled its support Sunday night following the synagogue attack. The next day, Gab issued a statement promising users the site would return. 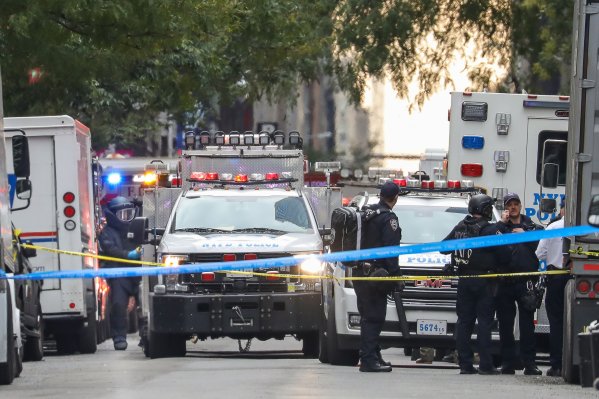 Mail Bombs Rocked American Politics a Century Ago. Here's What a Historian Thinks That Moment Has to Teach Us
Next Up: Editor's Pick