NATO Is in the Middle of an Expensive and Dangerous Military Exercise. Here’s Why Those War Games Are Worth It

A British Army Brigade Commander disembarks from a United States Army Chinook CH-47 helicopter during a reconnaissance mission ahead of live exercise, on Oct. 27, 2018 in Alvdal, Norway. Over 40,000 participants from 31 nations will take part in the NATO "Trident Juncture" exercise, the largest exercise of it's kind to be held in Norway since the 1980s.
Leon Neal—Getty Images
Ideas
By James Stavridis
Admiral Stavridis (Ret.), a TIME Contributing Editor, was the 16th Supreme Allied Commander at NATO and is Vice Chair, Global Affairs at The Carlyle Group and Chair of the Board of the Rockefeller Foundation. He is the co-author of 2034: A Novel of the Next World War. His most recent nonfiction book is "The Sailor's Bookshelf: 50 Books to Know the Sea."

I was in Naples, Italy, recently and spent time with the Commander of NATO’s Joint Force Command, Admiral Jamie Foggo. A tall, forceful nuclear submarine commander, he is currently deployed to Norway, leading the largest military exercises in the Alliance’s post-Cold War history. Over 50,000 troops, hundreds of aircraft and dozens of warships under his command are spread out around northern Europe as part of Exercise Trident Juncture.

In addition to the 29 NATO countries, both Sweden and Finland will have significant roles. And, another non-NATO nation has a role too: while the adversary in the exercise is “fictional,” it is clearly modeled on Russia.

The exercises run for two weeks, ending on Nov. 7, and are centered on defending NATO territory from a predatory invasion. Of note, there will be a U.S. Carrier Strike Group centered on the nuclear carrier U.S.S. Harry S. Truman operating in the harsh late-fall waters of the Greenland-Iceland-United Kingdom “gap,” the body of water that NATO would have to control to cut off Russian naval forces in the event of a war. It all has a very “Tom Clancy is back” feel to it.

I’ve been part of these exercises for decades, dating back to the height of the Cold War. The militaries on both sides take these events with the utmost seriousness — planes carry actual live ordnance, troops are dropped into icy waters to storm beaches, ships fire live missiles against maneuvering targets. As a commander, you sit in a darkened command center 24/7 watching blips on a radar screen representing enemy moves — it becomes very easy to fall into the rhythm of war. The costs are high and the risks are very real. And the chances for miscalculation by one side or the other, resulting in an incident that provokes a real escalation, is significant. Russia is already reacting badly, harshly criticizing the events, and insisting they will retaliate both with more exercises and newer weapons systems.

So why is NATO expending these resources and taking these risks?

First, and most obviously, these exercises are an opportunity for the NATO and partner militaries to simply practice the art of war. If we do end up in combat in Europe, our forces will have to be able to operate seamlessly together in demanding circumstances — to counter cyber attacks, high-tech weapons, internal geographic position and the advantage that a single-nation enemy would achieve from a unitary command structure. To overcome those obstacles will require not only brute force but also well-trained and coordinated units fighting effectively together. Practice makes if not perfect at least very good.

Second, the Alliance sees the war games as crucial to deter further aggressive behavior from Russia in the wake of the invasion of Ukraine, annexation of Crimea and ongoing cyber attacks. As Admiral Foggo and I sat overlooking the Bay of Naples in the run-up to the exercises, it was clear he saw these vast wargames as an appropriate response to an aggressive and resurgent Russian Federation. The Secretary General of NATO, former Norwegian Prime Minister Jens Stoltenberg, agrees. Both are quick to point out these exercises are defensive in nature, but — Admiral Foggo recently said — “if Russia challenges us, we will respond.” He is right to be concerned about Russian activity around the periphery of the Alliance, and it is not hard to hear the old ghosts of the Cold War rattling in the winds off the Baltic Sea.

Third, the exercises fall on the heels of a far larger Russian war game (albeit on its eastern border), with over 300,000 troops — six times larger than NATO’s current war game. Russia has also been conducting a series of offensively structure exercises around its periphery over the past six years. They have recently been operating warships and aircraft very aggressively, often penetrating Alliance airspace and confronting NATO warships at sea. All of this has rattled the NATO nations in the east, especially the vulnerable Baltics, and Trident Juncture is seen as a response to Russian military posturing.

Finally, the ongoing militarization of the vital Kaliningrad enclave in north central Europe is deeply worrisome to NATO. Perhaps the most strategic slice of territory in western Europe, Kaliningrad is a Russian Oblast (essentially a state of the Russian Federation) sandwiched between Poland and Lithuania on the Baltic Sea. Russia is improving airfields, constructing new ammunition bunkers, building nuclear weapons facilities and generally preparing to bring even more dangerous and destabilizing surface-to-surface cruise and ballistic missiles to the area. This is a violation of the Intermediate Nuclear Force Treaty, as Washington sees it, which has part of the reason why the U.S. in return has threatened to pull out of that arms-control agreement. A new arms race is about to unfold in Europe, much to the discomfort of our allies.

Taken together, these are sound reasons for NATO to (practice) going to war. But it is no one’s interest to stumble backwards into another full-blown Cold War. After Trident Juncture is done, NATO should take a deep breath and come up with a better strategy for dealing with Russia — something other than simply holding huge, expensive war games. Such events are necessary, but not sufficient.

We need a plan that includes pressuring Russia to comply with the INF treaty before it’s too late, maintenance of economic sanctions levied after the Ukraine invasion, a stronger counter-cyber capability for the Alliance, open military-to-military hotlines to reduce the chances of a miscalculation and a re-energized NATO-Russia Council to reduce tensions. All of this is frustrating and requires strategic patience; but it is better than watching war games turn into a real war. Having played the commander in many of these exercises, I can assure you a real conflict is only a flick of a switch away. 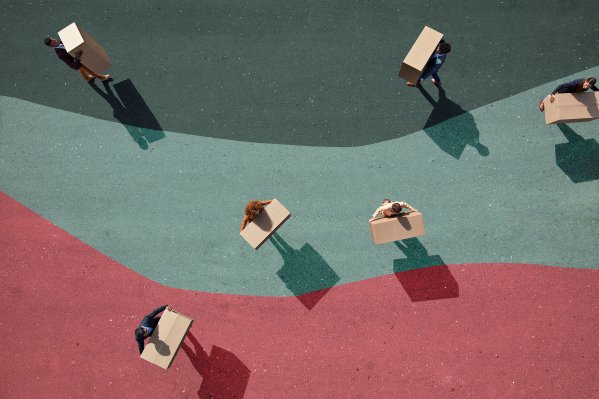 The Military Moves Hundreds of Thousands of Families Each Summer. Many of Them Don't Go Well
Next Up: Editor's Pick