A mural on Guns in America by artist JR and TIME is seen in Manhattan on October 28, 2018.
Andres Kudacki for TIME
By Abigail Abrams

When 11 people were killed at a Pittsburgh synagogue on Saturday in one of the deadliest attacks on Jews in U.S. history, people from all sides condemned the violence. Then the conversation quickly became familiar.

The alleged synagogue shooter carried an assault-style rifle and three pistols, authorities said. His ability to bring those weapons into the synagogue unchallenged once again elicited questions about who is allowed to own a gun in America. The President quickly injected the role of armed protection into the debate.

Different communities view these questions in vastly different ways, discussing them largely in echo chambers of those who share their geography, their political party, their newsfeed. This division is part of what TIME sought to address in its “Guns in America” project published just two days before the Pittsburgh shooting.

TIME partnered with the artist JR to ask 245 Americans about their experiences with guns and invited them to share their stories and perspectives on how to find common ground. The resulting mural composed of 245 portraits was pasted on the Bowery Wall in New York City on Friday, meant as a testament to the goals of hearing one another and searching for understanding. Over the weekend, the mural was spray painted with the number 11 in blood red — an apparent reference to the individuals murdered in Pittsburgh on Saturday. Flowers were also placed at the base of the mural, making it a makeshift memorial.

After the weekend’s events, we talked to two of the participants about how the “Guns in America” project informed their views and what they hope to see in the national gun conversation moving forward. Here is a conversation between Dianna Muller, a competitive shooter and former police officer from Tulsa, Okla. and Antong Lucky, a former gang member who now works to stop gun violence with Urban Specialists in Dallas. The interview has been edited for length.

Guns in America TIME cover
A TIME and JR Project

Q: Let’s start by talking about the tragic shooting in Pittsburgh on Saturday. What were each of your reactions when you heard about the shooting?

Dianna Muller: I felt like I just got kicked in the gut. Just thinking about empathizing with the victims and the families and the people who saw it and lived through it and the things they had to see. … It was gut wrenching.

And then on top of that, I know that as a gun owner that I am going to get attacked, that my gun rights are going to get attacked. My wish would have been that one, just one of them in that synagogue had been armed. Had there been one person that carried it could have most likely made such a difference and saved lives instead of losing so many at the hands of a mad man.

Antong Lucky: I think for me it’s a stronger call and a message in terms of sensible gun regulation. In terms of making sure that we’re doing background checks and that people who shouldn’t have them [guns] or have a track record of spewing hate or mental problems or what have you, don’t have access to weapons. I think when you call for evaluations of people who are purchasing guns, I think that’s sensible.

I do agree with Dianna that having someone armed could have changed that situation, but I also believe that we have to advocate for stronger sensible gun regulations and laws in terms of people who are able to purchase guns.

Q: We wanted to let you know that the Guns in America mural that JR put up in New York City was spray painted this weekend with “11” — the number of people killed in yesterday’s shooting.

Lucky: This project was meant to have a conversation where we’re not divided on the issues but where we’re finding common ground and willing to listen to another perspective other than our own. It really saddens me that someone mistook this project for their own personal or political reasons and not understanding that this project was meant to have a civil conversation and find some commonalities.

Muller: When we were putting that [mural] up, I was telling my nephew, I said ‘I wonder how long it’s going to take for this to get vandalized.’ From my perspective, this is the misperception that gun owners or NRA members are somehow responsible for the 11 lives lost on Saturday. I have the 180 degree view on that. That the people who are advocating no guns and not supporting your individual right to protect yourself —I feel like those are the people who are responsible for those 11 lives lost.

Q: Both of you came to this project to share your experiences with guns. But what were the most important things you came away from the project thinking about?

Muller: I did have an opportunity last night to listen to a handful of stories and the one that sticks out was Congressman Swalwell out of California. He started out by saying to listen to the kids and the kids’ rights were more important than constitutional rights. And my jaw dropped. I couldn’t believe he said that. I couldn’t believe this is a member of Congress that is basically dismissing our Constitution over children’s fears and — I don’t know, it’s just scary to think that we aren’t dealing with stronger leadership to explain to the kids, to nurture the kids, to help the kids along and understand. If we feel like there’s an issue with school shootings and there is, let’s prepare them. Let’s actually do something to make them safer.

(Note: Rep. Eric Swalwell, a Democrat from California, has proposed a ban on “military-style semiautomatic assault weapons” and said he would require owners of such firearms to sell them to the government or face prosecution. In response to Muller’s comments, Swalwell told TIME: “I think most parents in America, when they send their kids to school, want them to be able to learn without fear, come home after class, and believe that they should be able to live. We can do all of that and allow people to protect their homes, shoot for sport, and hunt with their families. They’re not mutually exclusive. But right now the response I saw suggests that we should just prepare kids that they could have their classes shot up but not do anything to prevent the most dangerous people from having the most dangerous weapons that would shoot up their classes. I believe, and most people in our communities believe, that a child’s right to learn, a child’s right to go home after class and their right to live is greater than any right in the Constitution and that right should come first.”)

Lucky: For me, going into this project, from Urban Specialists and the work we do to end gun violence in urban communities — one of the things going in is we were staunchly saying ban assault rifles and bump stocks and saying that strongly. … But after being involved in the project and being able to listen to both sides and after spending the day with Dianna and listening to her, I was able to change my perspective on that in terms of the ban. Because I do believe it’s our inalienable right to bear arms and protect ourselves. The project changed my mind because I don’t want to be misconstrued as saying our Second Amendment should be under attack.

Muller: I think we’re talking about the difference in my perspective between education versus legislation. I believe that educating is the right answer as opposed to legislating. Now you’ve said several times about wanting to remove firearms from people who shouldn’t have them. That is a task that probably will never — you know there are evil people. Like this guy [in Pittsburgh], I don’t think he’s mentally ill. I think that he hates. I think he’s sound in his mind. Just because you kill somebody doesn’t mean that you are mental. There are evil people among us, and those are the ones that I want to protect from.

Q: Antong was talking about needing background checks. Dianna, what are your thoughts on those?

Muller: There are two ways to look at this situation. There is to remove guns from the face of the earth and to think that would remove evil and violence, which I do not believe would be the case. Or there is the way to look at how you prepare yourself and how you protect yourself and how you protect your family. … So you either take guns away from the law abiding or you enhance the law abiding’s ability to protect themselves. And I want to enhance the law abiding’s ability to protect themselves through training, through education — not legislating and taking more guns away from the citizenry. … I don’t have confidence, based on the current laws that are in place that aren’t being enforced, I don’t have confidence that creating more legislation is going to make anybody any safer.

Q: It sounds like Antong has been shaped by your views, Dianna. Did you come away from this experience understanding his or other people who advocate for gun restrictions any differently?

Muller: I would love to tell you that I heard one of their stories and that it has changed my position, that I feel like there should be more gun control. But especially after the latest tragedy, the latest shooting, it has nothing but solidified my position that I want for more people to be armed. I want for American citizens to arm themselves and protect themselves. So I can’t say the same that the project has changed my heart or my mind in favor of gun control.

Q: So how do we talk to each other? Are there ways conversations like this can help?

Lucky: Yeah, I like to think the genius of the mural that TIME did and JR did, is that you get to press play and you get to listen to a perspective without being able to rebut. Without it being a debate. You have to listen to whatever the person that you click on says. My hope is that when people listen to it, it will make them say what I said: how do we address this complex issue in a sensible manner that respects the rights of everybody involved?

Muller: But I can’t make them listen. And it [the mural] was up for, what, 24 hours or less before it gets vandalized? There are people who I would say aren’t willing to listen and don’t want to hear.

Lucky: I think we have to focus on the ones that do and build upon those. 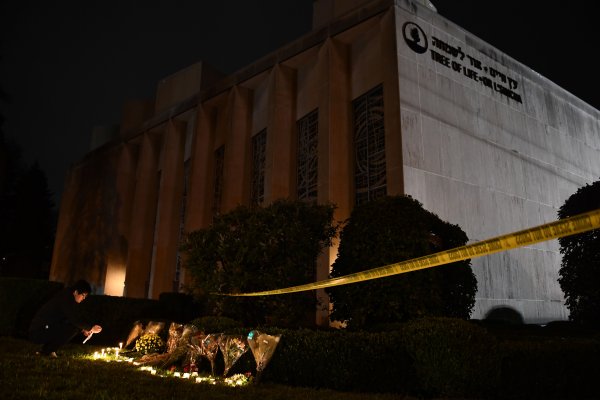 HIAS: An Explainer on the Synagogue Shooter's Social Media Target
Next Up: Editor's Pick