Young people who spend seven hours or more a day on screens are more than twice as likely to be diagnosed with depression or anxiety than those who use screens for an hour a day, finds a new study published in the journal Preventive Medicine Reports.

The data came from more than 40,000 kids ages two to 17 and was collected as part of the Census Bureau’s 2016 National Survey of Children’s Health. While spending seven or more hours a day on screens was not typical among the younger kids in the study, roughly 20% of 14- to 17-year-olds spent this amount of time on screens each day. (This dovetails with a recent Pew Research Center report that found teens use the Internet “almost constantly.” They’re likely following their parents’ lead: some estimates show that U.S. adults now spend roughly 10 hours a day staring at TVs or digital devices.)

Many of these same negative trends also turned up to a lesser degree among young people who used screens for four hours a day. Also, adolescents seemed to have more problems than younger kids as a result of heavy screen use.

“At first, I was surprised that the associations were larger for adolescents than for younger children,” says Jean Twenge, the study’s first author and a professor of psychology at San Diego State University. “However, teens spend more time on their phones and on social media, and we know from other research that these activities are more strongly linked to low wellbeing than watching TV and videos, which is most of younger children’s screen time.”

Twenge has spent the last few years examining the effects of digital technologies on the health and wellbeing of kids, many of which are documented in her book iGen. Some of her recent work has linked newer forms of media—particularly smartphones and social media—with sleep problems among adolescents. She’s also found that kids who spend more time on screens tend to be less happy than kids who engage in non-screen activities like playing sports, reading traditional printed media or spending time socializing with friends face-to-face.

Her work has contributed to growing concerns among some parents, teachers, guidance counselors and doctors that too much time spent on screens—especially on smartphones—may be linked to recent increases in teen depression and suicide.

Twenge says her study shows “a clear and strong association” between more screen time and lower wellbeing. “At the moment, the American Academy of Pediatrics guidelines set specific time limits on screen time only for children [ages] five and younger,” she says. “These findings and others suggest the AAP should consider extending these specific limits to older children and adolescents.” The AAP currently recommends that kids ages 2 to 5 use screens for no more than one hour a day, not including time spent video chatting with family or friends. But they do not recommend specific screen-time restrictions for older kids.

Not everyone agrees with the conclusions of Twenge’s new study. “The authors appear to have cherry picked outcome measures in terms of what results they could find that are statistically significant,” says Andrew Przybylski, an associate professor and director of research at the Oxford Internet Institute at the University of Oxford in the UK.

Last year, Przybylski published a study that examined an older (2011-2012) version of the same Census Bureau dataset that Twenge and her coauthor analyzed in their new paper. Based on the 2011-2012 data, Przybylski’s study concluded that the AAP’s advice to limit the screen time of young kids was not warranted.

“It is true that there is a very small and consistent correlation in many datasets between screen time and a range of outcomes,” he says. But the correlation some studies have found between increased screen time and outcomes like depression do not prove one is to blame for the other, he says. It may be that kids who are anxious or depressed are just more likely to spend a lot of time using screens. “For the research [in this] area to mature, people need to sort out these factors before making expansive claims,” he adds.

Other researchers not affiliated with Twenge’s new paper believe that the findings are important.

“This is a very impressive study,” says Dr. Brian Primack, a professor of medicine and pediatrics and director of the Center for Research on Media, Technology, and Health at the University of Pittsburgh. “This study goes beyond prior work in terms of giving a more fine-grained picture, which suggests that one hour of daily screen time may be an important threshold. It also provides relatively consistent patterns around multiple different concerning outcomes, such as depression, anxiety, problems completing tasks, and increased arguing.”

Primack says that no single study can provide “a complete picture” on the effects of screens on young people’s mental health, and that more research is needed. But when it comes to some screen-based activities—especially those related to social media and smartphones—parents have reason to be worried. “I would say that we now have enough evidence of concern that we should be exerting more caution than we are,” he says. 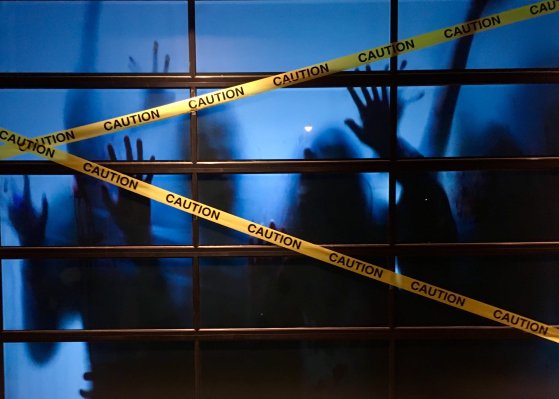 You Love Haunted Houses Because They’re Playing a Trick On Your Brain
Next Up: Editor's Pick