A Plane Carrying 189 People Crashed in Indonesia. Here's What We Know So Far

The plane that crashed into the sea with 189 people on board had experienced technical issues on four flights, Indonesian authorities said Monday. Investigators have been examining Lion Air flight JT610’s “black box” data recorder and other debris in a bid to determine why the plane went down over the Java Sea on October 29.

The incident has raised questions Lion Air’s safety regulations as well as the aircraft, a Boeing 737 MAX 8.

Here’s what we know about the incident.

What do we know about the crash?

Lion Air flight JT610 took off around 6:20 a.m. local time and was set to travel north from Jakarta to Pangkal Pinang, a city on the Indonesian island of Bangka. It crashed into the sea just 13 minutes after takeoff.

Shortly after takeoff, the pilot of flight JT610 requested permission from air traffic controllers to turn back to Jakarta’s Soekarno–Hatta International Airport. But the pilot did not indicate there was an emergency on board, an air traffic agency spokesman told CNN. However, pilots are trained to focus predominantly on flying their aircraft in emergency situations, with communication a secondary priority.

Data from the plane’s flight recorder, which was found Thursday, shows the plane had experienced problems with its air speed indicator on four flights, including the JT610.

Soerjanto Tjahjono, head of the National Transportation Safety Committee, said Monday that the small size and large quantity of debris found around the crash site indicated the plane had not exploded in mid-air and was still intact when it hit the water.

Bloomberg reported that according to data compiled by FlightRadar24, a flight-tracking system, the plane went down from 4,850 feet in altitude in just 21 seconds. The final data point obtained by FlightRadar24 showed the plane descending at 30,976 feet per minute, about 350 miles an hour — an almost unheard of speed for a descent.

“This thing really comes unglued. The numbers are barely believable,” John Cox, the president of the consulting company Safety Operating Systems and who has participated in numerous crash investigations, told Bloomberg.

The data also reportedly shows that the plane was rising and climbing in an unusual way and at various rates of speed before its final descent.

Cox cautions that the data should be approached carefully in the early stages of the investigation, but said it’s fairly clear the plane went down quickly and abruptly.

With 189 people on board, including passengers and crew, flight JT610 stands to become Indonesia’s worst aviation disaster since 1997. Indonesia’s finance ministry said 20 of the passengers on board were government officials.

What is Lion Air?

Lion Air is a low-cost air carrier based in Indonesia and established in 1999.

Concerns have previously been raised over Lion Air’s safety record. In 2004, 25 people died when a Lion Air plane crashed during a landing attempt in the city of Surakarta. In 2007, Lion Air was banned from flying in the European Union, along with all other Indonesian airlines, over a series of deadly accidents that followed a period of industry deregulation in the 1990’s. In 2013, 101 people survived a Lion Air crash in the sea off Bali and swam from the plane.

It was exempted from the EU ban in 2016 after new safety assessments were conducted.

What kind of plane was involved?

Flight JT610 appears to mark the first deadly incident involving a Boeing 737 MAX 8, a single-aisle commercial jet that came into service in 2017. Many aviation experts and airlines consider it the future of short-haul air travel, largely thanks to its fuel efficiency. 4,783 orders have been placed for the 737 MAX, with 219 delivered so far.

Lion Air was one of the Boeing 737 MAX 8’s best customers, with 11 in its fleet already. The specific plane that crashed Monday had been in use for just two months.

How is the search going?

Indonesia’s national search and rescue agency, Basarnas, is still combing through the waters of the Java sea where the plane went down. There are no survivors, and authorities have so far been unable to locate the plane’s cockpit voice recorder (CVR). Along with the flight data recorder, the CVR will be crucial to achieving a firm understanding of the flight’s final few minutes.

Locating the remains of victims and the CVR is Basarnas’ priority, the agency’s head Muhammad Syaugi told reporters Sunday.

The families of most of the victims are still waiting for their relatives to be identified, the Associated Press reports. Police medical examiners have only identified the remains contained in a tenth of the 140 body bags they have received.

Due to an editing error, the original version of this story misstated in one instance the type of plane involved in the Lion Air incident. It was a Boeing 737 MAX 8, not a Boeing 787. 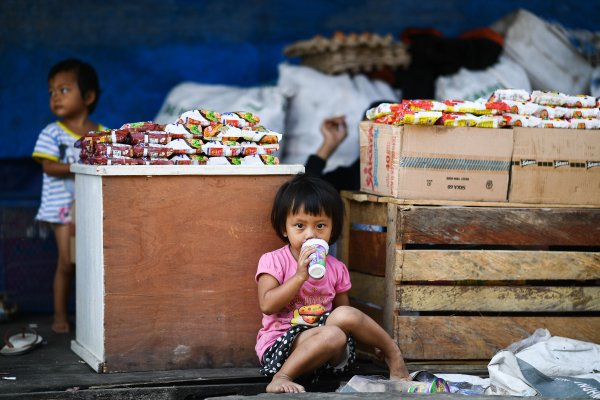 Children at Risk After Indonesia Earthquake and Tsunami
Next Up: Editor's Pick