Donald Trump Could Lift Democrats to Victory in Kansas

Mary Joyce of Overland Park, Kans., is a lifelong Republican. Her husband Dave has voted for both parties, but idolizes Richard Nixon as one of the nation’s greatest presidents. Two years ago, the couple did what they usually do: voted a straight Republican ticket, including a vote for Donald Trump for President and Kevin Yoder for Congress. Thanks to voters like the Joyces, Trump won Kansas by more than 20 points, while Yoder won the state’s 3rd Congressional district by more than 10.

But on a sunny day in late October, as yellow leaves fanned off late-autumn trees, the Joyces walked into their local early-voting location and voted for two Democrats: Laura Kelly for Governor and Sharice Davids for Congress. “I got tricked into voting for Trump,” says Mary Joyce, 55. “I’m sorry I did.” And while Yoder has been her Congressman for nearly a decade, Joyce wants to replace him with Davids, a 38-year old lesbian attorney who would be one of the first Native American women in Congress if she’s elected. “I want Yoder out of there,” she says.

If Democrats win the House in November, it will be partly because of people like Mary Joyce: Trump voters who aren’t part of his rabid base; suburban women who are fed up with the President’s antics; and conservatives who have less loyalty to the GOP than party leaders would like to believe. It will be, in short, because of places like Kansas’s 3rd district, where Yoder is trailing Davids in a district that now leans Democratic, according to the nonpartisan Cook Political Report.

Meanwhile, Davids is just the kind of candidate Democrats are counting on Nov. 6. She’s part of a group of first-time Democratic female candidates running for office in record numbers this year. Davids has the support of groups like Emily’s List, which works to elect pro-choice women Democrats. She’s moderate enough to attract voters like the Joyces: she wants to work within the current health care system instead of rushing to implement Medicare for All, and she supports immigration reform but not abolishing ICE (a position she clarified after first suggesting she did want to get rid of the agency.) While some progressive voters are drawn to her campaign because of the possibility of electing the nation’s first Native American woman to Congress—as well as Kansas’s first openly LGBTQ representative—Davids talks less about her heritage or her sexuality than her experience as a first-generation college student.

“We don’t have enough people in Congress who know what it’s like to go to community college,” says Davids, who went on to graduate law school and still carries more than $100,000 in student debt. “There are a lot of issues like that that I am probably a little more familiar with than maybe some of the folks who have been in Congress for a really long time.”

The race remains close, and Yoder still has a slight fundraising edge in the contest. But Davids has raised nearly $4 million, mostly from individual donors. And the National Republican Congressional Committee recently canceled a $1.2 ad buy for Yoder, an acknowledgement of the incumbent’s vulnerability.

“If you asked me six months ago, I would have said that she has a chance but odds are the incumbent will win,” says Don Haider-Markel, professor of political science at the University of Kansas. “It definitely leans in her favor right now.” Haider-Markel says the district is a perfect example of the kind of district that could be hard for Republicans to keep this year: moderate, suburban, full of college-educated women who may have voted Republican in the past but are sick of Trump. The President is still popular in this state that voted overwhelmingly to elect him, but his numbers have gone south here: according to a Morning Consult poll, 46% of Kansas respondents now disapprove of the President, up from 32% at the beginning of his term.

Not everybody agree that Davids’ momentum is real. “I suspect the same phenomenon that concealed support for Trump in 2016 is probably at play,” writes Paul Johnson, director of the Center for Research Methods and Data Analysis at the University of Kansas, in an email. “I expect there is a silent anti-female, anti-liberal, anti-Native-American, anti-gay segment of the population that does not appear too well in phone polls, but they have a tendency to show up on election day.”

But voters outside an early voting location here represented the spectrum of voters that Democrats need to reach in order to pick up seats like this one: suburban women, newly eligible young people, and people with pre-existing conditions who are concerned about the GOP’s plans for the nation’s health care system.

Mary Conley, 62, said that she voted for Davids to get “fresh blood” in Congress. Her husband Tom Conley, 63, has prostate and rectal cancer, and went to vote on Saturday wearing a small black pouch that contained his chemotherapy treatment. “It’s actually a matter of life and death,” says Mary Conley. “If our insurance didn’t cover $120,000 of his treatment per month, he’d be dead in 8 months.”

Mary Joyce also has a pre-existing condition: a rare form of muscular dystrophy that requires her to walk with a cane and may ultimately claim her life. But she spoke less about health care coverage and more about putting a check on the President she voted for. “I believed what he said, his campaign promises, to make America great again,” she says. “I feel he’s made a sham of the office.” 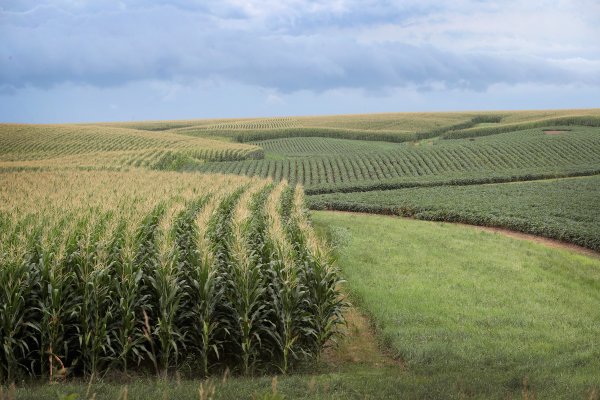 Why Farmers Are Sticking With Trump
Next Up: Editor's Pick