What to Know About Pittsburgh Synagogue Shooting Suspect Robert Bowers

The man who allegedly killed 11 people and wounded six others in an anti-Semitic attack on a Pittsburgh synagogue could face the death penalty, authorities said.

Authorities identified the suspect as Robert Bowers, 46, of Baldwin, Pennsylvania.

Police say the gunman entered the Tree of Life Synagogue in the Squirrel Hill neighborhood of Pittsburgh and shot people in each of the three congregations that was holding services in the building. He then reportedly barricaded himself in the third floor of the temple and engaged in a shootout with police before being taken into custody.

Who is the Pittsburgh shooting suspect Robert Bowers?

In a short briefing, the City of Pittsburgh’s Public Safety Director Wendell Hissrich said that the suspected shooter was wounded in a shootout with police. He was taken to the hospital.

He was in fair condition on Sunday and has a court appearance scheduled for Monday.

What was Robert Bowers’ alleged motive for the shooting?

Authorities say Bowers’ attack on the synagogue is a hate crime. According to federal charging documents, Bowers told an officer, “I just want to kill Jews.”

President Donald Trump, at an event in Indianapolis, called the attack “anti-Semitic act.”

Prior to the shooting, someone with the username Robert Bowers posted multiple anti-Semitic and anti-immigrant messages on the social networking site Gab.

Hours before the shooting, the user posted: “HIAS likes to bring in invaders that kill our people. I can’t sit by and watch my people get slaughtered. Screw your optics, I’m going in.”

HIAS, the Hebrew Immigrant Aid Society, is a nonprofit organization that provides humanitarian aid and assistance to refugees.

Gab is a competitor of Twitter that says it puts “free speech first.” It has a large following among members of the so-called alt-right and other conservative groups. The site has faced issues promoting its app on Google Play and Apple app stores.

In a statement, the social media site indicated it suspended the account and referred it to federal authorities.

“Shortly after the attack, Gab was alerted to a user profile of the alleged Tree of Life Synagogue shooter. The account was verified and matched the name of the alleged shooter’s name, which was mentioned on police scanners. This person also had accounts on other social networks,” Gab said.

Gab said that it rejects violence.

“Gab unequivocally disavows and condemns all acts of terrorism and violence. This has always been our policy,” the network said in a statement obtained by TIME.

What are the charges?

The U.S. Attorney for the Western District of Pennsylvania announced late Saturday that Bowers was being charged with 29 counts based on federal hate crimes laws. Included in the charges are 11 counts of obstruction of religious beliefs resulting in death.

Of those, 22 counts are potentially punishable by the death penalty, U.S. Attorney Scott Brady said Sunday.

What was the gunman armed with?

Bowers was armed with a Colt AR-15 SP1 assault rifle and three Glock .357 SIG-caliber semi-automatic handguns, authorities said at a press conference Sunday. Authorities said all four weapons were fired during the shooting. He was injured in confrontation with officers and transported to a local hospital, where an official at the press conference said he was in fair condition. 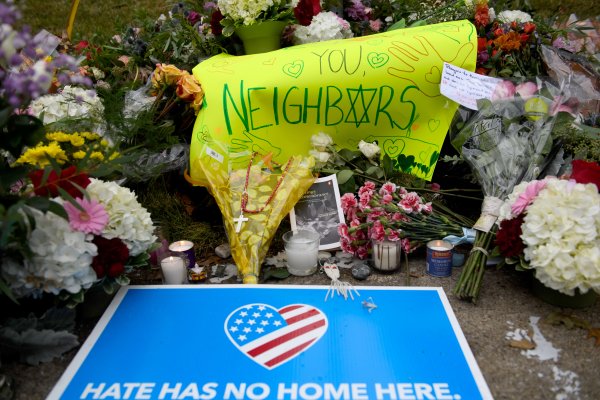 Victims of Pittsburgh Synagogue Shooting Identified
Next Up: Editor's Pick