President Donald Trump said the “results would have been far better” if the Pittsburgh synagogue where a gunman killed multiple people had an armed guard.

In his first remarks after the shooting, the President also said the United States needs to “stiffen up” death penalty laws.

In response to a question about whether the shooting Saturday at the Tree of Life Synagogue should spark questions of increased gun control, Trump said: “If they had protection inside, the results would have been far better. If they had some kind of protection within the temple it could have been a much better situation. They didn’t.”

It was a point he repeated several times in his remarks to reporters at Joint Base Andrews a few hours after the shooting. Trump was en route to an event in Indianapolis Saturday.

He later added: “This is a case where if they had an armed guard inside they may have been able to stop him immediately, maybe there would have been nobody killed, except for him maybe.”

Trump continued with his plans to hold a campaign rally Saturday for Rep. Mike Bost in Murphysboro, Illinois. At the beginning of the rally, he condemned anti-semitism as intolerable. Defending his decision not to reschedule the rally, he argued that to do so would be a victory for the suspect. “We can’t allow people like this to become important,” he said. “We change all of our lives in order to accommodate them its not acceptable.”

Trump also noted that the New York Stock Exchange opened the day after the terrorist attacks Sept. 11, 2001. But it actually opened six days after those attacks.

Trump has advocated for arming teachers and increasing the number of armed officers in schools in response to calls for tougher gun control measures following school shootings in Florida and Texas.

Michael Eisenberg, the past president of the Tree of Life Synagogue, told KDKA-TV that the synagogue has never had threats or security concerns. “Like most other religious places, we have an open door,” he said

Alvin Berkun, rabbi emeritus at Tree of Life and a Pittsburgh police chaplain, told KDKA-TV that the synagogue hires off-duty police officers for the high holidays, “but on a normal weekend we don’t do that.”

On Saturday, Trump also said that the United States should make it easier to execute people who commit crimes like the shooting at the synagogue.

Pennsylvania has the death penalty. And the death penalty is still an option in federal crimes. Police in Pittsburgh said Friday that the FBI was taking over the investigation because it appears to be a possible hate crime.

Trump also said that it’s difficult for him as President to see violence of the kind that happened in Pittsburgh.

“It’s a terrible terrible thing what’s going on with hate in our country frankly and all over the world, and something has to be done,” he said.

Trump promised a “major statement” at the event where he is speaking Saturday night in Indiana. 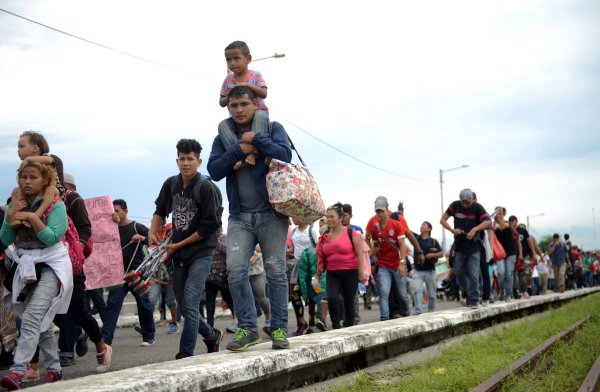