What to Know About Cesar Sayoc, the Mail Bomb Suspect

By Mahita Gajanan and Abigail Abrams

Sayoc has been charged with five federal crimes and faces up to 58 years in prison, Attorney General Jeff Sessions said during a news conference.

Here’s what to know about the suspect behind the mailed package bombs.

Cesar Sayoc is a 56-year-old man who was detained Friday in Plantation, Florida

Records for Sayoc show he is associated with an address in Aventura, Florida, and is registered as a Republican in Florida. According to Florida criminal records, Sayoc was born in New York.

Authorities are seen in Plantation, Florida taking a man into custody in connection to the mailed package bombs.
Photo Courtesy WPLG

The van was covered in stickers that show President Donald Trump and the presidential seal, among other pictures. Authorities have not said whether the van is connected with Sayoc.

Sayoc was previously arrested for making a bomb threat

Sayoc was arrested in 2002 in Miami for making a bomb threat. Records say he threatened to “throw, place, project or discharge” a destructive device.

Criminal records show Sayoc was arrested on multiple other occasions for fraud, tampering with evidence, drug possession and unlawful use of a driver’s license.

Seminole Tribe says Sayoc was not associated with them

A Twitter account that matched Sayoc’s name made frequent references to the Seminole Tribe and appeared to discuss having Native heritage. The account’s bio says the owner works at the Seminole Hard Rock Live. However, the Seminole Tribe said Friday that Sayoc was not involved with the tribe.

Some posts also made reference to the upcoming midterm elections, saying things like “Red Wave 2018” and showing images that encouraged followers to “Vote Republican.”

What was the motive for sending the mail bombs?

Federal officials declined to discuss Sayoc’s motive on Friday, saying that the investigation was still ongoing.

Attorney General Jeff Sessions said he did not know why the suspected bomber was targeting Democrats. “He appears to be a partisan,” Sessions aid.

Wray added that while the FBI believes it found “the right guy,” the agency does not know if there were more people sending mail bombs if there are more bombs that have not yet been discovered. 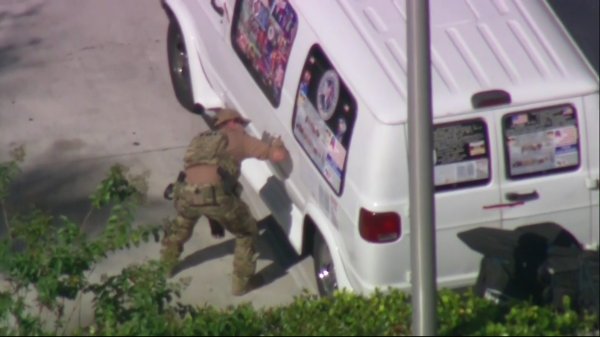 'These Are Not Hoax Devices'
Next Up: Editor's Pick