'These Are Not Hoax Devices': FBI Warns More Explosives Could Be in Mail After Making Arrest

Federal authorities warned there could be more mail bombs in circulation as they announced they arrested a 56-year-old Florida man in connection with explosives sent to prominent Democrats and critics of President Donald Trump.

At a Department of Justice press conference Friday afternoon, FBI Director Christopher Wray said while none of the 13 intercepted devices exploded, analysis has found that they were still functional and capable of causing harm.

“These are not hoax devices,” Wray said.

Authorities did not comment on Sayoc’s motives but his social media accounts appear to show he shared right-wing conspiracy theories and was an avid Trump supporter. Attorney General Jeff Sessions confirmed that Sayoc was specifically targeting Democrats.

“He appears to be a partisan,” Sessions said.

Officials confirmed that Cesar Sayoc of Aventura, Florida was arrested and charged with five federal crimes including interstate transportation of an explosive, illegal mailing of explosives, threats against former presidents, threatening interstate communication and assaulting current and former federal officers. Authorities said Sayoc faces up to 58 years in prison if convicted.

FBI Director Christopher Wray said Sayoc sent 13 improvised explosive devices (IED) to various individuals across the country, each of which consisted of six inches of PVC pipe, a small clock, a battery, wiring and “energetic material” that could potentially cause the device to detonate or burn.

Wray said Investigators were able to identify Sayoc after matching his fingerprints on one of the envelopes sent to Congresswoman Maxine Waters.

Aerial television footage showed federal agents seizing a white van at the site of Sayoc’s arrest. The van was covered in pro-Trump stickers as well as stickers with sniper targets over prominent Democrats including Hillary Clinton and filmmaker Michael Moore. Authorities have not confirmed if the van belonged to Sayoc.

Authorities are seen Plantation, Florida taking a man into custody suspected of being connected to the series of mailed packaged bombs.
Photo Courtesy WPLG

Arrest records show that Sayoc has an extensive criminal record that dates back 27 years and include multiple charges of grand larceny and drug possession. In November 2002 Sayoc pleaded guilty to charges of making bomb threats.

Shortly after Sayoc was arrested, President Trump addressed the investigation into the bomb packages at the Young Black Leadership Summit at the White House.

“These terrorizing acts are despicable and have no place in our country. No place,” he said. “We must never allow political violence to take root in America.”

On Friday morning, the FBI said a package had been recovered in Florida that was addressed to Democratic Sen. Cory Booker of New Jersey. New York police confirmed a suspicious package had been found at a Manhattan post office addressed to James Clapper, the former Director of National Intelligence and critic of President Donald Trump. Senator Kamala Harris confirmed that a suspicious package sent to her Sacramento office on Friday was intercepted by authorities, followed by Democratic philanthropist Tom Steyer, who confirmed that a suspicious package sent to his Burlingame, Calif. office was intercepted at a mail facility. It is unclear if the package sent to Steyer is connected to the 13 authorities said were found in the nationwide investigation. 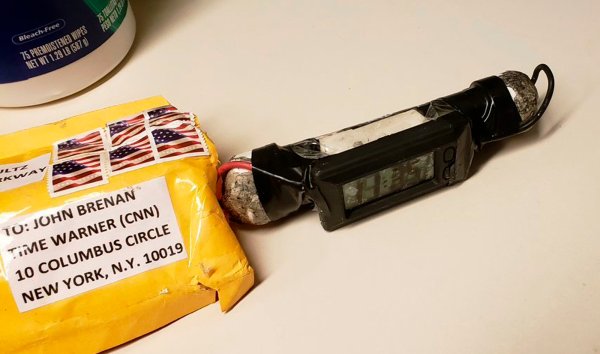