Trump Wants to Leave a Nuclear-Weapons Treaty. Here’s What Happened When Arms Control Failed in the 1930s

Twice in the 20th century, the great powers tried to create a peaceful world for the long run by limiting armaments. And, with recent developments, it appears as if those efforts have twice failed. The first failure led directly to the Second World War. We do not know where the second will lead.

The first attempt at disarmament followed the First World War, which shocked Europe and persuaded many that a second such war might mean the end of civilization. The process began with the Treaty of Versailles, which the British and French forced the new German government to sign. After blaming Germany and its allies for starting the war — a judgment that later generations of historians endorsed — they limited the Germans to a tiny army of 100,000 men and a small navy without battleships of the first rank, and forbade them from having any air force at all. But the treaty also characterized these restrictions as the first step towards general disarmament, committing the victorious nations to going down the same road. They did not take immediate steps to do so, but another disarmament effort began shortly thereafter.

In 1921, Secretary of State Charles Evans Hughes convened the Washington Conference to discuss, among other topics, naval disarmament among the leading maritime powers, Britain, the United States, Japan, France and Italy. The United States at that time had committed itself to a Navy second to none and had decided in principle to build 48 battleships, one for every state. Hughes stunned the conference by suggesting that all the major powers drastically cut back on their future building plans.

Eventually all agreed to much smaller navies, freezing the battleships of the U.S., Britain and Japan at a 5-5-3 ratio that would in theory make it impossible for them to risk a naval war against one another. In 1930, at a second conference, they also agreed on ratios for some smaller ships.

Meanwhile, in 1932, after years of wrangling, the European powers finally sat down in Geneva to discuss a general disarmament agreement. Both the British and French governments finally realized that they had to do some disarming of their own, and perhaps allow Germany some small increases in its forces and allow it to have some different types of weapons.

Unfortunately the Great Depression was now at its height, and the German government faced a political crisis. Before agreement could be reached, Adolf Hitler became German chancellor in January 1933. After the French government refused to allow him to triple the size of the German army, he quit both the disarmament conference and the League of Nations. In early 1935 he went further, repudiating all the restrictions of the Versailles Treaty, re-instituting a draft and announcing the creation of a new air force.

In Japan, meanwhile, naval and military officers had terrorized the civilian government by assassinating some leading politicians, and had seized Manchuria in 1931. They now wanted to make Japan the supreme power in East Asia, and they needed a navy that could defeat the Americans or the British to do so. In 1936, when yet another conference convened to revise the 1930 naval treaty, the Japanese refused to participate and made clear they would no longer be bound by earlier treaties. The major nations all began building new classes of larger battleships. The Second World War began in 1939.

That war, and the threat of nuclear arsenals, eventually moved the victorious powers to take steps to limit nuclear weapons, in a second 20th-century period of arms limitation. The Nuclear Test Ban Treaty of 1963, which stopped above-ground testing by the Americans, Soviets and British. In the Nuclear Non-proliferation Treaty, signed in 1968, most non-nuclear powers renounced nuclear weapons in return for promises from the leading nuclear powers to give up theirs. Then came the SALT I and SALT II agreements of 1972 and 1979, which banned anti-ballistic missile systems and set limits on Soviet and U.S. missiles. (Although the United States never ratified SALT II, successive administrations observed it.) The advent of Mikhail Gorbachev and the collapse of Communism opened up the possibility of a new era of world peace, and Reagan and Gorbachev eliminated intermediate-range missiles from their arsenals in the INF treaty in 1987. Subsequently, Presidents Clinton and Obama signed new START agreements with the Russian government in 1991 and 2010, limiting their nuclear arsenals much more.

But during the last 18 years, the drama of the 1930s — in which individual powers refused to limit armaments and destroyed the disarmament effort — has replayed itself. This time, however, the disruptive power that has renounced arms control is the United States.

The neoconservatives who began to dominate Republican thinking on foreign policy in the 1980s and 1990s never believed in arms control, which they saw as a trap, and instead favored U.S. military supremacy. They also seized on Ronald Reagan’s idea that missile defense, rather than agreements, might protect the U.S. from hostile nuclear weapons.

Those ideas became orthodoxy in the Administration of George W. Bush, and in December 2001, he announced that the U.S. was withdrawing from the ABM treaty. In the following year the U.S. government also announced a new non-proliferation strategy. Rather than rely on international agreements, it would simply make war on any nation that sought to acquire nuclear weapons if the U.S. government did not think they should have them.

John Bolton was one of the leading neocons in the Bush II Administration, and he is now Donald Trump’s National Security Adviser. This month the President has announced that he plans to withdraw from the INF treaty as well. Meanwhile, Russia’s President Putin has stated that his country is developing new weapons because of the American withdrawal from the ABM treaty. Just this Thursday, two titans of the Cold War era — Mikhail Gorbachev and George P. Shultz — called for maintaining existing treaties in the New York Times.

The two disarmament efforts of the last century aimed at making great-power war impossible by limiting and reducing great armaments. Recent Republican administrations have abandoned those efforts because they believe that U.S. military supremacy, not diplomacy, is the solution to the power of world peace.

Disarmament failed completely in the 1930s and remained controversial in the Cold War period. Yet it represents mankind’s best hope for a better world. If the United States, the world’s strongest power, abandons that hope, our planet can only get more dangerous. 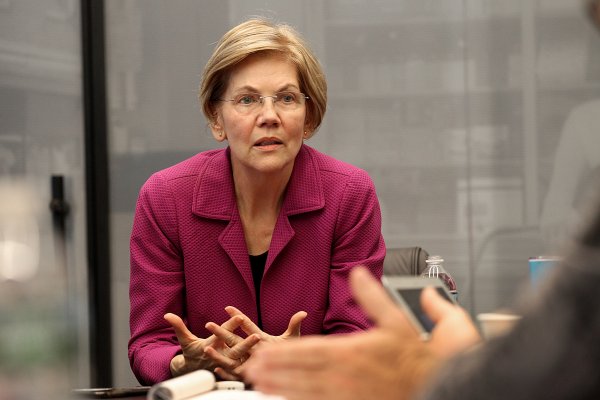 Elizabeth Warren's DNA Test and the Difficult History of Looking for Answers in Blood
Next Up: Editor's Pick