No Wonder America Is Divided. We Can't Even Agree on What Our Values Mean

An American flag that circles the Washington Monument is seen split nearly in two June 12, 2018.
Sarah Silbiger/CQ Roll Call
Ideas
By Frank Luntz
Luntz is a pollster and communication advisor. He is conducting focus groups for HBO and Vice News ahead of the 2018 elections.

These days, it feels like any group of three or more Americans talking politics can’t make it past the first minute before the animosity and cynicism boils over and derails the conversation. Too many of us are too angry to listen, to learn or — God forbid — to work together to get anything done.

Even our language is being torn apart. We are increasingly unable to agree on common meanings for common words — including those that define our nation’s most fundamental values.

For example, earlier this year, I asked a focus group in Orlando, “Is America exceptional?” Almost all Republicans said yes, along with half of the Democrats. But as it turns out, the same word means very different things to very different people.

To Republicans, exceptional means that we are the best — that shining city on a hill, a beacon of hope, the greatest nation in the world — an example for other nations to follow. To Democrats, exceptional does not mean that we are greater compared to other places, because lots of other places (and people) are also great. It means there are things about America that they love — freedom, opportunity, individual rights — that make America great, but not necessarily great-er. That explains why, in a survey we conducted in May for the organization One People— 81% of Republicans but only 52% of Democrats believe “America is clearly the greatest nation in the world.”

Common words like these no longer have common meaning — even when we think they do. To paraphrase (or, rather, mangle) Churchill: we really are two different Americas, “divided by a common language.”

There are more examples. In that Orlando focus group, the Republican participants refused to choose “democracy” as a “great thing about America,” because, in one participant’s words, “We are a republic, not a democracy.” To this, a Democrat from Orlando rolled her eyes and said, “You just don’t like any word with ‘Democrat’ in it.”

And then everyone started shouting.

Moments later, several Democrats refused to celebrate “equality” in America because, in their words, “We haven’t reached equality. Many people are treated as second-class citizens.” To this, a Republican shot back “America has more equality than anywhere else … and you’re just playing the ‘race card.’”

And then everyone started shouting.

It’s not just the policies we disagree on. Our worldviews often no longer overlap. For example, 62% of those in the One People poll still agree that “America is a place where if you work hard and play by the rules, you can get ahead.” But while an overwhelming 78% of Republicans embrace that sentiment, barely a majority (57%) of Democrats agree. We are only now realizing how large the space between the tribes is.

About the only consistent trait we still share is anger. A casual glance at Facebook, Twitter or the comment section from just about any publication would make an insult comic blush. We have slid from disagreement to disdain to dehumanization.

But while we so quickly point to and yell at our opponents, the real threat is ourselves — that we are losing faith in our democracy and trust in each other. Our greatest strength historically — that “We the People” share a common goal, idea, and even a national dream — is now a glaring weakness, as we cheerfully slice the ties that once bound us together.

Today, more than one-quarter of Americans (27%) acknowledge personally terminating a friendship or cutting off a member of their family since the 2016 election. That means more than one in four readers of this column have excommunicated — or, even more likely, been excommunicated by — someone once important in their lives. Not just because people disagree, but because people who once loved one another can’t stand to listen to each other anymore. (By the way, Democrats are the more aggrieved, aggressive bunch: 31% terminated a personal relationship because of politics, compared to just 19% of Republicans.)

We are not heading towards a communication and common ground crisis. We’re in one already, and we can’t go on like this.

Polling further proves the point. I provided voters in the One People poll a list of 16 different objectives for America and asked, “Which is most important for making America a better, stronger place where everyone is lifted up together?”

For Republicans, the top choice was, “A genuine commitment to the Constitution and what it says and means.” Among Democrats, that response placed 8th out of 16. Second place for Republicans? “Restoring the essential role and responsibility of the family.” Democrats ranked that 15th out of 16.

So it is not surprising that 81% of Americans assert that “America is more divided today than at any other time in my lifetime.” Even more significantly, 87% of those 65 and older — the people who remember Vietnam and the assassinations of MLK and RFK — believe this is the worst it’s ever been. We all agree there is a problem with division, but it’s always the other side’s fault.

There is only one attribute about America that everyone still embraces: “freedom.” It was first among Republicans and second among Democrats (behind “diversity”). Yet even here, the subtle differences are significant. For Democrats, it’s freedom from — discrimination, racism, poverty, etc. It’s an alleviation of fear, and it often requires active institutional intervention to make it happen. For Republicans, it’s freedom to — own a gun, practice your religion. It’s the ability to do what you want, when you want, and it is primarily about being left alone.

Only on a few issues, like education and, surprisingly, guns do we find common ground. For example, “A quality public education is a fundamental right for every American child” has the support of 77% of Republicans and 90% of Democrats.

Yet it is the response to the recent shootings, like those in Parkland, that is most eye-catching. Eight in ten Americans think we should regulate guns the way we regulate cars.

Who would have thought that 70% of Republicans and 87% of Democrats would agree on a comprehensive approach to gun safety? But the question remains: is anyone listening? 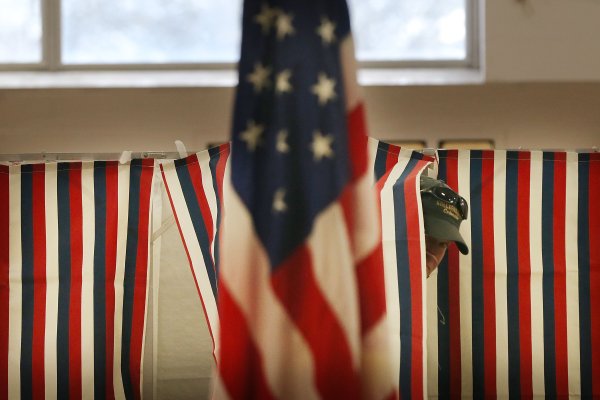 Should You Be Afraid of Election Hacking? Here's What Experts Say
Next Up: Editor's Pick