Movies about rock stars are like movies about religious figures: There’s always someone around to say, “That’s not the Jesus I know!” Is Bohemian Rhapsody an accurate portrayal of Freddie Mercury, the extravagantly charismatic lead singer of Queen who died prematurely, in 1991, of AIDS-related pneumonia? Does it do justice to his legacy as a rock’n’roll prince with a four-octave range? Does it depict his sexuality in a way that’s acceptable to all?

Who’s qualified to say? In strict filmmaking terms, Bohemian Rhapsody is a bit of a mess. Some of its scenes connect awkwardly, and it hits every beat of disaster and triumph squarely, like a gong. Yet if it has many of the problems we associate with “bad” movies, it has more ragged energy than so many good ones, largely because of Rami Malek’s performance as Mercury, all glitter and muscle and nerve endings. This is a movie about music, fame, love and the sliver-of-a-moon distinction between confident showmanship and hubris. There are also cats, floaty silk kimonos and leather jackets. It’s a movie for sensualists, not quality-control experts: You know who you are.

Before Freddie Mercury was Freddie Mercury, he was Farrokh “Freddie” Bulsara, born in Zanzibar of Parsi descent; his family came to England when he was in his late teens. The early scenes of Bohemian Rhapsody, set in London in the infant years of the 1970s, show how young Farrokh worked that transformation, with a lot of attitude and a few tiny girls’ jackets from Britain’s legendary boutique Biba. The young woman he meets and falls for, Mary Austin (played, with charm and vigor, by Lucy Boynton), works there, and she takes delight in dressing him up in velvet and sequins. How could she not? He’s so fabulous and strange and beautiful, with his shaggy no-style hair and prominent choppers, that none of fashion’s rules should bind him. In these early scenes, Malek looks more like Prince than like Mercury—but even that gets you thinking about how pop royalty cross-pollinates, across genres and oceans.

Around that time Freddie also insinuates himself into a band, soon to be known as Queen. Before long, he and his bandmates, guitarist Brian May and drummer Roger Taylor (played here by Gwilym Lee and Ben Hardy, styled to look miraculously identical to their real-life counterparts), will have an international hit, “Killer Queen.” The movie shows them lip-syncing the song on BBC’s Top of the Pops; the visual symphony is one of fake fur, nail-polish and rhinestones. In the movie’s vision, as in real life, Mercury continually pushes the band to renew itself: We see them recording the weird and ambitious mini-opera “Bohemian Rhapsody,” its tape-stretching, multi-multi-tracked harmonies as meticulously manicured as the topiary in a French garden. Later, Freddie and his bandmates will have to defend the song to unimaginative EMI exec Ray Foster (played, with a gruff twinkle, by Mike Myers). Success is already theirs, but they want more.

Somewhere between those early days and the movie’s dazzling finale, a re-enactment of the band’s astonishing 1985 Live Aid performance—which, as the movie shows us, almost didn’t happen—Mercury changed his look, trimming his hair short and growing the neatly molded mustache that would become his signature. He also came to acknowledge that he was gay, a transition Malek navigates not gracefully but realistically, like an astronaut re-entering Earth’s atmosphere and finding the ride so bumpy he barely survives it.

Bohemian Rhapsody is, as everyone knows by now, the textbook example of a troubled production, churning through several stars (Sacha Baron Cohen, Ben Whishaw) and a few directors on its way to the screen. The final film is credited to director Bryan Singer (who has been the subject of multiple sexual-assault allegations), though he was fired from the project in the last weeks of its filming—his replacement was Dexter Fletcher, who’d been selected to direct one of the film’s earlier incarnations. The movie now arrives in theaters, trailing doom like a ghostly shroud. How could this thing ever succeed? From the start, it needed to serve so many masters: The gay community, millions of Queen and Freddie Mercury fans, everyone who goes to a rock’n’roll biopic thinking, if not saying outright, “This is going to suck.”

But Bohemian Rhapsody doesn’t suck. There’s a soul inside it, and some anguish, too. Malek’s onstage strut, brazen as a panther’s, shows us that being Freddie Mercury must have been great. But his gaze reveals that it also couldn’t have been easy: Malek’s eyes are disarming to the point of being disorienting, like the pinwheels used by hypnotists. There are few films that explore what can happen when a gay man falls in love with a woman—I don’t mean a fake, happily-ever-after conversion story, but one that deals with the implosion of both parties’ romantic dreams. Here, it’s as if Malek were channeling Mercury’s deepest secrets: His hidden shyness, his feelings of isolation, his reluctance to come to terms with his sexuality. Even after Freddie and Mary break up—she acknowledges the truth before he does, blurting out, “Freddie, you’re gay!”—he insists he wants her in his life, setting her up in a flat next-door to his own luxurious London pad. At night he gazes into her window; as Malek plays the moment, it’s not sexual longing Freddie feels but a raw, indefinable loneliness that goes beyond human desire. It’s never easy to come out, but there was a time when support systems were fewer, and we didn’t have as many words to explain who we loved and why—not that any of it should ever need explaining. Malek conveys all of that with his restless, electric intensity. And the sequence in which he learns he has AIDS is a quiet marvel.

There’s also debauchery and rock-star excess in Bohemian Rhapsody, because that, too, is part of Mercury’s story. But the movie ends in its natural place, not with Mercury’s death, but with that spectacular Live Aid re-enactment. Malek mouths the songs, though in the end what we hear is an amalgam of Mercury’s voice and that of Canadian singer Marc Martel, and the sound is magnificent. Malek-as-Mercury prowls from one end of the stage to the other, his arms stirring a storm front in the air around him; this performance is gorgeously carnal in its physicality. Just as wondrous is the way the audience moves, in rippling waves, in response to him—as if they’re a sea of iron filings and he’s got magnets in his fingertips. That was the kind of magic Freddie Mercury could work with a crowd, captured perfectly in this imperfect movie, one that exists almost against all odds. But then, what is rock’n’roll if not a language of fortuitous mistakes? Sometimes the bent note, beginning as one thing and ending up another, is the one that sounds just right. 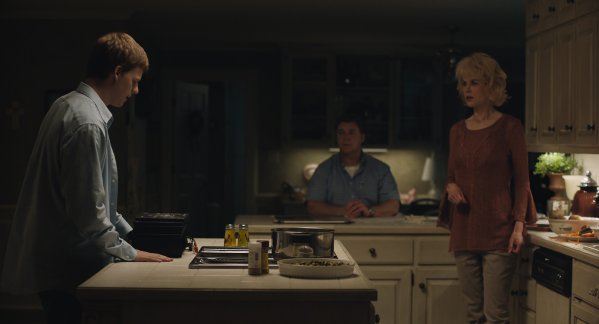 Lucas Hedges Is the Beating Heart of the Dutiful Boy Erased
Next Up: Editor's Pick