The Divorce Rate Is Dropping. That May Not Actually Be Good News

Have you heard that statistic that half of all marriages will end in divorce? It’s wrong. Even if that many marriages ever did disintegrate at one point, they don’t now. Divorce is on the decline and has been since the 1980s in America (when that 50% divorce statistic took hold). Experts now put your chances of uncoupling at about 39% in the U.S. This sounds like such promising news. Families are sticking together! But in practice, this does not mean more people are living happily ever after.

The drop in divorce statistics seems to be, in large part, due to the much-maligned Millennials making their marital vows stick far more often. One recent study says that, compared to their 2008 counterparts, young people in 2016 were 18% less likely to get divorced. That study has not been peer-reviewed but is echoed by the trend in the U.K., which keeps much more robust divorce data. Young Brits’ marriages are 27% more likely to make it through their first decade — the prime divorcing years — than those who got hitched in the ’80s.

So have millennials cracked the code on having and holding as long as they both shall live? Not exactly. One reason divorce is less common among that age group is that marriage — and all of its advantages, from survivor benefits for social security to healthier children to a lower chance of heart attack — is becoming more selective. Once considered a starting block for young people, a launchpad to get them underway as they took the plunge, getting married is now more of a high diving board, a platform for publicly demonstrating that they’ve achieved. The people getting all those marital advantages are those with the most advantages to begin with.

Census figures released on Nov. 14 show that the median age at first marriage in the U.S. is now nearly 30 for men and 28 for women, up from 27 and 25 in 2003. This does not mean that Millennials have stopped living with someone they fancy, though. Cohabiting is becoming a norm in most Westernized countries. In 2018, 15% of folks ages 25 to 34 lived with an unmarried partner, up from 12% a decade earlier. More Americans under 25 cohabit with a partner (9%) than are married to one (7%). Two decades ago, those figures weren’t even close: 5% were cohabiting and 14% were married.

Young couples are delaying marriage not because they’re waiting to find The One, but so that they can feel financially secure. And as jobs for those who stopped their education at high school have become more tenuous, and as income inequality has pushed the have-lots and have-somes further apart, that security recedes further into the distance for a lot of young couples.

Not exactly. There are two types of cohabitation. The type people do because they’re almost sure they’ve found a good match, but want one more run-through to check, and the type people do because it solves a looming liquidity, logistical or loneliness problem. Studies have shown that low-income couples tend to move in together sooner than college-educated ones. And those couples who move in together sooner are less likely to get married.

All of this would be nothing more than bad news for the wedding venue industry, except that often cohabitees whose togetherness is the result of happenstance rather than planning often become parents. A Brookings Institute analysis found that there’s a 50-50 chance that a child born to a cohabiting couple was not planned. And according to Pew Research, more than one of every two children born to cohabiting parents will endure a parental breakup by age 9, as opposed to only one-in-five born within a marriage. They’re also more likely to be poor: 16% of cohabiting parents are living below the poverty line, while just 8% of married parents are. And should they split up, things get more dire; 27% of solo parents live in poverty.

The other cohabitees, who move in together after dating for a long time as the last stop on the journey before conjoining their lives legally, rarely get pregnant before tying the knot. And they have about the same success with marriage as those who didn’t live together beforehand. This is especially the case if they are wealthy and have a degree. Divorce among college-educated couples who married before they had children is at levels as low as in the 1970s, before the wide adoption of the no-fault statutes made divorce much less of a legal nightmare.

So yes, the people who are getting married are increasingly staying married. But that group is an ever-smaller and more privileged group of individuals. Marriage is becoming one of the many institutions from which the poor, less-educated and disadvantaged are excluded. And this isn’t just sad because more than half of those who have never married would like to be. It’s sad because it compounds the difficulties of those who already face considerable challenges. Marriage, or the long-term committed relationship between two people that it’s meant to support, is both subject to and contributing to inequality. In its current form, it’s making the climb out of poverty just that much steeper. Which is not romantic at all. 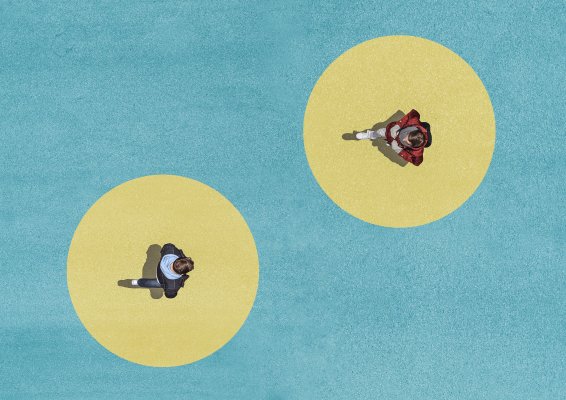 How to Make Friends as a Middle-Aged Man, Even If the Idea Makes You Feel Weird
Next Up: Editor's Pick