Why a 'Strong, Charismatic' Leader Is Not the Solution to America's Tumultuous Times

Ideas
By Stanley McChrystal
McChrystal is a former Army General, founder of the McChrystal Group, the founding chairperson of Service Year Alliance, and a co-chair of the Serve America Together campaign to make national service part of growing up in America.

In the first weeks of 2010, Coalition Forces under my overall command launched an operation to retake the Taliban-controlled district of Marjah in Afghanistan’s Helmand Province. We possessed the firepower to utterly destroy any Taliban resistance. But in the days preceding, I had met with a group of Marjah’s tribal elders, who approved of our effort only on the understandable conditions that the assault not destroy their homes or harm the population. So for that, and other reasons, an operation was conducted that minimized the use of artillery and air strikes, even though it dramatically increased the danger to our soldiers.

I knew that asking coalition soldiers far from home to accept greater risk by displaying what they termed “courageous restraint” was a tall order. Many were understandably reluctant while in pursuit of murky political gains. And, from afar, other observers opined that such a tepid approach to battle appeared weak and risked defeat, with little chance for decisive victory. They had a point. We might have appeared to win convincingly by pulling Taliban bodies from the smoking rubble of ruined farms, shops and homes. But victory must be measured by its sustainability over time. Overcoming a foe, joined by enraged civilians — whose survivors would only regroup with hardening resolve to carry on the war — doesn’t constitute a true victory. Winning, it can be argued, isn’t quite all it’s cracked up to be. Despite our preoccupation with victory, winning is often a double-edged sword.

Eight years on from my Army career, I’ve been surprised to see the “win-at-all-costs” attitude applied to our politics at home. Causes, campaigns and crusades are fueled by self-righteous enthusiasm in the struggle against those who we assess as wrong-headedly seeking to oppose us. “If they can’t be convinced,” we think, “they must be defeated. If in defeat they refuse subjugation, they must be destroyed. At all costs, we must win.”

Though the exact nature of our problems might be unique, it’s certainly not the first time in American politics that we find ourselves in a place where it’s much easier — and a more certain path to electoral victory — to destroy one’s opponent rather than attempt to find common ground, or at least mutual respect.

Of course, some things are worth fighting for — at critical moments in our history, we’ve had winners and losers. The fatal trap is that an objective of “destroying” your political opponent is absurd. A functioning democracy not only has, but needs, at least two viable parties, not a triumphant victor and an opposition left hopelessly vanquished. The writers of the Federalist Papers correctly assessed that checks and balances were needed to defend ourselves from our own worst instincts — as James Madison famously wrote in Federalist 51, “Ambition must be made to counteract ambition.” Total victory or “catastrophic success” can be the worst of calamities. There’s a point in the “fight” when we must understand that effective negotiation and compromise is not only the best course of action — but it’s the only one that could possibly maintain a political environment where future two-party governance is possible. In politics, as in war, every decision must be taken with an eye to the future — remembering that the next issue must be adjudicated by respected and respectful opponents.

The need to moderate our push to destroy the opposition runs counter to our natural inclination, felt in the heat of combat, to demonize or belittle the foe. In the short term, it seems to unite us against a common, hated enemy. But when you seek to delegitimize your foe, you’re actually inviting your own delegitimization. To be sure, it’s a precarious balance. It’s important to “fight” for one’s beliefs, but there is a point at which “fighting” erodes underlying foundations. In politics, at its hyperbolic end, the losing party is outlawed and its leaders jailed. And historically, the prevailing party, absent the moderating influence of a loyal opposition, soon runs off the rails.

At the best of times, what you’ll leave behind is a generational divide. If people forget the protagonists involved, what they’ll remember is what crushing the enemy, or being crushed, felt like. They’ll tell their children, and their children’s children, who to trust and who to malign. Soon, the Enlightenment ideals that harked in our democracy will wisp away, like the wind. The moment of apparent conquest can be the time of greatest vulnerability. Grasping for total victory can be our undoing.

Today, all this leaves us in a painful position. Almost irrationally, we are often transfixed by the white-hot zealotry of leaders who deal in absolutes. We mistake their passion for courage and their unwavering conviction for actual virtue. At such points, history tells us that we’re in murky territory. From the cults of personality that gripped the totalitarian politics of the twentieth century, to the hyper-partisanship of the twenty-first, we let untamed beasts loose.

It’s tempting to want “strength” in these tumultuous times, but it is exactly the moment we yearn for a strong, charismatic leader to lead us in crushing our opposition that we actually need a more humble approach, one that brings together a community of leaders who are willing to compromise.

This is the really hard part, for constituents have become hard-wired to punish any perceived weakness. The job of building that community can’t be done by a single leader, however much our presidential system means we’re always on the look out for the one. The job of repairing our union has to come from a group of leaders. They won’t look the same; they won’t always agree with one another; and, as with any coalition, it won’t make everyone happy at all points. That’s what compromise, and living in a functioning democracy, looks like. What will define this community of leaders is their stance towards those who may think a little different from themselves — who may have a different order of priorities and way of doing business. Don’t look out for these leaders as being the women and men with the loudest voices, or the most zealous convictions. Instead, they’ll be the ones willing to let go of the side of the pool, so that they can swim towards the middle.

It is a big ask of those who would step forward. There are few parades for the modest moderate and endless criticism from the frenzied fringes on both sides. Instead, these true heroes must take quiet satisfaction that their contributions will enable possibilities further in the future than most people look. And even when that future arrives, there will be loud complaints about the traffic from the vocal experts who rail on, oblivious to the selfless labor and thoughtful compromises that created the roads they take for granted.

Still, those leaders are among us. We cannot wait for them to rise one-by-one only to be pummeled down by a cacophony of partisanship. It is up to us to encourage, support, and celebrate those who will serve and lead. When they stand, we must stand with them. 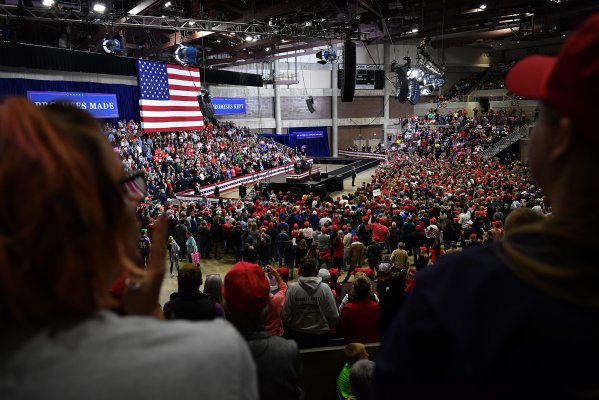 How to Talk to Each Other When There’s Little Common Ground
Next Up: Editor's Pick