Named the Statue of Unity, the giant new sculpture immortalizes Sardar Vallabhbhai Patel, an Indian independence leader and the country’s first deputy prime minister; it was inaugurated on what would have been his 143rd birthday. As Patel’s bronze-clad likeness gazed over the horizon at Kevadiya Colony, about 260 miles from the Bollywood capital of Mumbai, military aircraft flew overhead, scattering flower petals on the ground and tracing the colors of the Indian flag in plumes across the sky.

“This statue is an answer to all those who question India’s power and might,” Modi said in his address, before heading to take part in religious rites to mark the unveiling. “It is my honor to be able to dedicate this statue to the nation.”

But not everyone in the nation is thrilled by the gargantuan effigy, which took 33 months to build, at a cost of $400 million, in a public-private venture that was partially crowdfunded. Just hours before the unveiling, close to the site, crowds of farmers and members of tribal communities chanted slogans and tore down posters of the statue in protest against what they see a colossal waste of money.

‘They don’t have a past to invoke’

In fact, the Statue of Unity hasn’t generated much in the way of harmony since its conception was announced in October 2013 by Modi, who was then the chief minister of Gujarat and a prime ministerial candidate. Critics say that the sculpture is a crude attempt by Modi’s Hindu nationalist Bharatiya Janata Party (BJP) to rewrite political history. Its completion ahead of the highly anticipated 2019 general election is also likely to score big points with the right-wing Hindu voters who make up the BJP’s power base.

Patel is one of the legendary figures of Indian nationhood. When the sub-continent’s 584 princely states were given the choice of joining either Pakistan or India following the 1947 Partition, it was Patel who convinced more than 550 of them to join the latter. For that, he became known as the Iron Man of India.

He came from humble beginnings in the state of Gujarat—as does Modi, who rarely passes up on an opportunity to express admiration for his fellow Gujarati. The BJP-led coalition even declared Patel’s birthday to be National Unity Day just months after coming to power in 2014.

Mahatma Gandhi with Sardar Patel and Jawaharlal Nehru. 1947. Gandhi was the preeminent leader of the Indian independence movement in British-ruled India. Sardar Vallabhbhai Patel was an Indian statesman, a leader of the Indian National Congress and a founding father of the Republic of India. Universal History Archive-UIG/Getty Images.
Universal History Archive-UIG/Getty Images.

But there’s just one snag: Patel had nothing to do with the BJP. He was actually a member of the BJP’s great political rival, the center-left Indian National Congress (commonly called the Congress or the Congress Party).

Critics say that the BJP, which was founded in 1951, is trying to appropriate Patel’s legacy and aura because it cannot number any preeminent independence leaders among its past members.

“For a party that claims to do everything in the name of the nation, they don’t have a past to invoke,” Sucheta Mahajan, professor at the Center of Historical Studies at Jawaharlal Nehru University in New Delhi, tells TIME.

Even worse, the BJP does have a connection to the assassin of independence icon Mahatma Gandhi, who was slain in 1948. Gandhi’s killer, Nathuram Godse, had been a member of the Rashtriya Swayamsevak Sangh, the paramilitary Hindu organization regarded as the parent of the BJP.

Repeated requests for comment made to several BJP spokespersons for this article went unanswered. However, Modi has argued in the past that Patel was politically sidelined by both Congress and Jawaharlal Nehru, India’s first prime minister (whose great-grandson Rahul Gandhi happens to be Modi’s opponent in the upcoming election).

Congress refutes this. “The BJP is trying to build a narrative that Sardar Vallabhbhai Patel and Jawaharlal Nehru were always at loggerheads,” Priyanka Chaturvedi, a spokesperson for Congress, tells TIME. “In trying to politicize and usurp the legacies of our past leaders, the BJP is also making an attempt to demonize us.”

‘It’s a matter of shame’

Besides its symbolism, questions have also been asked about the physical statue itself. Larsen and Toubro, the construction company that built the effigy, has admitted that its bronze cladding came from China. While the cladding represents only nine percent of the statue, it has the potential to embarrass Modi, who has staked much on a “Make In India” initiative to encourage companies to manufacture locally. Photos circulating online earlier this year, showing Chinese workers at the site of the statue, haven’t helped.

“It is a matter of shame that ‘Made in China’ would be engraved behind this statue,” Rahul Gandhi, Congress president, said at a rally in September.

Opposition parties, led by the Congress, are bound to taunt Modi with this during campaigning for the 2019 elections, especially given India’s burgeoning unemployment.

“This is bound to come up since the atmosphere is very divisive and latching on to anything which is divisive has unfortunately become the motto of political parties in this country,” prominent political scientist Sudha Pai tells TIME.

Even as the wrangling over the Statue of Unity continues, a taller and possibly even more divisive sculpture is in the works off the coast of Mumbai. Scheduled for completion in 2021, it is of Chhatrapati Shivaji, a Hindu warrior king, revered for battling Muslim rulers.

It is an attempt to symbolize him as a Hindu resurgent leader against Islamic rule, more like a symbol of Hindu-Muslim conflict,” Mohan Guruswamy, president of Center For Policy Alternatives, a public policy organization, tells TIME.

Since taking office, the Modi-led government has taken steps to remove some reminders of the Muslim presence in India’s history. The Muslim names of many prominent cities and train stations have been swapped for Hindu alternatives, for instance. And the Taj Mahal—a Muslim mausoleum built by a 17th-century Mughal emperor—has been left out of a tourism brochure issued by the state government of Uttar Pradesh, where the world renowned monument is located.

For Pai, symbolism and appropriation have already gone too far. “Statues carry symbols and values with them and we should leave it out because it somehow divides the nation,” she says

For others, the symbolism of Indian might—and specifically Hindu might—has only just started. “Take note of the message we are sending out to the world with this statue,” a BJP supporter at the unveiling tells TIME. “Just the thought of it sends shivers down my spine.” 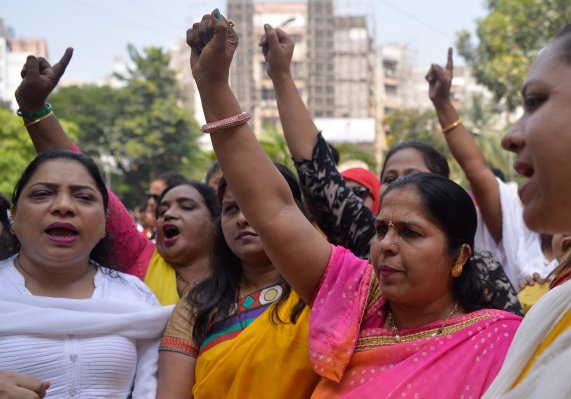