Guns Have Divided America. Here’s What Happens When 245 People Try to Meet in the Middle

Deborah Wallace and Cindy Chester live about 30 miles from each other in Maryland. They ride the same freeways, read the same billboards, dress for the same weather. To some extent they have even encountered the same trauma. But for all that, it’s not easy to locate their common ground.

Wallace teaches in a part of Baltimore where gun violence is so common that in the space of 15 months, seven of the students at her high school were shot dead. Atop a massage table during a sea cruise she had booked hoping to escape reality, “I just cried,” Wallace says. “The masseuse thought she hurt me.” The 63-year-old views guns as a plague that needs to be eradicated.

In suburban New Carrollton, Chester lives in regret that she did not have a gun at hand, and know how to use it, the day 10 years ago that her ex-­boyfriend shot her. She lost her right leg and her unborn child. “It could have changed my whole story,” says Chester, 31 and a “firm believer” in the Second Amendment. She wants other women to be empowered to take the action she could not.

Even though they may disagree on guns, their opinions are grounded in lived experience and expressed with a sincerity and respect often missing in the national debate. That was the most consistent takeaway from TIME’s project on guns, an under­taking that involved three cities and 245 people over five months. The artist JR assembled the mural on this week’s cover from separate photographs of every participant, each with a distinct view on firearms. They were situated in a tableau that evokes not only the spirit of debate associated with the Founding Fathers but something else as well—the unity that flows from a sense of shared enterprise. We saw the same thing in St. Louis; in Washington, D.C.; and in Dallas: We’re all in this together.

Owning a gun remains one of the oldest and in many places most cherished traditions in America, but it’s no longer as commonplace as it was 230 years ago. The right to “keep and bear arms” with a “well-regulated militia” was regarded as so central to the notion of liberty that it came second in the Bill of Rights only to the freedom to think and speak.

But when the topic is the Second Amendment, the exercise of the First Amendment lately amounts to talking past one another. The gun debate stands frozen in stalemate, advocates unable to agree even on the meaning of words. When one side appeals for “common­sense gun controls,” the other hears only “control.” When some say “law-abiding gun owners,” others only hear “gun.” How did we get here? Over time.

America was a rural nation for most of its history. And in many places, firearms remain tools—for sport, for securing food, for a bond to connect generations. In Lewisville, Texas, 10-year-old Cooper Buck spends many weekends hunting with her parents, something she has done since her grandfather gave her her first gun (it was pink) for Christmas when she was 5. “I really want to pass this down to my kids whenever I get older,” she says after being photo­graphed by JR while holding a gun in early September in Dallas. She hopes to show people across the country that her gun is not something to fear.

A firearm can be a beautiful thing, depending on the eye of the beholder. Wander the tables of a gun show and the combination of burnished walnut, tooled steel and exquisite balance might be fondly labeled artisanal by a city dweller. The craftsmanship displays tradition and care, including the solemn sort a parent brings to the instruction (often via an NRA safety course) of a youth in the responsible handling of a lethal weapon, a marker in the passage to adulthood.

But fewer and fewer Americans learn about firearms tramping in the woods. Most today live in a suburb, neither city nor country, and in many ways the culture of gun ownership toggles between the two. Rural culture often evokes a defiant individualism that draws on the mythology of the American frontier, and a resistance to regulation as righteous and absolutist as anything free-speech advocates marshal in defense of their own favorite amendment. Gun owners are often gun enthusiasts, and a majority of owners have more than one gun. Research shows that while there are more guns in America than there were 20 years ago, they are owned by a smaller share of the population. Roughly 40% of Americans live in a gun-owning household, but just 30% own guns, according to recent Pew Research Center and Gallup surveys. Other studies have put the percentage of those who personally own guns even lower, at about 22%. And only 4.4 % of Americans over 16 actually hunt.

The view from urban America is markedly ­different. In cities like St. Louis, which has lost a significant chunk of its population to the suburbs in recent decades and frequently has the highest murder rate in the country, not everyone experiences gun violence in equal measure. Black Americans are more likely to be shot than their white counterparts, and community leaders say much of the gun culture is tied to a lack of access to education, jobs and opportunity. “If we had better job opportunities, better mentors, better role models … then we wouldn’t see this as much,” says Emeara Burns, a 20-year-old college student and activist who grew up hearing gunshots in her St. Louis neighborhood.

Shootings are a common occurrence across the country. On an average day, six children are injured or killed in unintentional shootings, according to data from the Centers for Disease Control and Prevention (CDC). From 2012 to 2016, the last years for which data is available, an average of 35,000 ­Americans died from gun violence every year, according to the CDC. Nearly two-thirds are suicides. Homicides by gun, after declining from their peak in the 1990s, spiked 31% from 2014 to 2016, the CDC found. What more the CDC might have found we cannot say; Congress voted in 1996 to limit the scope of research into gun deaths and injuries by the country’s premier health agency.

Similarly, there is wide disagreement over how to count mass shootings in America. The biggest point of contention is the minimum number of victims that qualifies as “mass.” There is, however, no question that the maximum number keeps climbing. The rec­ord for deadliest shooting in U.S. history having been set at 49 at Orlando’s Pulse nightclub on June 12, 2016, stood for just over a year. It was eclipsed by the slaughter of 58 people at a Las Vegas music festival on Oct. 1, 2017.

School shootings, astonishing a generation ago, have taken on the element of routine—both in the frequency with which they happen and in the public mind. “Active shooter” drills are now familiar to many kindergartners. And parents in suburbs see their children off in the morning with the pit in their stomach parents in inner cities have felt for decades.

At the start of the school year, Beth Poquette Drews asked her music class at a Dallas middle school to create a “respect agreement” outlining how they would treat one another for the rest of the school year. “Usually the answers we receive are things like ‘Don’t interrupt,’ ‘Keep your hands to yourself,’ ‘Listen to each other’—the typical things you would expect a child to say,” she says. “But this year the first one that came up on the list was ‘Don’t shoot each other.’”

The school shootings also underscore the utter paralysis in our politics. In a Gallup poll taken in March, 67% of Americans said they wanted stricter laws on firearms sales, the highest percentage for any Gallup poll since 1993. A Quinnipiac survey found almost every American, 97%, in support of universal background checks. Yet Congress hasn’t passed the ­Manchin-Toomey measure to expand background checks, first introduced after 20 first-graders were killed at Sandy Hook Elementary School in 2012.

“It’s hard for people to settle for the modest progress or the modest change,” says Senator Pat Toomey, a Pennsylvania Republican. Attention tends to gather instead at one extreme or the other, where maximalist positions generate enthusiasm among the confidently certain. In Texas, state representative Jonathan Stickland, a Republican, wants to remove permit requirements on gun owners in an approach known as “constitutional carry.” And in Northern California, Representative Eric Swalwell, a Democrat, stokes gun owners’ worst fears by proposing that they be required to sell their military-style semiautomatic assault rifles to the government, in a “mandatory buyback.”

As Colin Goddard, 33, a survivor of the 2007 ­Virginia Tech shooting, puts it, “Guns are a symbol for a lot of people, and they mean different things. I think the symbol to some Americans is of tradition, of family, of history. And others I think view it as a symbol of death, fear, destruction. And when you have such different values and feelings associated with one symbol like that, I think it helps explain why this issue and guns is so difficult to talk about.”

We divide ourselves. We cluster around the warmth of shared opinions, separate ourselves by disposition, neighborhood or, especially, news feed. Joe Enderby, a 36-year-old who owns a bird-­hunting club in the Dallas area, calls himself a strong supporter of the Second Amendment. But he keeps mostly to himself his parallel thought, “There is nothing to fear in gun regulation,” because he knows what the reaction will be. “In 2018, the middle is a very difficult place to be,” he says. “You have to be on polar-opposite sides, and I think the polarities are the loudest.”

Money also matters, and not just in rewarding or punishing candidates. Firearms are a $17 billion industry, and paranoia can juice demand. Gun and ammo sales soared when Barack Obama was President, as gun owners stockpiled whatever rumor said was about to be outlawed by the feds. (Nothing was.) After Trump was elected, helped along by $30 million from the NRA, sales slowed and have not fully recovered. In March, Remington filed for bankruptcy. TIME repeatedly invited the NRA to participate in this project, but ultimately the organization declined.

The same polarizing political system shapes the side advocating for limits on guns. In addition to their own stere­otypes and intolerances, they must lug into the public arena the burden of justifying regulation. In other words, differentiating between the impulse to do something vs. doing something likely to achieve the desired results—a challenge that remains when the welling emotions summoned by a grieving parent have ebbed. There are reasons the status quo is a standoff.

Yet as we learned from listening to many of the voices in our project, two clear themes—responsibility and the need for extraordinary care around lethal force—are common to both the ethos of gun ownership and the stated goals of those who seek controls. Which commends them as logical starting points for a conversation that takes place not through elected surrogates, and not online, but face to face, where Americans still tend to get along pretty well.

“Guns aren’t going anywhere,” says Jamison Sweet, 47, a gun owner in St. Louis who served in the Marine Corps for 15 years. “We need to come together to just listen.” That’s the first step in bridging the divide, says Holly Sullivan, a 36-year-old single mother and firearms instructor who lives in Connecticut, about seven miles from Sandy Hook Elementary School. “If we could educate on who we are and what we believe,” she says, “I think we could find common ground.” 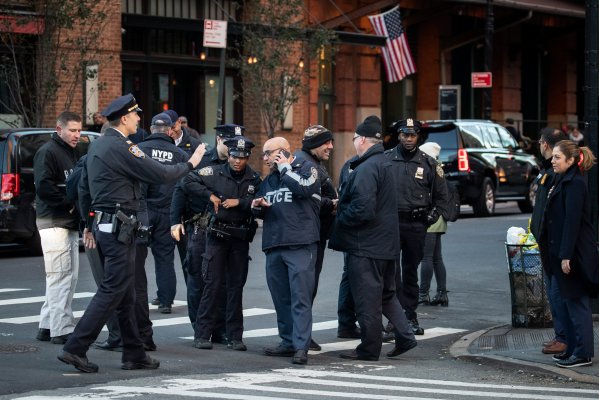 Biden, De Niro Are Latest Targets of Package Bombs
Next Up: Editor's Pick