How Europe Turned Compassion Into a Crime

Welcoming cards and posters made by local children await Syrian refugees at an undisclosed location on December 14, 2015 in Belfast, Northern Ireland.
Charles McQuillan—Getty Images
Ideas
By Maria Serrano
Serrano is a Senior Campaigner at Amnesty International.

One Sunday morning last February, in a church nestled at the foot of the snow-capped Jura mountains in a small Swiss town, Pastor Norbert Valley’s service was interrupted by the arrival of two policemen. Worshippers watched aghast as the minister was led away for questioning at the police station.

In August, he was charged with “facilitation of irregular stay” under Article 116 of the Swiss Foreigners Law.

His “crime” was to offer occasional food and shelter to a homeless man from Togo who had his asylum application rejected. Valley was ordered by the Public Prosecutor of Neuchâtel to pay a fine of 1,000 Swiss Francs ($1000). He refused.

Pastor Valley does not deny helping the man, but he disagrees with the principle that helping a person in distress could be a crime. “As a Christian, the principle of loving my neighbor leads my way of life”, he says.

On Thursday, a Swiss Public Prosecutor will decide whether to drop the charges against the pastor, or to maintain them and issue an indictment that would force Pastor Valley into the dock.

Swiss pastor Norbert Valley was charged with “facilitation of irregular stay” under Article 116 of the Swiss Foreigners Law in August 2018.
Amnesty International

Valley’s case is not an isolated one. It is just the latest in a series of cases across Europe that have involved authorities using immigration and anti-smuggling laws to criminalize people helping refugees and asylum seekers.

In October, we also saw the start of the trial in the U.K. of 15 people — the so-called Stansted 15 — who face possible life sentences for their non-violent action in stopping the departure of a deportation charter flight.

In France, an article of immigration law that allows up to five years’ imprisonment for anyone who “attempts to facilitate the illegal entry, movement or residence of a foreigner” has been repeatedly used to target those with a sense of empathy.

One such good Samaritan, 73-year-old Martine Landry, has been repeatedly dragged through the courts for assisting two 15-year-old Guinean asylum seekers. She helped them get to a police station so they could be registered and cared for as minors, soon after they crossed the border from Italy. Despite being acquitted in July, she will have to face trial again after the Public Prosecutor decided to appeal the decision.

A recent ruling by France’s Constitutional Council acknowledged that the “crime of solidarity” was not in line with the French Constitution and declared that the principle of “fraternité” protects the freedom to help others for humanitarian purposes, regardless of immigration status. Despite this, French authorities have continued targeting activists helping refugees and migrants left homeless in northern France after the 2016 closure of the informal “Jungle” camp in Calais. In September, activist Loan Torondel was charged with defamation for tweeting a photograph of policemen standing over one of the many people systematically evicted from informal camps in Calais.

In Greece, three professional firefighters and two volunteers who had worked saving lives at the height of the refugee crisis were only recently cleared of charges “attempted smuggling” of migrants into the country.

Elsewhere in the Mediterranean, non-governmental rescue ships and their crews have been repeatedly targeted through numerous legal cases and the imposition of bureaucratic restrictions to their operations.

In April the Open Arms rescue ship, a Spanish NGO vessel, was impounded by the Public Prosecutor of Catania after the crew refused to hand over to the Libyan Coast Guard 218 people rescued at sea. Although the boat was released, investigations against crew members continue.

The Iuventa, a German NGO vessel, remains impounded by Italian authorities. Investigations against crew members have been opened on the grounds that the ship was “aiding irregular immigration” into Italy.

Earlier this month, apparently under pressure from the Italian authorities, the Aquarius ship which has reportedly rescued more than 30,000 people over the last two years had its registration withdrawn by Panamanian authorities.

With a rise in the number of deaths of people trying to reach Europe across the Mediterranean, forcing essential rescue boats to leave the seas may well have contributed to the deaths of more than 1,000 people in the Central Mediterranean this year.

In Hungary, the mere provision of aid to refugees and migrants has become a criminal offence with penalties of up to one year in prison. A law passed this year criminalizes a wide range of activities such as the preparation, distribution or commissioning of ‘information materials’ related to migration and providing legal and other support to asylum seekers.

On Oct. 15, Amnesty International became the second NGO to challenge in court the constitutionality of this law.

On Thursday, Norbert Valley will find out whether he has to pay a fine. But the important part of this story is not the 1,000 Euros.

His case – like others where acts of solidarity have been criminalized – is not just about the prosecution of an individual. It is about the attempt to make Europe a place where NGOs are attacked and people showing compassion are stigmatized.

The attempt is not working. Rather than serving to discourage and intimidate, these absurd efforts to clamp down on basic human decency are having the opposite effect. Through their courage and persistence, Swiss pastors, French pensioners, Spanish firemen and countless others are standing in defiance and showing that the human spirit will not be so easily extinguished. 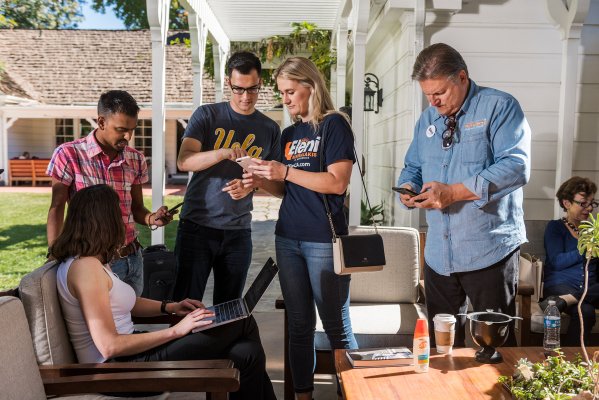 Why Politicians Are Texting You So Much — And It’s Only the Beginning
Next Up: Editor's Pick