Celebrities are hitting back at Megyn Kelly for saying that she doesn’t understand why blackface Halloween costumes are racist.

Kelly sparked near-immediate online backlash on Tuesday morning with comments she made during a roundtable discussion on offensive costumes on her talk show Megyn Kelly Today. She apologized for the remarks following the segment.

She later apologized in an e-mail to colleagues, according to the Associated Press. “I realize now that such behavior is indeed wrong, and I am sorry. The history of blackface in our culture is abhorrent; the wounds too deep,” Kelly wrote.

See the e-mail below.

Kelly had specifically spoken out in defense of Real Housewives of New York star Luann de Lesseps, who came under fire for appearing to darken her skin to dress up as Diana Ross last year. “She dressed as Diana Ross and she made her skin look darker than it really is,” Kelly said. “People said that was racist! And I don’t know, like, I thought, like, ‘Who doesn’t love Diana Ross?’ She wants to look like Diana Ross for one day. I don’t know how that got racist on Halloween.”

Celebrities including Padma Lakshmi, W. Kamau Bell, and Patton Oswalt were quick to criticize Kelly for her remarks, with Oswalt noting that blackface was certainly not considered socially acceptable when he and Kelly were growing up.

“Dear @megynkelly — you and I are approximately the same age,” he tweeted. “Blackface was NOT okay when we were kids. Take it from a big-hearted boy who just wanted to show his love for Nipsey Russell on the worst Halloween of my life.”

Kelly previously caught similar flak for saying that both Santa Claus and Jesus Christ were verifiably white on a 2013 episode of her Fox News show, The Kelly File.

See some more reactions to Kelly’s blackface comments below.

A spokesperson for Kelly did not respond immediately to TIME’s request for comment. 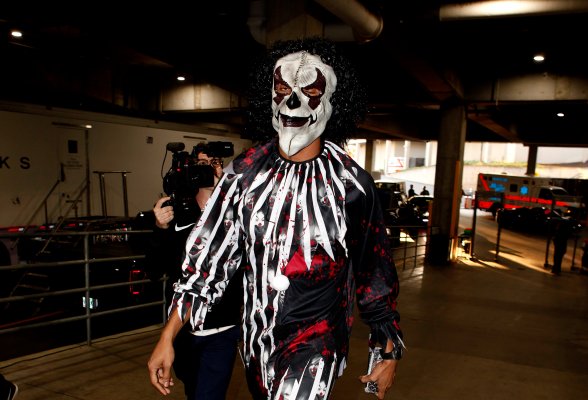 Basketball Team Does Not Come to Play With Over-the-Top Halloween Costumes
Next Up: Editor's Pick