Bought Mega Millions Tickets? Here’s What You Could Have Made If You Invested That Money Instead

But that leaves plenty of lottery losers who won’t see a return on their Mega Millions investment. That’s money, many would argue, that could have been better invested.

Americans spend a lot of money playing the lottery. Approximately 370 million lottery tickets were sold between Saturday and Tuesday before the Mega Millions drawing, according to a lottery official. The U.S. generated nearly $73 billion in lottery sales in 2016 and CNN reports that in 2017, U.S. residents spent about $73.5 billion on tickets. The average American spends about $223.04 per year on lottery tickets, loan marketplace LendEDU found in a report that calculated its average by dividing the 2016 lottery revenue by the U.S. population (325.7 million).

How much a person earns from the lottery depends on many factors, including the odds of the lottery and the number of tickets they bought. While a $2 lottery ticket could represent the chance for an instantaneous life of luxury, the chances of winning millions in a jackpot are pretty low. In fact, lottery officials in recent years changed the odds to lessen the chance of winning, leading to higher and higher jackpots like this Mega Millions.

But could investing the money that normally goes toward lottery tickets still make a person rich?

According to some financial experts, such a scenario is possible. Although it’s unlikely to make anyone a multi-millionaire, investing lottery ticket funds could yield tens to hundreds of thousands of dollars later in life. Jeanne Fisher, a senior financial advisor at ARGI and CFP Board ambassador, says putting the $223.04 a year that would normally go toward a lottery ticket into an S&P 500 index fund could give a person about $259,000 at the end of 50 years, assuming they get a 10% return, which has historically been the market average. Invest that money into a 30-year treasury note and earn back about $86,145 at the end of 50 years.

A person can even put the money into a CD, a savings account with an interest rate where you can deposit money for a predetermined amount of time, which is statistically much more likely to bring in more money than a lottery ticket, says Bill Wilson, a Wall Street veteran who spent more than 30 years in the financial services industry. If you put $18.59, or the average amount people spend monthly on lottery tickets, into a CD that pays a 2% return, you could earn about $1,174 in five years, Wilson says.

Of course, the buzz around the $1.6 billion Mega Millions jackpot led plenty of people to buy tickets even when they normally would use their money for other things. According to a 2016 Gallup poll, about half of Americans play lotteries in their state. Lottery tickets are also most frequently purchased among lower-income households. Households at the lowest-income bracket spend about $412 a year on lottery tickets, which is about four times the amount that highest-earning households say they spend, a 2018 Bankrate report finds.

Fisher said most Americans probably spend somewhere around $10 a year on lottery tickets when jackpots get bigger.

“The reason the lottery gets so much excitement is because the average American is willing to risk $2 for the chance of hundreds of millions of dollars,” she says. “This is a game, even if you know the chances of winning aren’t that high.”

Wilson concurs. A person can absolutely put their money in a diversified portfolio and earn an average of 7% on it every year, he says. “But there’s a degree of entertainment in purchasing a lottery ticket. It’s entertaining.”

The original version of this story misstated the name of the company ARGI. It is ARGI, not Agri. 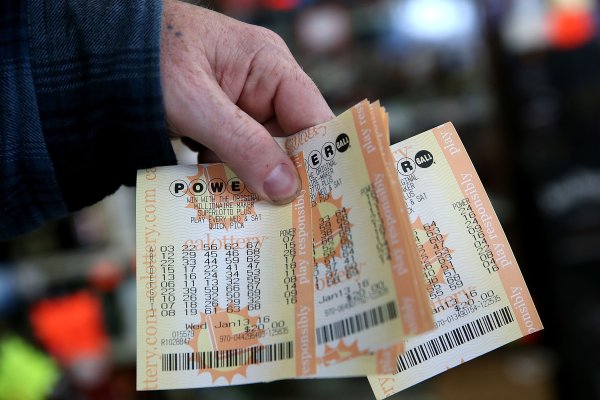 Here Are the Best Ways to Protect Yourself in an Office Lottery Pool
Next Up: Editor's Pick