While Mnuchin canceled his attendance at an investment conference in the Saudi capital this week, he still traveled to Riyadh for a meeting with Crown Prince Mohammed bin Salman, who is widely suspected of playing a role in Khashoggi’s death.

Mnuchin has not posted any pictures or statements from the meeting, but Saudi Arabia’s foreign ministry tweeted a photo of Mnuchin and the crown prince, writing that their meeting “stresses the importance of the Saudi-US strategic partnership, where it holds an important role in the future in line with the Kingdom’s #Vision2030.”A Treasury Department spokesman said the two discussed economic ties, counterterrorism, and the investigation into Khashoggi’s death, according to the Times.

Khashoggi vanished after he entered the Saudi Arabian consulate in Istanbul on October 2 to retrieve marriage documents. After weeks of denying knowledge of Khashoggi’s whereabouts, Riyadh admitted that he had been killed in the consulate, but offered conflicting accounts as to how he died. Outcry at the shifting plot line continued to grow after Saudi state media claimed on Saturday that Khashoggi was strangled to death amid a fistfight with 15 Saudi operatives.

Mnuchin’s visit may indicate that the White House is eager to normalize relations with Saudi Arabia. Despite mounting evidence implicating Mohammed bin Salman’s entourage and pressure from Republicans, President Donald Trump has been reluctant to blame the 33-year-old crown prince. Trump has also refused to freeze the $110 billion arms deal he announced with Saudi Arabia, and emphasized that Khashoggi, while a resident of the U.S., was not an American citizen.

While Saudi Arabia’s foreign minister said Tuesday its investigation will produce the truth about what happened to Khashoggi, Turkey promised to publicize the facts of its own probe. 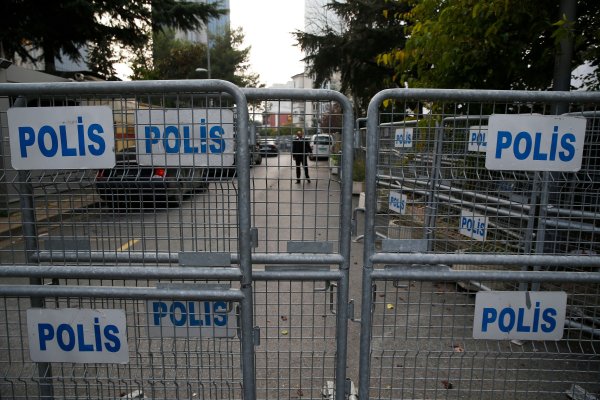