President Trump Threatened to Turn Back Caravan Migrants If They Don't Claim Asylum in Mexico. That's Not Legal

President Donald Trump has said the Central American migrants traveling via caravan should seek asylum in Mexico – and threatened that they will be turned away if they reach the U.S. border.

“People have to apply for asylum in Mexico first, and if they fail to do that, the U.S. will turn them away. The courts are asking the U.S. to do things that are not doable!” he tweeted Sunday.

But following through on that threat could violate international law, experts say.

As a signatory of the 1951 Refugee Convention and 1967 Protocol Relating to the Status of Refugees, Mexico is obligated to protect people who are outside of their country and afraid to return due to a well-founded fear of persecution based on religion, race, nationality or membership to a particular social or political group.

The United States is also a signatory. And while Mexico is required to offer protection for refugees under international law, migrants have no obligation to request it there. If migrants like those traveling in the caravan that began in Honduras want to seek asylum in the United States, they have the right to try, says Doris Meissner, the director of the U.S. Immigration Policy Program at the Migration Policy Institute

“We do have an obligation as a country under international law to allow people to apply for protection, even if they have come through another country,” Meissner tells TIME.

The exception is if there is a “safe third country” agreement in place.

Under U.S. immigration law, the the United States can deny asylum if a person can be returned to a country where their life or freedom is not in danger, but only if the U.S. has entered into a bilateral or multilateral agreement that codifies the arrangement.

The U.S. and Canada have such an agreement. It says that people must seek refugee status in the first country they arrive in—either the U.S. or Canada—but there are some exceptions for cases of family reunification.

No such agreement exists with Mexico. The Trump Administration began floating a proposal for one last spring, when another caravan of migrants approached the U.S.-Mexico border. Mexico’s Foreign Minister Louis Videgaray reportedly rejected calls for such an agreement when he met with Homeland Security Secretary Kirstjen Nielsen in July.

Additionally, some argue that Mexico would not meet the standards for such a designation. For one, given high rates of crime, there are credible safety concerns. A survey conducted by Amnesty International found that migrants often are not told about their rights as refugees. And although more attention has been paid to the situation in the U.S., Mexico has been receiving an increased number of asylum claims in recent years.

Those increases have led to backlogs, says Madeleine Tenman, a Mexico researcher for Amnesty International, meaning a process that is supposed to take 45 days can take several months or even a year to get resolved.

“There is no way that the United States could outsource its responsibility to Mexico,” says Tenman.

Over 1,000 of the Central American migrants traveling toward the U.S. border via a massive caravan have already requested asylum in Mexico.

Since the caravan of migrants, most of whom are from the Northern Triangle countries of El Salvador, Guatemala and Honduras, reached Mexico late last week, its numbers have reportedly swollen to include more than 7,000 people.

The United Nations High Commissioner for Refugees (UNHCR) is currently on the ground in Mexico assisting authorities in ensuring that migrants have access to the country’s asylum system.

It is likely that many members of the caravan will not reach the U.S.-Mexico border. A smaller caravan that traversed the country last spring was 1,200-strong at its peak, but dwindled to around 200 once migrants reached the United States.

While some members of the current caravan had already chosen to seek asylum in Mexico or return home and end the arduous journey, others have told journalists on the ground and UNHCR workers that they wish to continue traveling north.

Once they arrive, the U.S. could be taking a legal risk if Trumps orders to bar them from the country. 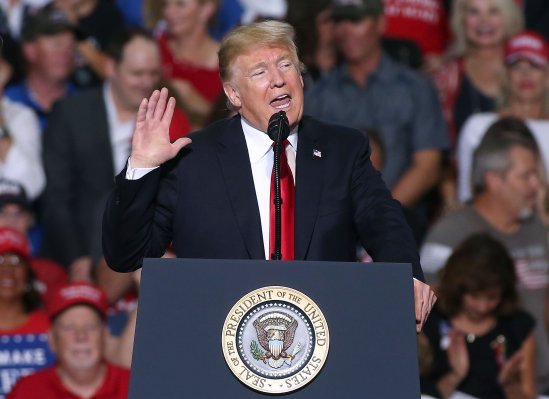 President Trump Calls Migrant Caravan a 'Disgrace to the Democratic Party'
Next Up: Editor's Pick