How Americans Lost Their National Identity

Ideas
By Yoram Hazony
Hazony is the author of The Virtue of Nationalism.

Today, we hear the sloppy, misconceived term “white nationalism” more often than we hear about American nationalism. And whenever the term nationalism is raised, it is often quickly conflated with racism. For instance, at an Oct. 23 rally, President Donald Trump declared that he was a nationalist. He used the term in contrast with globalist, who he called “a person that wants the globe to do well, frankly not caring about our country so much.” Many commentators quickly deplored the President’s statement as a dog-whistle admission that he truly supports “white nationalism,” once again suppressing legitimate debate over the value of American nationalism, while insisting that racialist “white nationalism” is what we really should be talking about.

This is a problem. Because it’s American nationalism that the U.S. needs right now. Never in our lifetimes have we seen America’s various tribes so divided, so intolerant of one another, so quick to delegitimize and even threaten violence. The mutual loyalty that has bound Americans together as a nation seems like it is disappearing. The bitter argument over ongoing large-scale immigration is only a proxy for this deeper issue: Can Americans ever unite again around a shared national story? Can they ever see themselves as brothers again?

“White nationalism” is used to describe the small fringe of Americans who believe nationality is defined by the color of one’s skin. These groups promote the kind of loosely Darwinian thinking that motivated German Nazism: What’s decisive, they say, is the “quality” of one’s genes. So people should obsess about skin color and the shape of one’s facial features — traits that supposedly tell you who’s got the right genetic make-up.

Most Americans find these attempts to reduce nationality to race repugnant. This is because race politics brought about the murder of millions in Europe, while in America it produced slavery, civil war and a legacy of domestic unease — and occasional violence — that hasn’t died down to this day.

But “white nationalism” is also misconceived because “whites” are not a nation: We’re familiar with the English, Dutch, French and Polish nations. They’re recognized by a common cultural inheritance, especially a distinctive language and religion, and by the bonds of mutual loyalty that come of centuries of joint struggle. The Polish nation, for example, is known by its Polish language, Catholicism and a long, painful history of striving for independence from Germany and Russia. By contrast, no “white” nation is found in any history book. There is no distinctive “white” language, religion or cultural inheritance. The idea that “whites” are a nation is just so much make-believe. Instead of deepening Americans’ pride in, and attachment to, the remarkable Anglo-American political and religious traditions that brought the United States into being, “white nationalists” conduct their parades under bizarre new flags they have invented for themselves: They prefer to replace the authentic American nationalist tradition with a concocted new racial identity that is just as much a break with the American past as the neo-Marxist revolution being proposed by the Left.

But if the American nation is not a race, what is it? It’s now often said that the American nation is actually an “idea” — the idea that all men are created equal, for example, or that the powers of government derive from consent, as suggested in the Declaration of Independence. But that isn’t any more plausible than the racism of the alt-right. After all, if America is a handful of abstract principles drawn from 18th century Enlightenment philosophy, what are we to make of Americans who dissent from this philosophy — on biblical or Aristotelian, Burkean or Humean grounds? Does philosophical disagreement mean you’re not an American? Of course not. Similarly, if a people in a foreign land pledges allegiance to the ideals of the Declaration, does that make them Americans? No, it doesn’t.

Most Americans aren’t attracted to white-racist politics or to the racialist identity politics of the neo-Marxist left. But the claim that America is just “an idea” hasn’t gotten much traction either. Most Americans remain attached to a more traditional way of understanding their nation — one that isn’t clearly articulated very often these days.

Not long ago, Americans still possessed an intuitive understanding of nationhood whose source was in the Bible. The King James Bible uses the terms “nation” and “people” thousands of times. In reading Scripture, Americans — like their English, Dutch and Scottish cousins — encountered God promising Abraham, “I will make of thee a great nation” (Genesis 12.2); and telling Moses, “Ye shall be unto me a kingdom of priests and a holy nation” (Exodus 19.6). Ancient Israel was, for generations of Bible-literate Americans, the prototype of a “nation.”

In the Bible, “nations” aren’t defined by race. The Bible reports that many Egyptians joined the Israelites and stood with them at Mt. Sinai; and that King David was descended from Ruth, a Moabite who joined herself to Israel, saying “Your people is my people, and your God my God” (Ruth 1.16). In the Bible, nations adopt individuals and even entire tribes.

While biblical nations aren’t defined by race, they are also not merely “an idea.” Biblical Israel consists of a diversity of tribes, who are nonetheless bound to one another by language and law, and a mutual loyalty arising from facing adversity together in the past. Notice that when Ruth joins herself to Israel, she embraces both the Jewish people and its God. It’s not just the “idea” of the one God, then, that makes her an Israelite. She binds herself to the actual families and tribes of this nation, their language and their ways of doing things: “Your people is my people.”

American nationalists used to think of their nation in just this way: Neither as a race, nor as an abstract “idea” — but rather as a diversity of tribes sharing a heritage and a mutual loyalty born of a joint history. The original American states, while internally diverse, nonetheless largely shared the English language, Protestant religion and the common law, and had fought Britain together. The nation reflected in these characteristics was so strong that Americans were gradually able to adopt other “tribes” into the mix: Catholics, Jews and — with time — the African-Americans who had lived through the evils of enslavement and segregation.

But American nationalists sought to counterbalance increasing diversity with a carefully protected common cultural inheritance: New territories were admitted as American states only once they had an English-speaking majority and adopted the common law. The eradication of slavery in the South and polygamy among the Mormons was likewise the result of a common cultural inheritance, descended from English Puritanism, which Americans insisted on maintaining even at the price of coercion.

As Americans have stopped reading the Bible, they have also lost an intuitive sense of what a “nation” is, and of what must be done to maintain it. At a time when large-scale immigration is at the forefront of U.S. politics, a biblically-rooted American nationalism — one that recognizes the nation as a diversity of tribes bound together by a common heritage and mutual loyalty — is sorely lacking from American public debate. 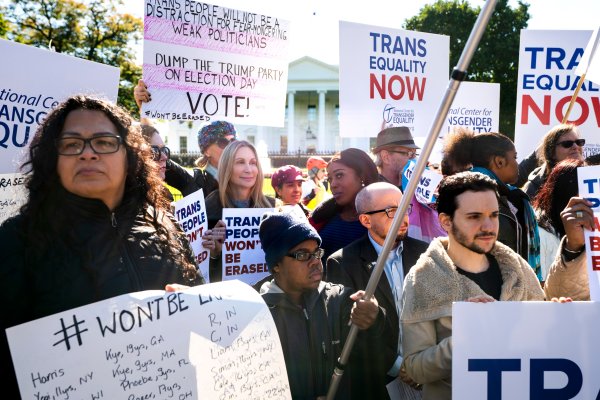 The Trump Administration Wants to Define a Person's Sex at Birth. It's Just Not That Simple
Next Up: Editor's Pick