President Trump Is Making Baseless Claims About the Migrant Caravan. Here Are the Facts

For more than 15 years, nonprofit groups have helped hundreds of asylum-seeking migrants journey through Central America to the United States, traveling together in a caravan to make the journey safer and their plight more visible. Thousands of Central American migrants currently walking to the U.S. border are doing the same, fleeing deadly violence on a trek that has drawn international focus.

As many as 7,000 migrants, according to one local estimate, have now joined the caravan that started on Oct. 13 in Honduras, many wearing flip flops and carrying their children on a journey that will be at least 1,500 miles long, depending on which part of the U.S. border they reach.

President Donald Trump — who has long critiqued U.S. immigration policies and denigrated immigrants since the start of his presidential campaign — has made numerous baseless claims about the caravan in recent weeks, spreading alarm and touting it as a “Great Midterm issue for Republicans!” Trump has claimed, without evidence, that the group included “criminals and unknown Middle Easterners” and falsely suggested that Democrats funded the caravan. He also blamed Democrats for the current immigration laws, though Republicans currently control both chambers of Congress and the White House.

“I have alerted Border Patrol and Military that this is a National Emerg[enc]y,” Trump tweeted early Monday, threatening to cut off foreign aid to Guatemala, Honduras and El Salvador for not “stopping people from leaving their country and coming illegally to the U.S.”

But videos and reporting from journalists traveling with the caravan of migrants show weary families making an arduous journey because of violence or lack of opportunity in their home countries, and no evidence that there are “unknown Middle Easterners” among the group.

“The migrants are ordinary people from Central America. They’re joining the caravans because the migration routes through Mexico are perilous for them and highly expensive,” says Elizabeth Oglesby, an associate professor of Latin American studies at the University of Arizona, who has studied Central America and human rights issues. “The more that the border has become militarized between the U.S. and Mexico, the more perilous and the more expensive the journey has become for Central Americans. So that’s why we see people coming together in the caravans.”

She says the caravan, which is larger than many of its annual predecessors, has grown because of how word spread on social media and because of worsening conditions in Honduras, where the murder rate is among the highest in the world and where the government has cracked down on political protesters following last year’s disputed presidential election.

Oglesby says just a fraction of migrants who begin the trek make it to a U.S. point of entry each year, as many turn back or peel off if they can find work or safety in Mexico instead.

While no specific group has said it’s responsible for organizing the current caravan, Pueblo Sin Fronteras, founded in 2010, has led asylum-seeking migrants through Central America for more than 15 years, most recently in April — another caravan that drew ire from Trump. The group aims to “provide shelter and safety to migrants and refugees in transit, accompany them in their journey, and together demand respect for our human rights.” Some Pueblo Sin Fronteras leaders and organizers are involved in the current caravan.

Trump has lashed out at the caravan as an example of illegal immigration, threatening to deploy U.S. military force to “close our Southern border” and stop what he has described as a crisis. But illegal border crossings have been declining overall for more than a decade, though the number of border apprehensions fluctuates month-to-month. And under U.S. law, it is legal to petition for asylum at the border, though the process may be lengthy and ultimately unsuccessful.

“These migrant caravans are not a border crisis,” Oglesby says. “People are doing this openly and visibly, and they plan to show up at the U.S. port of entry and petition for political asylum, and that is exactly how our laws are supposed to function. The crisis comes about when U.S. border officials discourage people from political asylum, leave them on the bridges or threaten them that if they go forward with a political asylum claim, they might lose their children.” 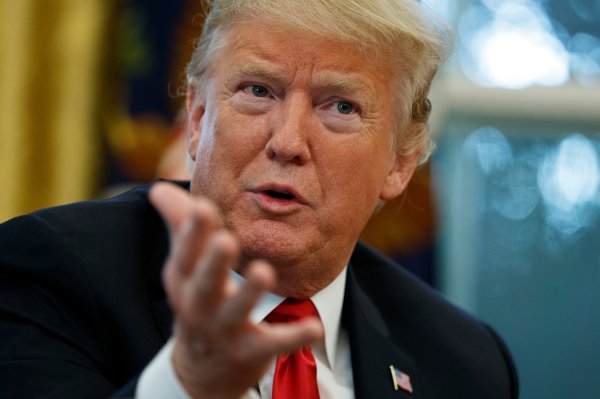 Donald Trump Didn't Really Win 52% of White Women in 2016
Next Up: Editor's Pick