Lining up on the rocky bank of the Suchiate river, which runs along Mexico’s southern border with Guatemala, a thronging crowd from the migrant caravan shouted to their companions squatting on the international bridge. “Venganse,” they chanted, come on over. Minutes later, groups from the bridge poured down the hill to jump on rafts made with tires and crossed into Mexico. No police stopped them.

With large numbers making it over the river into Mexico by late Saturday, participants from the caravan of Hondurans and other Central Americans settled temporarily in the plaza of this border city. Some lay exhausted, mothers curled up asleep with children, resting before they would continue their march on Sunday.

But others were in an upbeat mood, dancing and singing. A Mexican federal police operation to stop them on Friday, which had been applauded by U.S. President Donald Trump, had failed to halt their advance. “We are going to stay together, we won’t be broken,” said Edwin Rosas, a 31-year-old-builder from Progreso, Honduras, his shirt off in the humid evening. “We will keep going all the way.”

The caravan of an estimated 3,000 refugees and migrants, mostly without papers, first set out from the Honduran city of San Pedro Sula on Oct. 13, with the intention of heading through Guatemala and Mexico to the United States. As it pushes onwards, defying borders and growing in number, it has shaken governments through Central and North America.

Trump, who has long drawn political support from a hard anti-migrant stance, has threatened to cut off aid to various countries and to shut down the U.S. southern border. Mexican President Enrique Pena Nieto gave a TV address saying Mexico wouldn’t permit “entry into its territory that was irregular or violent.” Guatemala closed a border post with Honduras.

Yet despite these warnings, the caravan not only presses on but inspires more people to follow it from behind. Here in Ciudad Hidalgo there appeared to be thousands from the caravan by Saturday night, while there were more over the border in Tecun Uman, another contingent was heading through central Guatemala, and yet more were still leaving Honduras.

Families of immigrants rest for the night in a community gym in Chiquimula, Guatemala, on Oct. 16.
John Moore—Getty Images

“So many people are joining the march because they are so desperate,” said Danira Reyes, 38, a chef from the city of La Ceiba, who hoped to reach Houston, Texas. “I just want to be able to provide for my children, and I can’t do that at home.” Reyes described how she ate food handed out by families and charities along the way. She left her two teenage children at home. However, many small children are on the march and have joined their parents sleeping in parks, crossing the river, and even braving tear gas during a confrontation with Mexican federal police on Friday.

This grouping of migrants is the largest yet in a series of caravans travelling through Mexico in recent years. The first was organized in 2011, explained Ruben Figueroa, an activist from the Meso-American Migrant Movement supporting the caravan. In that time, there was a wave of mass kidnappings of Central Americans heading through Mexico so migrants traveled together for strength in numbers. This led to caravans being organized every Easter and steadily gaining popularity. “The migrants like the caravans because they work. They stop criminals or police harassing them,” Figueroa said. “So they get bigger and bigger.”

In April this year, more than 1,000 migrants and refugees joined a caravan heading through Mexico, leading to harsh criticisms from Trump. Shortly afterward, the White House announced a hardening of policies against undocumented migrants.

While most of the previous caravans involved Central Americans who were already in Mexico, the current one began in Honduras itself. It was first organized by local activists on social media. However, some TV stations reported on it, spreading the word to a much larger audience. Many on the caravan describe seeing the coverage on TV and deciding to immediately pack their bags and go. “People reacted to it because they are at breaking point,” said Orlin Castro, a TV reporter in the Honduran city of San Pedro Sula, who covered it. “This is the worst moment ever for my country.”

Honduras has suffered chronically high levels of violence for several years as street gangs and drug cartels fight for territory. Many on the caravan describe how they have suffered from these groups. Nelson Uribe, 20, told TIME how gangsters murdered his brother and then threatened him for being a witness in the city of Comayagua. “I was hiding in my house, terrified to go out. The caravan gave me a chance to leave,” he said. However, others cite poverty and hunger, especially following recent price hikes. “We just can’t afford to live. It was a question of leaving or slowly starving to death,” said Orisa Fernandez, 40.

The caravan doesn’t have any single leader but various activists are involved. After it crossed into Mexico, an international group called Sin Fronteras (Without Borders) has been helping it organize. While the Mexican federal police stopped the caravan going over the border bridge, they stood aside as people went over the river. However, the Mexican Interior Ministry issued a news release late Saturday saying that those who crossed the river illegally could be detained and deported.

Honduran migrants play with plastic bags on the bridge that connects Mexico and Guatemala in Ciudad Hidalgo, Mexico, on Oct. 19.
Ueslei Marcelino—Reuters

Now, Mexico’s Peña Nieto, who finishes his term on Dec. 1., has a dilemma. If his authorities harshly crack down on the caravan as it heads through the country, this could provoke a backlash from human rights defenders and others. But if they let the caravan continue, this will likely provoke outrage from Washington — and Trump in particular, who has threatened to scrap a newly-forged trade deal with Mexico if it isn’t stopped.

Member Marlon Castro, a Honduran who lives in Mexico, said the members of the caravan were not scared of the Mexican police and would not stop until they reached the U.S. “Now because of our numbers, they can’t do anything,” he said. “And we have shown we are not scared.” 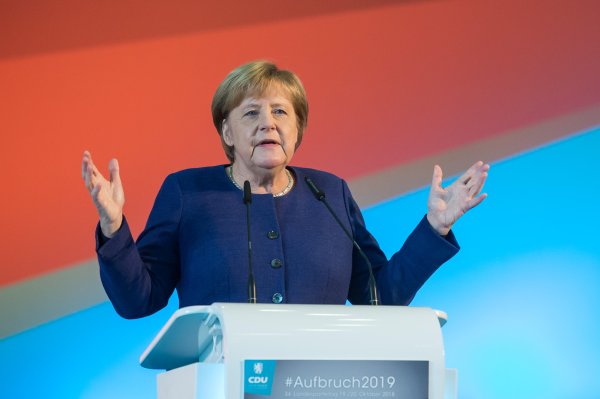 Merkel to Saudis: Come Clean About Khashoggi
Next Up: Editor's Pick