Will Buying Another Device Help Curb Your Smartphone Addiction? Google Thinks So

Courtesy of Google
By Katy Steinmetz

The “smart display” wars are taking off, which means it’s time for consumers to ask themselves that modern existential question: Do I need another screen?

That’s what I was wondering while sitting in the bedroom of a Google employee, whose chic San Francisco home was being used as the backdrop for demos of the company’s new Home Hub device. Major tech companies, one after the other, have launched voice-controlled touchscreen gadgets that are meant to live on your kitchen counter, nightstand or living room table. And Google Homes product manager Ashton Udall was showcasing what this particular one does when you wake up and say, “Okay, Google. Good morning.”

At this prompt, Google’s virtual assistant voiced a greeting, announced the time and weather, then provided an assessment of how bad the commute would be that day. Meanwhile, the bedroom shade — one of the 10,000 or so smart devices that can sync with the Home Hub — automatically rolled up. When the assistant is done going through reminders or previewing events on the Google Calendar, it might launch a news reel. This one had been programmed to segue into classical music instead.

“In the morning, you’re stumbling out of bed, you’re getting the cobwebs out of your head,” Udall said. “I don’t have to go into my phone … You can start just listening.”

Smart displays, though their capabilities vary, are not replacements for handheld devices. They’re not mobile. They’re meant to be shared. The Home Hub is in many ways a smart speaker with a 7-in. screen, which is designed to function as a digital photo frame much of the time. Yet supplanting those handheld devices is a value proposition that Google employees emphasized when I asked why people need this, as if the smart display would function as a Plexiglass partition between me and my smartphone — servicing many of my basic needs and desires without exposing me to distracting, endless notifications.

“The way we designed this is it’s there. You get the help when you need it. It kind of fades into the background and becomes a photo frame when you don’t,” said Diya Jolly, Google’s VP of product management, as she sat on a couch in the airy living room upstairs. “Versus a phone. Every time I pick up my phone, I know I’m going to use it and I’m going to be stuck using it for 30 minutes,” she said, “whether I like it or not.”

2018 may be a year for people to #DeleteFacebook or otherwise question their relationship to technology. But it’s not realistic to imagine that we will go back to a world where we use paper maps instead of Google Maps, she suggested. “Do you want to take everything away?” Jolly said. “Or can we get technology to be productive and not invasive?” That, she explained, was a primary goal in designing this particular device: “How fast can we get your stuff done and get you out of there?”

It’s a kind of depressing thought that the prescription for my smartphone addiction is putting another screen in my bedroom and addressing the bodiless soul of Google first thing in the morning, especially when that company helped make smartphones such a central part of our lives in the first place. But they also make a fair point. The first thing I do most mornings is roll over and check the time on my phone, from whence I fall into a rabbit hole of emails and tweets and news alerts before I’ve even gone vertical for the day.

Research has shown that simply being in the presence of a smartphone — whether it’s our own or someone else’s — tends to make us more anxious and perform more poorly on tasks. So if we want to be more present and attentive to those around us, yet we’re not willing to give up the conveniences of technology, perhaps shifting our reliance to a voice-controlled speaker at home is part of the solution? “Your smartphone is lying around all over the place,” Jolly said. “The whole idea is you don’t have to keep running to your smartphone.”

After the demo, Google sent me home with a device to test out. There were several times it was helpful and also saved me from the rabbit hole, like when I told it to launch Pandora stations or when I asked for orzo recipes and it served up a scroll-able list of options. One of Google’s main selling points for the $149 Home Hub — as with other smart displays — is that it can be helpful in the kitchen, offering ideas based on ingredients and guiding you through the steps of a recipe without requiring that you clean your goopy hands. It will also start rolling tape on instructional YouTube videos when you ask how to carve a pumpkin or change a tire. It’s nifty stuff.

I was starting to get used to having it on my kitchen counter. It was a relief to just bark at the Google Assistant to add things to my shopping list when inspiration hit (something I ostensibly use an app for, but am usually too lazy to see through in the moment). And I repeatedly found myself pausing to watch recent vacation photos cycle through the frame, which automatically adjusts to the light temperature in the room to help the device blend in.

Then my husband came home from a work trip.

When placing the Home Hub in the broader evolution of technology, Jolly said we are in a “one-to-many” phase. For decades, the industry has been optimizing and pushing highly personalized devices. Now tech companies are making gadgets that are meant to be command centers for entire families. And that means everyone in the household has to buy in.

My spouse, who tends toward the belief that too much technology is slowing creating a dystopia in which good people can morph into detached, narcissistic robots, balked at seeing a new screen on the counter. Though Google chose not to put a camera in the device in part so that consumers would feel comfortable putting it on nightstands, he also balked at the idea of inviting a virtual assistant into the bedroom for the “Good Morning” routine.

Yet, by the end of my test run, it was also clear the technology is winning. He too found himself sucked into the digital frame, as it made good use of photos that typically waste away unseen in the cloud. When he asked me to turn down the heat, I verbally outsourced the job to the Google Assistant, who relayed the message to my Nest thermostat, as I got on with making coffee. And while he landed some verbal jabs to make the point that more technology is not always the answer (“Hey Google, do you know where the pens are?”), the device was smart enough to anticipate him in the end.

“Hey Google, self-destruct,” he joked. Rather than making a generic apology for not understanding, as it had in other instances, the device went into a countdown. “Self-destructing in three, two, one,” the virtual assistant said, leading to faux explosions and goofy “boing” noises. “Actually,” the Google Assistant went on, “I think I’ll stick around.” 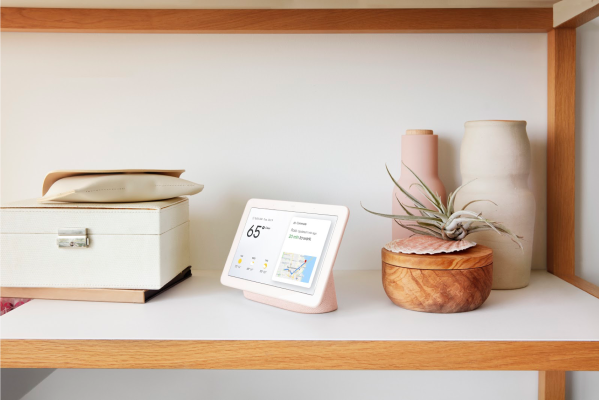 Google’s New Home Hub Doesn't Have a Camera. Here’s Why
Next Up: Editor's Pick