'Everybody Has to Do More.' How Chef José Andrés Is Serving Millions of People Displaced By Hurricanes

José Andrés refuses to turn his back on survivors of natural disasters.

The Michelin-starred chef from Spain had opened critically acclaimed restaurants across North America, and helped to popularize “small plates” dining in the U.S.

But since Andrés started mobilizing volunteers to feed people in the wake of disasters, he’s been celebrated for his humanitarian work as well as his tapas.

On Oct. 19 Andrés flew into New York from the Florida panhandle, where he had been directing relief operations for six days to feed people displaced by Hurricane Michael. TIME national correspondent Haley Sweetland Edwards interviewed Andrés, a two-time TIME 100 honoree, for the latest in installment in the TIME 100 X WeWork Speaker Series; the event took place at a WeWork location in Times Square, New York City. Edwards asked him what drove him to his relief work.

Andrés has been traveling on the tail of crises since he landed in a devastated Haiti after the 2010 earthquake, built a massive operation to provide Haitians with food, and ended up establishing The NGO World Central Kitchen to continue the work. Now WCK puts boots on the ground around the world after events like floods, wildfires and hurricanes, and has served millions of meals to people in need.

“‘We the People,’ I really don’t take that for granted. As an immigrant I received a lot. Every single immigrant in America wants to give back. I learned that sometimes you don’t have to have a passport to belong,” Andrés says. “You become American by the way you behave, by the way you treat others, by the way you show respect for others.”

And it’s that drive to give back that leads him to places like Florida, California or Puerto Rico to make sure people do not go hungry. (Andrés recently released a book, We Fed an Island, documenting his team’s efforts to serve 3.6 million meals in Puerto Rico after Hurricane Maria.)

“We believe we are not perfect, but we are trying to fight for a more perfect America,” he adds. “That’s what I believe in—a country where We the People, Republicans and Democrats—I do believe everybody has to do more.”

For Andrés, that includes minimizing food waste, rising above political mudslinging, and being there when people are hungry. Watch the full video of the conversation above. 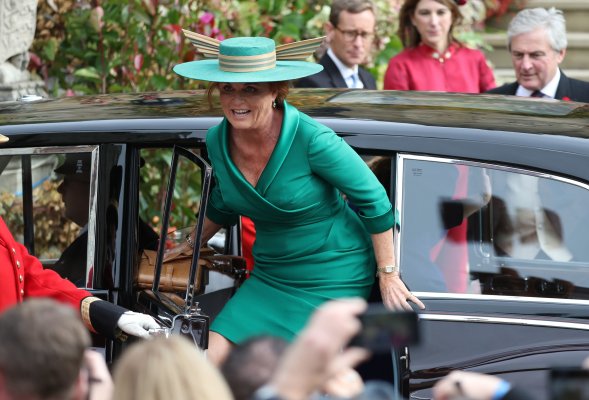 Sarah Ferguson's Royal Wedding Hat Is Ready For Takeoff
Next Up: Editor's Pick