Ideas
By Tawakkol Karman
Tawakkol Karman won the Nobel Peace Prize in 2011. A Yemeni journalist and human rights advocate, she supported the Arab Spring uprisings and has become a vocal critic of both sides in the ongoing civil war in Yemen.

Karman was a friend of missing Saudi journalist Jamal Khashoggi, who was allegedly killed and dismembered in the Saudi consulate in Istanbul. She has called for an independent, international investigation into his disappearance. Karman spoke to TIME on Oct. 18 at the One Young World Summit in The Hague.

The last time I saw Jamal Khashoggi was two months ago, when we were both living in Istanbul. We had been in touch since 2011, when the Arab Spring began; it brought us closer together.

Jamal always believed in reform, not revolution. It was something we discussed many times. I believe that there is no way to work under dictatorship; the solution with dictators is to overthrow them, to build a new state that depends on democracy and freedom. But Jamal believed in reform. He didn’t say anything that was really against the Saudi Royal Family; he didn’t encourage people to revolt against them. The only thing he was looking for was freedom of expression.

But Saudi Arabia still couldn’t accept this voice. Jamal demanded just the minimum of rights, just the right to express himself. And this is the result.

Jamal was lured by his government to a consulate in another country and then killed, his body dismembered. He paid such a high price. He paid with his life for the right to speak and the right of people to speak. It’s a huge loss for the people of the Middle East.

Saudi Arabia showed the world their policy of dealing with any kind of criticism. It is state terrorism, and the perpetrators shouldn’t escape justice.

Look what they did to a very prominent, well-known citizen like Jamal Khashoggi. They cut up his body inside their consulate because they did not fear the consequences. They didn’t do it because they are stupid; they did it because they want to terrorize their people. Saudi Arabia wants to spread fear among their citizens and among their critics. They trust that they will be able to buy silence from the international community with their oil money.

What happened to Jamal reflects what is happening in my country, Yemen.

The Saudis are killing thousands of civilians in Yemen. They want to occupy Yemen and steal its wealth, and they are doing exactly that. Their main goal is not a war against the Houthi militias, it is to spread their influence. It’s to make Yemen a failed state.

I hope the case of Jamal Khashoggi will make the U.S., U.K. and France wake up to this. What happened to Jamal should open their eyes, and make them stop fueling the war in Yemen. It’s important to move now. If not, it will send a very negative message to every dictator around the world — that they have the green light to use brutality and no one will ask them to stop.

Jamal was a great supporter of the Arab Spring, and he was the voice for a lot of people. The Arab Spring is either attacked or ignored by the international community. But it hasn’t failed; it’s just the beginning. People in Syria, in Libya, in Egypt — they are still there, still making sacrifices, still dreaming.

You can’t judge any revolution or any small transformation by one or two years or 10 years. The French Revolution and American Revolutions took more than 100 years. How can we judge that the Arab Spring has failed in seven years? It succeeded in toppling some dictators. Now there is the counter-revolution, which has become uglier and more brutal because the international community has been silent. But the Arab Spring will not stop until we have achieved our goals.

I believe that when Jamal Khashoggi started to raise his voice, he knew he would pay this cost.

It’s the same thing we realized when the Arab Spring began, at the start of our struggle for freedom. We knew we would pay a high price. But we also knew it would not be for nothing. This high price will lead to real freedom, democracy and real rule of law.

We know this revolution is a worthwhile sacrifice. And even if we don’t get a chance to enjoy the freedoms we are fighting for, our children will.

As told to Naina Bajekal 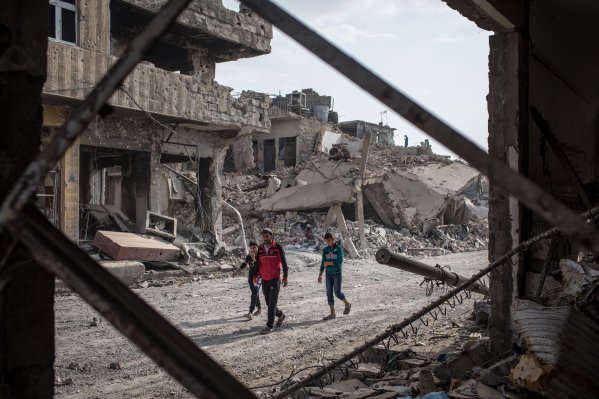 Nick McDonell Counts the Innocent Lives Lost in the Post-9/11 Wars
Next Up: Editor's Pick