The Week That Saudi Arabia's Crown Prince Lost His Luster

In this series of columns, I’ll be giving you a short primer of a story in the week’s news — including what to know, why it matters, and what is likely to happen next. First up, the story that has been dominating global headlines all week: the Jamal Khashoggi affair.

What happened this week:

The mystery over what happened to Saudi dissident and Washington Post columnist Khashoggi—who was seen walking into the Saudi consulate in Istanbul on Oct. 2 but never seen walking out—continues to deepen, as President Donald Trump comes closer to conceding the Saudis might have been responsible for his murder.

Beyond the personal tragedy it represents to his family and friends, the Khashoggi disappearance matters because it’s a test case for the GZero world we now live in, one absent any true global leadership. Will foreign leaders now be allowed to kill critics with impunity, even on foreign soil? The Skripal poisonings in the U.K. earlier this year hinted at this same question, but the overwhelming evidence in the Khashoggi disappearance now makes this question impossible to ignore.

But the Khashoggi case matters also because it directly calls into question the methods and thought-process of Saudi Crown Prince Mohammed bin Salman (MBS), who is in the process of an ambitious transformation of the Saudi Kingdom both at home and abroad. Did the Saudi prince order the killing of Khashoggi, consequences be damned? Did he figure the disappearance of a single journalist in Istanbul would go unnoticed? Was it simply an accident, the result of an interrogation gone wrong, as press reports said the Kingdom was preparing to claim? Or was it those “rogue” Saudi elements that Trump alluded to?

The only answer that ostensibly exonerates MBS is going the “rogue” route, but that leads to other questions—if there really are rogue elements operating abroad like this, how tenuous is the Crown Prince’s grip on power? If they weren’t actually rogue actors but acting on MBS’s orders, what will be their punishment be for a world that’s demanding justice? And what message will that send to the rest of MBS’s entourage who see colleagues that were just following orders so willingly sacrificed on the altar of global opinion?

No matter what, MBS emerges from this episode weaker than he was just two weeks ago. That’s bad news for the U.S., and bad news for stability in the Middle East.

In all likelihood, a solution will be found to allow MBS to muddle through the current political crisis with limited blowback. U.S.-Saudi relations will remain more or less the same, and Saudi oil will stabilize global oil markets as the U.S. begins turning the screws on Iran… but MBS’s luster is now tarnished, probably irreparably. That tamps down the enthusiasm for outside investment into Saudi Arabia.

This is not to say foreign investors won’t continue doing business with the Kingdom—they certainly will. But it will be more difficult to convince investors to do business with the Saudis given the reputational risks now involved, reputational risks which had been temporarily swept under the rug with the political rise of a “reformer” like MBS. And the transformation of Saudi Arabia from petrostate to cutting-edge modern economy as laid out in Vision 2030—always a longshot, even under the best of circumstances—now loses critical momentum.

The biggest misconception about it:

That this reveals MBS isn’t a true reformer. He very much is — but not in the way people in the West typically think about reforms. MBS has unquestionably begun liberalizing Saudi society, and has been the driving force behind issuing Saudi women drivers licenses, bringing more women into the workplace, defanging the religious police, and so on. Those are all legitimate reforms… but MBS can’t stand any criticism while he’s doing them. The reforms are a gift, not an opening for more examination and criticism. That makes his own life more difficult — and means we can expect more collateral damage as he attempts to shape the Saudi kingdom in his own image.

What to read next:

This op-ed written by Khashoggi’s fiancé, Hatice Cengiz. While we all talk about the geopolitical fallout of the Khashoggi disappearance, it’s easy to overlook that this whole story is about a man who had hopes and dreams. Those ambitions cost him his life, and the people that will bear the brunt of that aren’t politicians and world leaders but his family, who will mourn his sudden disappearance long after global news moves on to something else.

The key quote that sums it all up:

“I don’t want to talk about any of the facts. [The Saudis] didn’t want to either, in that they want to have the opportunity to complete this investigation in a thorough way.”

U.S. Secretary of State Mike Pompeo, upon landing in Turkey from his trip to Riyadh and being asked whether the Saudis said anything about Khashoggi being alive or dead. 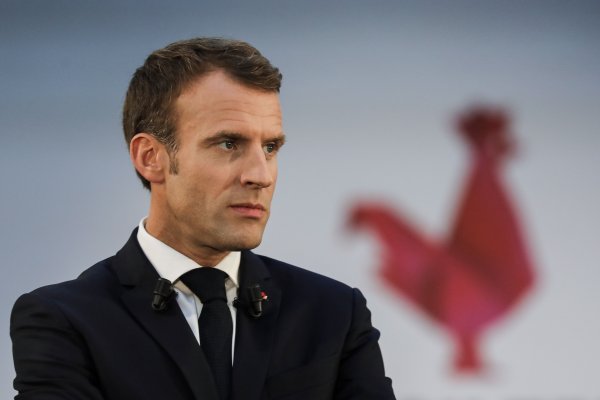 Emmanuel Macron Wants to Be Globalism's Champion. Here's Why He's Failing
Next Up: Editor's Pick