A number of South Africans have banded together in support of a rape accuser who endured a grueling cross-examination during a nationally televised trial this week.

Cheryl Zondi, 22, has faced a slew of questions over the last three days regarding her alleged rape by Timothy Omotoso, 60, a pastor currently on trial in Port Elizabeth on rape and human trafficking charges. He and co-accused, Lusanda Sulani and Zukswa Sitho, face 97 charges in total, including counts of rape, human trafficking and sexual assault.

Zondi has accused Omotoso of raping and sexually assaulting her starting from the age of 14, South African outlet News24 reports.

During her testimony, Zondi faced a series of questions from defense attorney Peter Daubermann that have stoked outrage among her supporters in South Africa, including about Omotoso’s penis and how far he penetrated her, according to South African newspaper The Herald.

Zondi having to endure such intense questions prompted the anti-gender-based-violence campaign #TotalShutDown to bring protesters together outside the courthouse and mobilize supporters online.

“Zondi is brave and represents all the rape victims whose cases are thrown out of court because they didn’t have the strength to continue with the brutality of the cross-examination process,” Nolitha Jones, an activist who joined the campaign to support Zondi, told The Herald.

Zoe Charles, who showed up to protest with #TotalShutDown, told the South African Broadcasting Corporation that rape and sexual assault victims are too afraid to come forward — and that the defense team’s aggressive style of questioning did not help matters.

“They see what’s happening with the Daubermanns of the world, re-victimizing you on the stand, not listening to you when you answer your questions honestly,” she said. “We’re trying to say, ‘stop dehumanizing us on the stand, listen to us when we speak.'”

People shared their support for Zondi online too through the hashtag #TotalShutdown.

As activists rallied for Zondi, other protestors outside the courthouse grouped together in support of Omotoso. Gretchen Sudenie, a #TotalShutDown spokesperson, said she was alarmed to see the number of women coming out to support Omotoso.

“We won’t blame the women,” she said. “I love them and I know that they have been brainwashed and there is nothing one can do to change their state of mind.” 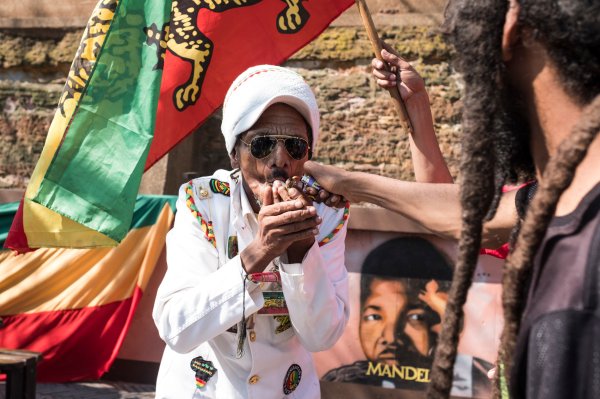