It’s Time for Americans to Take Back the Vote

Ideas
By Eric Holder
Holder, who served as U.S. Attorney General from 2009 to 2015, is the chairman of the National Democratic Redistricting Committee

If a student moves from one campus dorm to another, they could be forced to register to vote in a completely different congressional district.

Until 2016, the school’s predominantly African-American student body voted in the state’s 12th Congressional District. But after federal courts found that Republicans had illegally divvied up North Carolina’s congressional map by race–including in the 12th District–to help ensure that the party would have far greater power than its voter support would merit, Republican state legislators crafted a new congressional map based on partisanship instead. One result of their effort was to divide the North Carolina A&T campus in half, cracking the school community and leaving the students with diminished voting power.

While Republicans in North Carolina have been particularly brazen–one state representative even admitted that in 2016 they drew themselves into a 10-3 majority in the congressional delegation because they were simply unable to create a map with 11 Republican seats–their attempts to suppress the vote are part of a much larger national effort. While literacy tests, the poll tax and Jim Crow are now of a bygone era, new methods have been enacted to facilitate discrimination and voter disenfranchisement. In many places, Republicans have fundamentally changed the electoral system in a way that undermines the principle of “one person, one vote.”

There have been two defining moments in these efforts. The first came after Republicans gained majority power at the state and local level during the 2010 midterms. In the 2011 reapportionment of seats, the GOP locked themselves into power through unprecedented gerrymandering, the practice of drawing absurdly shaped voting districts for the sake of outsize political advantage. This happens often through a combination of consolidating–or packing–the opposition’s voters into a minimal number of districts when possible or otherwise widely distributing–or cracking–them so that candidates supported by these voters can be more easily defeated.

In June, the Supreme Court mistakenly declined to rule on two major relevant cases. One was in Wisconsin, where Republicans drew laughable maps–but the other was in Maryland, where Democrats ensured that seven of the state’s eight congressional seats went to that party, in a state that in 2014 elected a Republican governor. There is a history of both parties using gerrymandering to their advantage, but recent inappropriate redistricting efforts have by far been the creation of Republicans. And the impacts of their efforts have been profound and enduring.

While I’m confident there will be a blue wave in the upcoming midterms, I’m concerned that it will be weakened by a gerrymandered Republican seawall. Some research shows that Democrats will have to win the national popular vote by up to 11 percentage points just to win back a slim majority in the House of Representatives.

This weakens our democracy. It makes some voters’ ballots more powerful than others. And by eliminating truly competitive elections, it encourages politicians to vote for laws that put the interests of a few before the well-being of all, with no electoral consequence.

The second defining moment was the fallout from the Supreme Court’s 2013 Shelby County decision, which, under me, the Justice Department opposed. The decision was centered around a key element of the Voting Rights Act of 1965, which made more difficult the enactment of discriminatory state laws or practices that sought to disenfranchise voters of color. The act was largely responsible for minimizing racially based voter discrimination in substantial parts of the country. Under the law, jurisdictions with a history of discriminatory behavior had to “preclear” with the U.S. Department of Justice any changes to voting laws or procedures that might affect minorities. The legislation had an astounding effect: In Mississippi, the percentage of the eligible black voter population increased from not even 7% in 1965 to nearly 60% in 1967. But in Shelby County, the court’s conservative members wrongly killed the preclearance process.

As Justice Ruth Bader Ginsburg wrote in her prescient dissent, “Throwing out preclearance when it has worked and is continuing to work … is like throwing away your umbrella in a rainstorm because you are not getting wet.” Starting right after the decision, many states–including several that had been subject to preclearance–started enacting harmful and unfair election laws and procedures.

They have done so under the guise of “electoral integrity” and unfounded claims of widespread voter fraud. An individual is more likely to be struck by lightning than cast an in-person bogus ballot, the Brennan Center has reported. Yet since the 2010 elections, 24 states have instituted voter-ID laws or other unnecessary voting restrictions that suppress the vote in minority and poor communities.

It’s not a coincidence that the most gerrymandered state legislatures pass some of the most restrictive voter-ID laws. In North Carolina, a federal judge found in 2016 that a pernicious voter-ID law passed by the legislature targeted African Americans with “almost surgical precision.” In Wisconsin–a state Hillary Clinton lost by around 23,000 votes–a voter-ID law prevented perhaps as many as 45,000 voters from casting a ballot in 2016. In Texas, people can vote using a state-issued concealed-carry permit but not a state-issued University of Texas student ID.

These attacks on the franchise will continue up until Election Day and beyond, unless addressed head-on. In Georgia, Brian Kemp, the secretary of state who also happens to be the Republican nominee for governor, has stalled the voter registration of more than 53,000 people, about 70% of whom are people of color, per an Associated Press analysis. His opponent is Stacey Abrams, a woman who would be the first female African American ever elected to lead a state. In North Dakota, Republicans in the state legislature passed a voter-ID law that disproportionately affects Native Americans, a voting bloc that overwhelmingly supports Democratic Senator Heidi Heitkamp, who won by just under 3,000 votes in 2012 with the help of Native Americans. On Oct. 9, the Supreme Court effectively upheld the law. In June, the court allowed the Republican secretary of state in Ohio to continue purging voters from the rolls, a practice that could become more widespread across the country if Republicans continue to hold state-level power.

While the voting-rights landscape may seem dire, there is a path forward. If Americans can build fair maps during redistricting in 2021, we can turn the tide back toward fairness and common sense in our politics and elect officials at the state level who will overturn voter-disenfranchisement laws in our country.

We can’t take our democracy for granted. The system is being tested, but this is not a time for despair; it is a time for action and strength. We should never underestimate what is possible when Americans come together to fight for their most basic right–the right to vote. Nothing more than the fate of our nation is at stake. 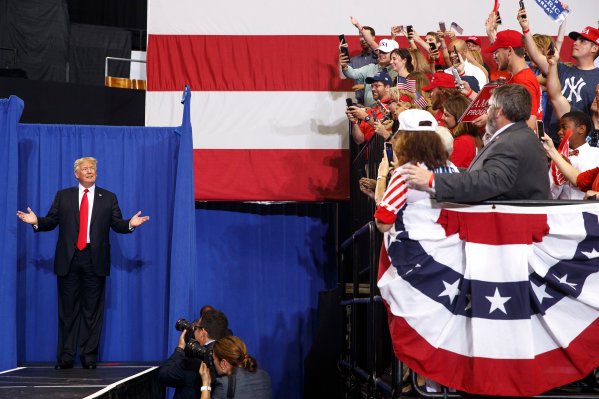 How the Midterms Will Test Trump’s Hold on the GOP
Next Up: Editor's Pick