Japan's Tricky Balancing Act Between the U.S. and China

Despite what you may have heard from a certain U.S. President, trade wars are both difficult and hard to win. Even more difficult? Being invested in the outcome of a trade war with limited ability to affect it. Case in point: Japan, which is eyeing the unfolding trade drama between China and the U.S. with increasing concern.

According to Pew Research Center, just 24% of the Japanese population has confidence in U.S. President Donald Trump; their confidence in Chinese President Xi Jinping barely cracks double digits at 11%. But even if Japan had more faith in the principal players involved, Tokyo would have every right to be on edge. Should relations between China and the U.S. take a dramatic turn for the worse, Japan is on the sharp end of the spear. Economically, the two countries represent by far Japan’s largest export markets at around 20% each. Geopolitically speaking, its proximity to China and its dependence on a U.S. whose President shows a lack of commitment to long-standing allies and treaty obligations make it vulnerable.

Japan understands this and did so long before the rest of the world caught on. It’s the reason Japanese Prime Minister Shinzo Abe jumped on the first flight to New York City following Trump’s election-night victory. Even before Trump took the oath of office, Abe understood that for him, alliances are built on personal relationships and transactional exchanges, not historical ties.

So far, Abe has done as much as one can reasonably expect a Japanese leader to do to accommodate that reality. He has met with Trump more than any other world leader; when Abe visited Mar-a-Lago last spring, Trump vowed to support Japan because Abe was his “good friend.” Japan has joined the U.S. and the European Union in co-sponsoring a proposal to reform the World Trade Organization to strengthen enforcement against countries that subsidize certain industries, an obvious swipe at China. And unlike the E.U., Japan has taken a much more muted approach to Trump’s steel and aluminum tariffs, pushing back against them quietly while at the same time signaling to the U.S. Administration its willingness to enter into formal bilateral trade negotiations, which has long been a priority for Trump.

But Abe also understands that the current U.S. President is nothing if not mercurial, which means he needs to hedge. It’s no coincidence that Japan just announced that Abe will be traveling to China on Oct. 25, his first official visit in seven years, complete with a trade delegation of 579 companies and numerous business leaders in tow. There has even been talk about the possibility of Japan’s joining China’s Asian Infrastructure Investment Bank (AIIB), which is Beijing’s answer to the Washington-based International Monetary Fund (IMF) and World Bank. Under Barack Obama, the U.S. declined to join the development bank, even as European allies like France, Germany and the U.K. decided to sign up. Back then, Japan stood fast with the U.S. Now times have changed, and political calculations along with them.

Of course, the reality of Japan’s precarious situation is that this hedging strategy works only so long as U.S.-China relations don’t completely go off the rails. Should that happen, Japan would have little choice but to side with its close ally the U.S.–but from a position of weakness rather than one of strength. And if you don’t think that matters to someone like Trump, you haven’t been paying enough attention. Watch this space. Japan certainly will be. 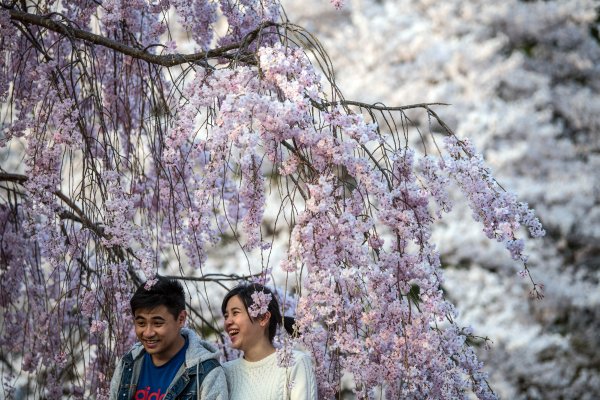 Here's Why Japan's Cherry Trees Are Blossoming in October
Next Up: Editor's Pick