Taylor Swift was apolitical for the bulk of her career, but this year she is taking a stand and using her platform to encourage people to vote–and now, to vote early.

In an Instagram post, Swift encouraged her fans to take advantage of early voting, which lets voters submit their ballots before election day. “Something I wish I knew about when I was 18 and voting for the first time: ✨EARLY VOTING✨,” Swift captioned a photo of her toes painted red, white, and blue. “It makes it so quick and easy to go and cast your vote before November 6. Early voting starts TODAY in Tennessee and goes to Nov 1 🇺🇸.” She also included a link to Vote.org’s Early Voting Calendar.

Swift’s newly political Instagram feed is a surprising change for the Reputation singer who remained mum on political matters for the bulk of her career, even staying silent at the height of the 2016 presidential election cycle. It all changed, when Swift broke her long-standing political silence on October 8th, when she shared a voting post to Instagram urging fans not just to vote, but to vote Democratic. “In the past I’ve been reluctant to publicly voice my political opinions, but due to several events in my life and in the world in the past two years, I feel very differently about that now,” Swift, a Tennessee native (and Tennessee voter) wrote in an Instagram post, adding: “As much as I have in the past and would like to continue voting for women in office, I cannot support Marsha Blackburn. Her voting record in Congress appalls and terrifies me.” Citing Blackburn’s stance on LGBTQ rights and her refusal to vote for a re-authorization of the Violence Against Women Act, Swift then threw her weight behind Tennessee’s Democratic Senate candidate Phil Bredesen.

Since breaking her silence, she has been an ardent supporter of voting, even encouraging people to vote during her time on stage at the 2018 American Music Awards. 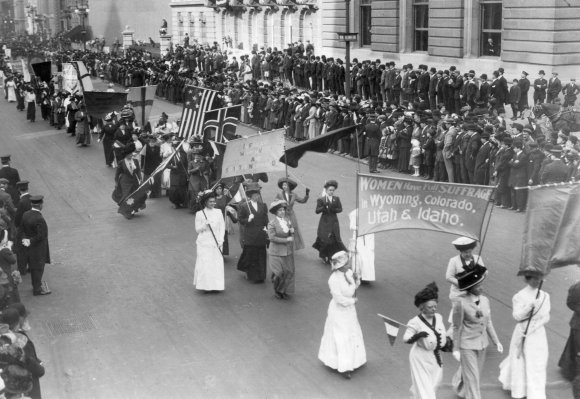 Colorado Was the First State to Enfranchise Women Through Popular Referendum. Here's How It Happened
Next Up: Editor's Pick