Ideas
By George J. Mitchell
Senator George J. Mitchell represented Maine and served as Majority Leader of the Senate. He later served as Chairman of the Northern Ireland Peace Talks and as U.S. Special Envoy for Middle East Peace. He is now Chairman Emeritus of the international law firm DLA Piper.

In the seventy-five years before 1945, Europe was devastated by three major land wars. The last and most destructive, the Second World War, resulted in the deaths of 63 million people, in a world with a population of about a third of today’s.

The American and British leaders who mapped out the reconstruction of the continent realized that in the past trade wars had become real wars, so high on their agenda was the establishment of international rules of trade. Their goals also included the creation of political, economic, and military alliances to bind Europe together.

The United Nations, the European Union, NATO, the World Bank, the International Monetary Fund: all were part of the effort to provide stability and to promote prosperity through an increase in trade. Freedom, democratic capitalism, and collective security were the American-led answers to fascism, communism, and unrestrained nationalism. Though the results were imperfect, their efforts were largely successful.

But one of the largest success stories of the post-WWII order is now at risk. The European Union is at risk of dissolution, triggered by the departure of Britain. Since the country voted in June 2016 to leave the E.U., the negotiations over its terms of withdrawal have become increasingly bitter. All signs point to the U.K. leaving the bloc without any kind of agreement in place on its future relationship with the E.U. — a so-called “no deal Brexit.”

This outcome would be in no one’s interest. It would be harmful to the economy of the United Kingdom, and to every E.U. member state who trades or does business with it. It could lead to other European countries turning against or even leaving the E.U.

The increase in commerce and in the free movement of people in the past twenty years has benefited people and economies on both sides of the border. The steep reduction in negative stereotyping and demonization, so deep and widespread in the preceding century, has enabled both societies to emerge successfully into the twenty-first century. If checkpoints return to Northern Ireland the risk of a resumption of violence, though impossible to measure with precision, would likely increase. We all must hope and pray that is not the case.

Last December, the European Union and the U.K. government promised that whatever the outcome of their negotiations there would not be a hard border between Northern Ireland and Ireland. They must keep their promise. If they do not the consequences will be severe for all.

These consequences also affect the United States. A divided and weakened Europe would mean the loss of a valuable democratic ally for the U.S. in its dealings with large hostile powers and with the massive upheaval that is likely to continue in Asia and Africa.

Our ties with Europe predate the establishment of our country. We gained our independence from England by revolution, but we retained England’s language, the spirit of its laws and many of its customs. Although our early relations were hostile, over time the two countries formed what remains a “special relationship.”

As our nation grew to settle a vast continent, we welcomed millions of immigrants from Britain, Ireland, Germany, France, Greece, Poland, Scandinavia and many more. As a result, we share deep bonds of blood with Europe, not just legal relationships.

These historic alliances are being tested. President Trump has stalled a trade agreement with the European nations; has withdrawn from the Paris climate accord; from the agreement with Iran on its nuclear program, and from the Trans-Pacific Partnership, all in his stated belief that multilateral deals are not in our country’s best interests.

I believe the opposite. Our cooperative efforts with our historic allies are in American’s interests. The recent agreements, and the post-World War II institutions, have benefited those who participated in them — including, and especially, the United States.

In a world in which there is no NATO, no European Union, no World Trade Organization, no UN, constant trade wars could once again lead to real wars. The United States, as the dominant power, invariably would be called upon to lead alone.

We should not think of Europeans primarily as adversaries. They also are our partners. Although they do not always agree with us, or even among themselves, for the most part they admire our country and share our values and interests.

It is in everyone’s interest that we do all we can – politically, economically, militarily and otherwise – to help the people of Europe and elsewhere to remain free, democratic, united, and prosperous. 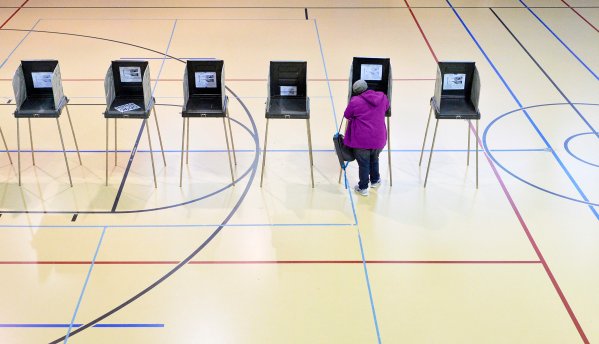 It’s Time for Americans to Take Back the Vote
Next Up: Editor's Pick