Kanye West and Kim Kardashian West met with the President of Uganda, Yoweri Museveni, on Monday. The pair have been in Uganda since Friday, while West reportedly films a music video.

West grabbed lighthearted headlines by gifting Museveni a pair of his Yeezy sneakers and referencing Jurassic Park while talking about tourism in Uganda. “We’re not here to take a photograph and look like we’re doing something positive,” he said. “This is going to be like Jurassic Park.”

But the celebrity couple came in for rather more serious criticism online for meeting with Museveni, who has been president since 1986 and has recently presided over an authoritarian crackdown against political opposition and homosexuality.

The Ugandan musician-turned-lawmaker Bobi Wine, who has criticized Museveni, was arrested in August and says he was tortured in custody before his release in September.

Wine said Tuesday that it was “immoral” of West to use his influence to “rub shoulders” with Museveni. “He is hobnobbing with a president who has been in power now for 32 years and restricts any freedom, a country where opposition activists are tortured and imprisoned,” Wine said.

Jonathan Van Ness, a host of the popular Netflix show Queer Eye, tweeted, “Hopefully Kim & Kanye are in Uganda advocating for its LGBTQ citizens who face a government that has one of the worst records on LGBT rights & safety anywhere in the WORLD, giving President Museveni a pair of shoes, while he advocates for gay men to be burned in public.”

In 2014, Museveni pushed through Uganda’s Anti-Homosexuality Act, which would make homosexuality punishable by life imprisonment. The act has been referred to as the “Kill the Gays Bill,” as its original version called for the death penalty.

Later in 2014, Uganda’s Constitutional Court invalidated the law. But gay people still face discrimination in Uganda, according to Mausi Segun, the Africa director of Human Rights Watch. “People who express LGBT sexuality in public have received threats and intimidation,” she tells TIME. “The general homophobic tendencies in the Ugandan public still exist.”

Video was shared of West and Kardashian West meeting Museveni, but it did not include footage of the entertainers raising human rights issues with the 74-year-old leader.

“If Kanye and Kim would use their popularity and their access and the platform that they have to push for human rights, we would welcome that,” Segun said. “The big issues are repression of activists and political opposition leaders. A lot of this has been really violent.”

Representatives for the couple did not immediately respond to a request for comment.

Museveni himself tweeted a welcome to the celebrity couple. “I held fruitful discussions with the duo on how to promote Uganda’s tourism and the arts,” he said. “I thank Kanye for the gift of white sneakers.”

West has been criticized for his enthusiastic embrace of U.S. President Donald Trump. Last week, he met with Trump in the Oval Office and advocated repealing the 13rd Amendment to the U.S. Constitution, which outlawed slavery. 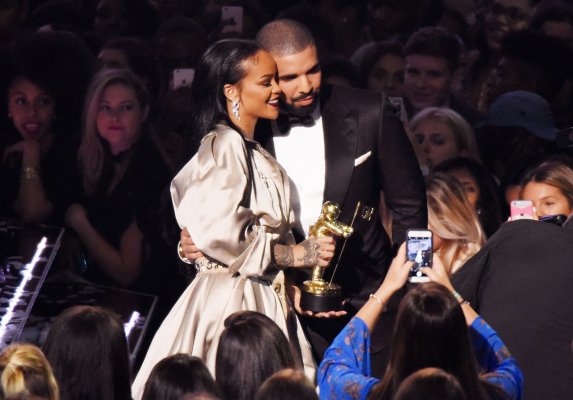 'In His Feelings.' Drake Says He Wanted to Marry Rihanna and Have a 'Perfect' Family With Her
Next Up: Editor's Pick